The largest anti-fracking demonstration yet confronted the state government in Sydney, Australia, on May 1. As many as 10,000 rural and urban activists marched to protect land and water from the Coal Seam Gas exploiters. 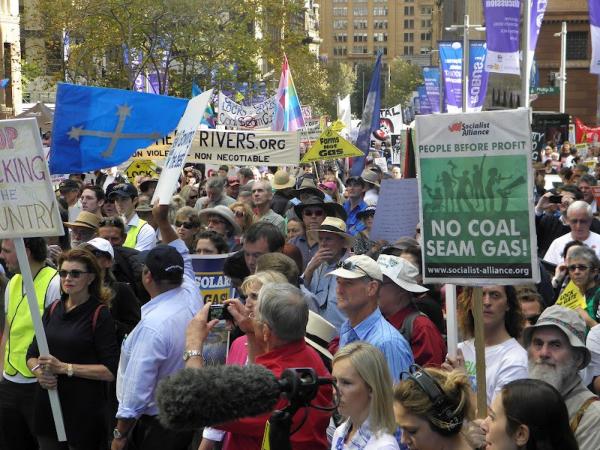 The largest anti-fracking demonstration yet confronted the New South Wales government in Sydney, Australia, on May 1. Press reports of the number of participants ranged from 4,000 to 10,000. Rural and urban activists marched to protect land and water from the Coal Seam Gas exploiters.

Prior to the action,  NSW Resources & Energy minister Chris Hartcher attempted to cut  rural support by warning that the protest was run by “professional political organisations masquerading as grassroots community groups,” including the Socialist Alliance. Obviously, the red-baiting attack failed.

Stop CSG Sydney issued the following statement after the protest:

Residents of the inner west joined farmers, environmental activists, the Country Women’s Association, community groups and industry groups from across NSW in a massive rally at Martin Place today.

Jacinta Green, President of Stop CSG Sydney said: “Our group formed in response to learning that a CSG well had been approved in our backyard — St Peters — without even talking to us. While most of us initially came together over local concerns, we quickly realised that issue was much greater than our backyard.

“We joined in with what is surely the most diverse display of support for a single issue, the largest social movement Australia has ever seen. Never before have so many people with so many differing opinions and backgrounds agreed on a few simple messages.

“To see the Country Women’s Association standing side by with Occupy Sydney, inner city residents, farmers from the North West, the Hunter Valley Vineyard Association is a dramatic snapshot of the broad reaching impacts and concerns around inappropriate mining and CSG.

“The Barry O’Farrell government has failed to live up to a critical election promise — to protect prime agricultural land and our water. The government has also failed to even acknowledge the threat of CSG in urban communities.

Pip Hinman, a spokesperson for Stop CSG-Sydney said: “To see the incredibly broad support here today strengthens our resolve to continue the fight to stop coal seam gas mining until the health and environmental impacts have been properly investigated.

“The display of unity from rural and urban communities sends a clear message to the government. It must listen.”

See slideshow of the May 1 demo here

Below: two videos from the protest, and an article published the day before the action in Green Left Weekly .

Communities unite to save land and water

Communities throughout NSW are battling an expanding coal seam gas (CSG) industry and new government guidelines that allow coal and CSG mining in most of the state.

The battle over “unconventional gas” mining, which includes CSG, shale and tight gas, is also spreading across Australia, as companies and governments try to cash in on the gas rush. Federal minister for regional Australia Simon Crean said last year that Australia will become “the Saudi Arabia of gas.”

Communities are angry that the Barry O’Farrell government in NSW is allowing the short-term interests of big coal and CSG companies to come ahead of the protection of water supplies and productive land.

In Gunnedah, NSW planning minister Brad Hazzard had to walk through protesters holding anti-coal and CSG placards to get to a March 20 town hall meeting where he defended the government’s new Strategic Regional Land Use Plans (SRLUP).

“We left the meeting angry and frustrated. The resource management strategy of the NSW government is unconscionable. It is a betrayal of the people who trusted the messages and assurances given prior to the election last year.”

In the Riverina, Lock The Gate’s (LTG) Jacinta Green slammed the NSW government announcement of new exploration licences during a flood crisis.

She said the government was ramming through new licences at the same time as allegedly “consulting” around new draft guidelines designed to “manage” land and mining conflicts.

As concern over water security grows, the group Save Our Water Catchment Areas (SOWCA) says it is outraged that the Sydney Catchment Authority (SCA) has been “purged of catchment defenders.”

The group said key positions were axed “to reduce the likelihood of [catchment authority] board resistance to a government determined to mine and extract anything from anywhere, including from within our vital drinking water catchments.

“The pro-environment membership of the SCA board needs strengthening, not purging.”

SOWCA is also concerned that catchment authority objections are regularly overruled. The Sydney and Illawarra water catchment areas have been excluded from even the limited protection of the government’s land use guidelines.

A CSG exploratory well was recently drilled in Oakdale, next to Sydney’s water catchment area. Campaigners have pointed out the irony that areas around the water catchment are off-limits to bushwalkers, but are open to CSG companies.

The new Liberal-National government has moved rapidly to “restore confidence in the CSG sector” with a new commission to “balance the interests of companies, farmers and environmentalists”.

The Gasfields Commission has been backed by big CSG company AGL.

AGL is pushing into western Queensland. There are already 20,000 approved CSG wells in the state, a figure that could double.

The Queensland Department of Environment has lost 70 positions in the past two years.

Communities and local councils are fighting back. People packed out a March 21 Bass Coast Council meeting to cheer a resolution committing the council to oppose CSG.

Colac Otway Shire Council followed suit when it voted on April 26 to call on the Victorian government to place a moratorium on CSG.

Resistance to the gas push is also growing in Western Australia.

A 150 person “No Fracking WAy” rally in Perth on April 21, which called for a moratorium on unconventional gas until it could be proven safe for health and the environment, was met by a heavy-handed council and police response.

Perth council, supported by the WA police, confiscated placards, banners, leaflets and petitions, and issued move-on notices to people who refused to comply.

Protesters are angry that the WA environment minister has recently given the go-ahead for mining companies to frack the Perth Basin.

To help get a sense of the breadth of Australia’s “gas boom” and to record the resistance, online campaign group GetUp! have developed an interactive map showing CSG reserves and mining wells across Australia, and the water aquifers that may be affected by CSG activity. GetUp! is encouraging campaigners to also reflect their movement on the map.

Communities are getting organised in creative ways to challenge the corporate and government CSG assault.

Almost the entire community of The Channon turned out on April 15 to reject the Northern Rivers becoming a gas field. Instead, the 400 residents declared the area a CSG Free Region, after a community door-to-door survey had found 99% of residents wanted to keep CSG out of the region.

Lismore Mayor Jenny Dowell declared CSG to be “the biggest threat to our community since World War II”.

The declaration seeks to protect the Northern Rivers’ “unique soil, water and biodiversity, and its status as an important region for food growing.” While without legal weight, organiser Annie Kia said the declaration carries “moral and social power”.

Other communities have followed. More than 300 people in nearby Nimbin declared the town CSG free on April 22, in what Dowell called “a rolling movement across our region”.

One of the strongest groups challenging CSG is preparing the ground for a mass community blockade of any CSG wells in the Illawarra. Following a 400-strong community conference, Stop CSG Illawarra says it will blockade any CSG activity in the region.

The group said: “We feel it’s a course of action we’ve been forced to follow given the NSW government’s blind, ongoing support for the industry.”

Stop CSG Illawarra point out that not only has the local community demanded a moratorium on CSG, but 74% of NSW residents, and 68% of Australians nationwide, support halting the CSG industry.

Despite this “the government continues to represent the industry”, so Stop CSG Illawarra say they have no choice but to implement a peaceful, well organised ‘people’s moratorium’ blockade. The group has called on supporters to provide blockade resources such as caravans, gazebos, laptops and entertainment.

The movement against CSG will broaden further on May 1. The NSW Farmers will converge on the NSW parliament, marching alongside Lock The Gate, the Country Women’s Association, the Nature Conservation Council, GetUp, Stop CSG Sydney, Stop CSG Illawarra and others, united in one message: protect our land and water.

As The Channon’s CSG-free declaration says: “our opposition is nonviolent, but non-negotiable.”