South African Metalworkers Union: “Reducing global warming requires fundamental restructuring of the capitalist system. At the centre of such restructuring is the question of who owns the means of energy production, transmission, distribution and consumption.” 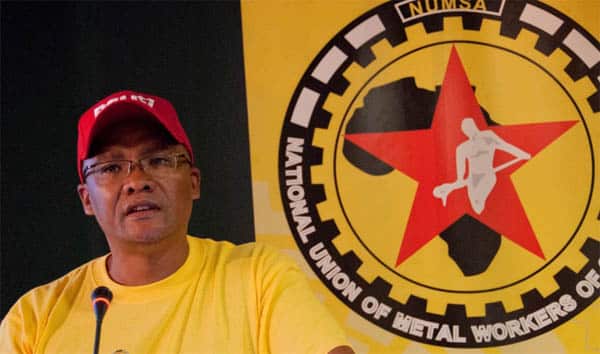 [The following paper was presented on October 10, 2012, at a conference at Cornell University. NUMSA is South Africa’s second-largest union, with almost 290,000 members in the smelting, manufacturing, auto and electricity generation industries. Thanks to Links International Journal of Socialist Renewal for making it available.]

Our starting point as NUMSA is that to effect an energy transition, we as the global union movement DO need a perspective to guide us as well as strategies to be utilised by the movement. While such a perspective and accompanying strategies will definitely not come fully formed and in one go, we HAVE to keep working on them through discussions, through struggles, through experimentation and through learning from experiences of those in the forefront of energy struggles (within and outside of the labour movement).

Those who were at our February 2012 International Conference on Building a Socially Owned Renewable Energy Sector will know that in our head office in Johannesburg, we have a huge banner with the words: No Revolutionary Theory, No Revolutionary Movement! The slogan on the banner captures how much we, as a union attach to having a perspective that acts as a compass to our daily work. Our message to this roundtable is simple: Without a solid perspective on how to effect an energy transition, there will be no transition.

Let me now share with you what our union’s perspectives are:

1. When we talk about social ownership of energy systems we are referring to the fact that ownership of energy resources must be taken out of private hands and be put in the hands of the public through a mix of different forms of collective ownership, such as  energy parastatals [public utilities], cooperatives, municipal-owned entities and other forms of community energy enterprises where full rights for workers are respected and trade union presence is permitted. Energy entities that were privatised must be taken back and put under public ownership and control.

2. When we talk about social ownership of energy systems we are referring to energy being a public or common good that is publicly financed and comprehensively planned. We want to roll back the anarchy of liberalised energy markets.

3. When we talk about social ownership of energy systems we are expressing our determination to resist commodification of electrical power and our desire that energy systems should not be for profit but have as their mandate service provision and meeting of universal needs.

4. When we talk about social ownership of energy systems we are speaking of a system where workers, communities and consumers have control and a real voice in how energy is produced and used. We are calling for constituency-based governing councils IN PLACE of boards of directors in all energy entities. Existing state or publicly owned energy entities that act as private companies and on the basis of a profit motive need to be “socialised.”

5. When we talk about social ownership of energy systems we are calling for the accrual of a large share of economic benefits of energy production and consumption to producers and owners of the actual means through which energy is generated, transmitted and distributed.

As a way of concluding, let me raise a few points in relation to the framing document produced for this roundtable.