In many of the countries where millions are starving, multinationals and foreign governments have taken over prime land for export crops, squeezing out small farmers 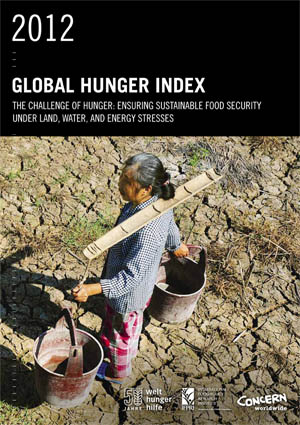 Countries where people lack adequate access to land rights, water and energy — are among the worst performers in the annual Global Hunger Index (GHI).

“We find there is a definite correlation between these resources and food insecurity,” said Claudia Ringler, a co-author of this year’s GHI study, which was produced jointly by the International Food Policy Research Institute (IFPRI) and the NGOs Concern Worldwide and Welthungerhilfe.

Food security is inextricably linked to developments in the water, energy, and land sectors, as many experts have begun to show. “We are not saying anything people don’t know already, but drawing their attention to it again through this study,” said Ringler.

The study underscores the role of land grabs — the practice of leasing out land to international companies, often to grow export crops to produce biofuel — in food security.

“Rising energy prices affect farmers’ costs for fuel and fertilizer, increase demand for biofuel crops relative to food crops, and raise the price of water use,” says the GHI report.

Researchers found that the bulk of the deals to lease out land had been struck in 32 of the countries ranked “alarming” or “serious” on the GHI score. In these countries, most of the population depends on agriculture, yet people seldom have legal rights to their land.

The Ethiopian government has been dismissive of criticism of its large scale land-leasing policy – part of a five year Growth and Transformation Plan – insisting the millions of dollars of foreign investment involved would create jobs, improve domestic agricultural expertise and reduce both poverty and the country’s chronic food insecurity.

Tekalign Mamo, advisor to the Minister of Agriculture in Ethiopia said the land-leasing was part of a two-track approach: offer vacant arable land to agro-pastoralists who wanted to settle; and “since there is so much land available in this country, we then also offer land to anyone who wants to invest even to companies based within Ethiopia.”

He said the money earned from such leases is paid directly into the respective regional government’s coffers to invest in food security initiatives. Tekalign said the authorities had learnt of companies who had entered into leases and had not made the required investment into the leased-land and are taking steps against them. “We are monitoring these things more closely now.”

Through case studies in Sierra Leone and Tanzania, the report demonstrates the damage such deals do for food security, especially that of small farmers. Helping farmers secure land titles could turn this precarious situation around.

In Sierra Leone, about 20 percent of the available agricultural land has been acquired by foreign enterprises, says the GHI. Investors there grow oil palm, sugarcane, and food crops such as rice – most of it for export.

Welthungerhilfe, working in Pujehun District, in Sierra Leone’s Southern Province, looked at one such deal where land covering 24 villages was leased out to Socfin Agricultural Company Sierra Leone Ltd, a subsidiary of the Luxemburg-based Socfin company, to grow oil and rubber for export.

Despite opposition from local farmers, the deal was struck for 50 years, with the option of extending for another two decades. The farmers received a one-time payment of US$220 for every acre lost and were promised education and job opportunities.

But the plantation hires few labourers, and there is no requirement to hire people from the area. Those hired work only on a day-to-day basis. If that was not enough, food prices also rose by 27 percent between May 2011 and May 2012, beyond the reach of much of the local population.

Concern highlighted its experience with Iringa District in the Southern Highlands of Tanzania, a country where only 10 percent of people hold an official title to their land. Working in 12 villages, Concern helped 6,000 people acquire land titles, opening the way for them to acquire loans and reducing disputes over resources in the drought-prone area.

The study points out that both countries had legislation in place to empower smallholders, but that these policies require political will and local capacity. Political will is also required for countries to investment in food security and to responsibly govern natural resources, Ringler said.

Stakeholders “must all talk to each other — the water specialist to the energy expert, from researcher to practitioner, from farmer to policymaker,” she added.

From the 2012 Global Hunger Index:

“One outcome of the scarcity and degradation of farmland is the growing number of deals giving land-scarce or resource-demanding countries access to farmland in land-abundant countries. …. the majority of international land deals to date have occurred in those countries that experience higher levels of hunger and where the population and national incomes depend heavily on agriculture. …

“Research to date reveals high social and environmental risks of such investments, while the promised benefits often fail to materialize … Both anecdotal and emerging case study evidence has shown that local and national land rights systems in most of these countries remain weak; as a result, local communities that once used some of the land acquired by foreign governments and companies have lost their traditional or customary rights.”