“There is no such thing as ‘responsible upgrading’ or ‘sustainable tar sand production.’ We must stop this crime before it ruins more lives and destroys the climate.”

This essay was commissioned for the second edition of  Tool Kit For A New Canada, which will be published by Canadian Dimension magazine this fall.

The Tool Kit is a collection of short articles by Canadian activists, on the key issues of our times, including  inequality, austerity, crime and punishment, Israel-Palestine, climate change, and pensions.  For more information, email info@canadiandimension.com. 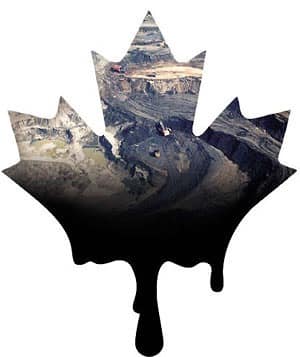 LEAVE THE TAR SAND IN THE GROUND!

The mining of the Alberta Tar Sands has been justly called the biggest environmental crime in history. If it is allowed to continue, it will destroy forests and peat lands covering an area the size of Florida. It will deplete and poison the third largest river system in the world. It will ruin the lives of the First Nations people who depend on those rivers and forests.

The tar sands contain more greenhouse gas than has been emitted by all the oil in all the world in all of history to date. As the noted climatologist James Hansen wrote recently, “If Canada proceeds … it will be game over for the climate.”[1]

Canada is indeed proceeding – at top speed. At the present rate of development, in 2020 the tar sands will be release twice as much greenhouse gas as every car and truck in the country.

Scientists agree that to avoid drastic climate change, we must rapidly phase out fossil fuels and invest in non-polluting energy technologies. Instead the Conservative government, like the Liberals before them, actively promotes increased production of the dirtiest oil on earth. In his drive to make Canada into an “energy super-power,” Stephen Harper is putting the entire world in peril.

Closely related to the tar sands themselves are projects to transport bitumen from Alberta to the U.S. and China, using new or existing pipelines.

As research by historian Sean Kheraj has shown, “the problem of oil pipeline ruptures and spills is endemic to the industry in Alberta.”[2] In 2010 alone, there was an oil or oil and gas pipeline failure in the province every one-and-a-half days.[3]

That’s bad enough when conventional oil is spilled, but the molasses-thick bitumen that comes from the tar sands is far more dangerous to the environment. In addition to being toxic, it is heavier than water, making traditional cleanup procedures ineffective. Two years after an Enbridge pipeline burst in the Kalamazoo River, after a billion-dollar cleanup, untold amounts of poisonous gunk remain at the bottom of the river.

This is the material that the oil industry and Canada’s government wants to pipe through mountains, forests and rivers in northern British Columbia – and then load into tankers that will carry it through narrow channels and along the jagged west coast. If the pipeline is built, the question won’t be if a disaster will happen, but when.

Leave the tar in the sand

Some in the labour movement oppose pipelines, not to protect the environment but to ensure that bitumen is processed in Canada. The NDP, for example, calls for “value-added, responsible upgrading, refining and petrochemical manufacturing here in Canada to maximize the economic benefits and jobs for Canadians.”[4]

Similarly, the Alberta Federation of Labour says Canada should “move up the value ladder with our oilsands resources, rather than sell our resources south of the border in their raw form.”[5]

In a world where greenhouse gas emissions are already far too high, “responsible upgrading, refining and petrochemical manufacturing” is a contradiction in terms. Rather than adding climate-killing jobs in Canada, we must phase out fossil fuels and expand renewable energy.

For the tar sands and its associated pipelines, what’s necessary is to shut down operations: Leave the tar sand in the ground.

While we will certainly march alongside people who propose lesser measures, ecosocialists and environmental justice activists support such goals as:

As the tar sands are shut down, the workers should be offered jobs at the same pay, building green energy sources, retrofitting homes and offices for energy efficiency, and expanding public transport.

We can learn from the example of the British trade unionists’ campaign for One Million Climate Jobs. It takes the concept of a “just transition” into new territory – not just protecting current income, but actually fighting for a labour-initiated transition to a new kind of economy.[6]

First Nations in the vanguard

Tar sands mining and the associate pipeline plans pose a particular danger to First Nation peoples living near tar sands projects. Their cultural heritage, land, ecosystems and health are being sacrificed for oil money in a slow industrial genocide.

So it is important that First Nations have taken the lead in opposing tar sands and pipeline development. As Clayton Thomas Muller of the Indigenous Environmental Network writes:

“The link between unsustainable energy consumption in the Americas and the destruction and desecration of Indigenous homelands and culture is undeniable. As Indigenous peoples, we reject the proposition that our traditional lands should be sacrificed at the altar of irresponsible energy policies.”[7]

The fight against the tar sands and the fight for indigenous rights are inseparable. To build a broad movement against tar sand exploitation, we must begin by recognizing of the leadership role of indigenous people, and unconditionally supporting the rights of First Nations to control resource development and industrial projects within their lands and territories.

Stopping the tar sands won’t be easy. The world’s richest corporations are against us, and our governments operate on the belief that what’s good for oil companies is good for Canada and the world.

But that only makes it more important to bring together First Nations, environmentalists, labour and everyone else who cares about humanity and our planet, in a united movement to stop this crime.

In the words of David Keith, until recently Canada Research Chair in Energy and the Environment at the University of Calgary, “We can’t keep taking carbon out of the ground and putting it in the atmosphere if we want to leave our children with a stable climate. This means there is no such thing as sustainable production of this resource. In the long run it must be shut down.”[8]