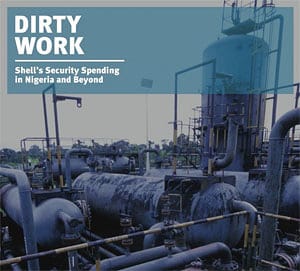 Shell spent at least $383 million on “security” in Nigeria between 2007 and 2009, according to company data leaked to oil watchdog Platform by an ex-Shell manager.

The briefing reveals the extent of Shell’s financial support for Nigerian government forces and other armed groups during a period of intense conflict in the Delta. It follows Platform’s 2011 report, Counting the Cost, which showed how Shell’s reliance on government forces in Nigeria and its routine payments to armed militant groups had exacerbated specific cases of human rights abuse.

The new briefing confirms the vast scale of Shell’s security expenditure and its devastating consequences.

Platform’s briefing raises major questions about Shell’s security policies and procedures. It recommends that Shell publish the details of any payments it makes to the Nigerian government, police and armed forces. Shell should stop making payments to government forces, local contractors and community groups where there is a signaficant risk that those payments will fuel human rights abuses. It should also avoid using private military and security contractors who are known to exacerbate conflict.

Similar recommendations apply to other companies operating in Nigeria such as Chevron, Eni/Agip, ExxonMobil and their contractors.

”Apart from its enormous size, what is striking about Shell’s security spending is how little security it actually created. Shell paid many millions of dollars to government forces with a track record for corruption and creating instability across Nigeria. Shell appear to have spent even larger sums on pacifying militant groups, a practice that has worsened the violence. While primary responsibility for human rights abuses lies with the Nigerian government and other perpetrators, Shell bears a heavy responsibility for the devastating social impacts of its security spending.[4]

“Shell’s security spending in Nigeria is a colossal failure of due diligence. Instead of spending vast sums on harmful security practices, Shell should address the root causes of the conflict by cleaning up decades of oil spills, ending gas flaring, adequately compensating the victims of human rights abuses and insisting that government forces and other perpetrators are held accountable for violations.”

“Soldiers, militants and mercenaries have all benefited from Shell’s spending, whilst impoverished local residents have been routinely killed, tortured or displaced. Shell bears a significant responsibility for its active contribution to human rights violations and must stop its routine security payments. It must also overhaul its contracting and community engagement procedures and clean up its mess in Nigeria.”

In an interview with the Guardian, Celestine Nkabari at the Niger delta campaign group Social Action said:

“This proves what we in the Niger delta have known for years – that the air force, the army, the police, they are paid for with Shell money and they are all at the disposal of the company for it to use it any how it likes . “

Shell is currently trying to persuade the US Supreme Court not to hold corporations accountable for human rights violations overseas, (see Too Big to Punish). The Kiobel v Shell lawsuit accuses the company of aiding and abetting crimes against humanity and other human rights abuses committed by Nigerian military troops against the Ogoni people of the Niger Delta during the 1990s. For more recent cases of corporate complicity in human rights abuse in the Niger Delta, see Platform’s Counting the Cost report (2011).