Eugene V. Debs: “It is not because these tactics involve the use of force that I am opposed to them, but because they do not….” 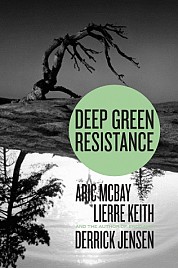 In its March-April issue, Canadian Dimension magazine featured a very positive review of Deep Green Resistance. The reviewer said it “made me a better strategist,” and endorsed author Derrick Jenson’s assertion that “this book is about winning.”

In my view, the strategy and tactics advocated in this book are a path to certain defeat, so I submitted the following brief response, which CD editor Cy Gonick has kindly published in the May-June issue, available on newsstands now.

There is much to admire in Deep Green Resistance (DGR). The authors sincerely love the natural world. They write passionately about environmental destruction and the refusal of the powers that be to change course. Their criticism of the ineffectiveness of mainstream environmental organizations is powerful and convincing, as is their argument that radical greens must aim to “deprive the rich of their ability to steal from the poor and the powerful of their ability to destroy the planet.”

But the book is mostly about strategy and tactics, and that is where it fails.

“The vast majority of the population will do nothing unless they are led, cajoled, or forced. … there will be no mass movement, not in time to save this planet, our home.”

“Humans aren’t going to do anything in time …[so] those of us who care about the future of the planet have to dismantle the industrial energy infrastructure as rapidly as possible.”

That elitist analysis leads to elitist strategy. Having written off most of humanity to as irredeemably apathetic or hostile to change, the enlightened ones of DGR propose to force change on the world through “Decisive Ecological Warfare” conducted by small groups.

If even partially successful, the social and economic chaos caused by such a campaign would be felt most severely by the poor and oppressed. DGR’s authors face that prospect with appalling equanimity:

“We’ll all have to deal with the social consequences as best we can. Besides, rapid collapse is ultimately good for humans — even if there is a die-off — because at least some people survive.”

Of course, Decisive Ecological Warfare is pure fantasy, a video-game vision of a heroic band saving the earth from evil-doers, enabling a handful of survivors to carry on as hunter-gatherers in a new Eden.

Missing from DGR’s scenarios is the outcome that history says is most likely – long before the underground groups achieve any significant size or ability to act, they are infiltrated by police spies and provocateurs and disrupted by arrests. Key activists are imprisoned for years; many more are isolated and demoralized.

Our rulers couldn’t ask for a more favourable result.

“We are,” DGR’s authors admit, “up against a system of vast power, global in scale, with no sympathetic population upon which to draw for either combatants or support.”

But instead of working to build an effective counter-power by educating and organizing the oppressed, they have somehow convinced themselves that the “system of vast power” is actually so vulnerable that it can be brought down by sabotage.

The socialist reply to such illusions was expressed a century ago by the great U.S. socialist leader Eugene V. Debs.

“It is not because these tactics involve the use of force that I am opposed to them, but because they do not…. The force that implies power is utterly lacking, and it can never be developed by such tactics.”

“The uncomfortable truth of the matter is that if there is no future for a radical mass movement in our time, there can be no future for humanity itself.”