by Fred Magdoff. If population growth is causing the environmental crisis, here’s a simple 3-step solution that would actually work …

There are significant numbers of people in the wealthy countries who believe that the great issues of resource depletion and global environmental pollution are caused primarily by the huge number of people on the globe — currently about 7 billion — and that things will only get much worse with the anticipated increase to about 9 billion by mid-century and 10 billion by the end of the 21st century.

Their suggested solution (although some say there really isn’t any — we are all doomed to chaos and barbarism) is to rapidly decrease the world’s population, mainly through a program to induce people to lower the number of children that they have.

They are behind the contraceptive programs in poor countries, funded by NGOs from the wealthy countries, making contraceptives and other family planning tools available to women.

I will save for a later date an analysis of these issues and the approaches that people are suggesting.  For our purposes in this piece I will assume that what they claim regarding the large global population’s deleterious effects on resource use and global environmental damage is absolutely correct.  Okay? 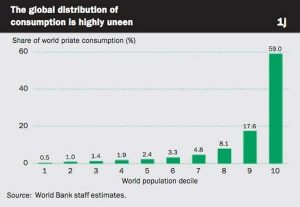 The report also estimates that the poorest 40% of the population use less than 5% of the world’s resources. (World Bank 2008 World Development Indicators PDF)

Now let’s forget ideology for a minute. If you are very concerned about the issue of global resource use and environmental degradation, as I and so many others are, these numbers lead to an absolutely inescapable conclusion: Trying to reduce the population of poor people will not help deal with this at all.  It is the wealthy of the world that are overwhelmingly responsible for the resource/environmental problems we face.

Given this reality, here is my Modest Proposal.

The world ecosystem and its people desperately need a reduction in the consumption by the richest 10%.  I therefore propose the following program for immediate implementation:

Following these prescriptions, we can rapidly reduce approximately half of all resource use and pollution in the world.  The previously wealthy would then either disappear (as they die out) or live a life in which they consume at the rate of the average person in the world.

Now that we have some breathing room, let’s get to work on the remaining issues to create a livable and socially just planet.

Fred Magdoff is professor emeritus of plant and soil science at the University of Vermont and adjunct professor of crop and soil science at Cornell University.  He is co-author, with John Bellamy Foster, of What Every Environmentalist Needs to Know About Capitalism: A Citizen’s Guide to Capitalism and the Environment. This article was first published in MRzine; it is posted here with the Fred Magdoff’s permission.