Book Review: Pierre-Louis hasn’t just done her research, she has organized and presented it very well, making a convincing case that green shopping cannot save the planet: that alone makes it a valuable resource for green activists. Pierre-Louis’s critique of green consumerism is powerful and effective, but is the alternative she offers credible?

The radical German poet Hans Magnus Enzenberger once compared mainstream environmentalism to a Sunday sermon that terrifies parishioners with dire warnings of eternal damnation, but concludes weakly by promising salvation to any sinner who performs a simple act of penance.

“The horror of the predicted catastrophe,” he wrote, “contrasts sharply with the mildness of the admonition with which we are allowed to escape.”

Innumerable green books fit that description. Again and again, intense warnings of imminent disaster are followed by lists of Easy Things You Can Do to Save the Earth. Buy fluorescent light bulbs. Turn down the thermostat and buy a warm sweater. Ride a bicycle to work. Carry groceries in reusable tote bags. Don’t buy bottled water.

Kendra Pierre-Louis is an editor of Justmeans.com, a website that calls itself “the world’s leading source of information and connections for the sustainable business industry,” so we might expect her to favor such proposals, but that’s not the case. Her new book Green Washed is a powerful critique of “the comforting message that we can shop ourselves out of our current environmental mess.”

“Too many businesses and environmental groups have led us to believe that if we buy the correct collection of products, we can save the planet. While these assurances have done much to assuage our collective guilt, and even more to create a generation of smug eco-shoppers, it has done next to nothing to fundamentally change the environmental landscape, while in many cases actively contributing to environmental degradation and misinformation.”

But while it rejects the Easy Things You Can Do approach, Green Washed still suffers from the Sunday sermon problem. Pierre-Louis’s critique of green consumerism is powerful and effective, but the alternative she offers is no more credible than a green shopping list.­

In six chapters on consumer products and three on energy alternatives, Pierre-Louis documents the environmental damage caused by supposedly green products. Organic food is often grown by malnourished farm workers. Biodiesel comes from tree farms that accelerate biodiversity loss. It takes a whopping 400 gallons of water to produce the fabric for one natural cotton T-shirt. Even if your hybrid car used no gasoline at all, it would still require roads.

“The construction of one single mile, of one single lane, of a highway’s smooth, perfectly paved road surface consumes between 7,000 and, 12,000 tons of raw materials—the same amount used by 600 to 1,000 US households annually. In the process, that same tiny mile emits some 500 to 1,200 tons of carbon dioxide.”

Green Washed’s greatest strength is its clear and concise presentation of such data. Pierre-Louis hasn’t just done her research, she has organized and presented it very well, making a convincing case that green shopping cannot save the planet: that alone makes it a valuable resource for green activists.

In her view, what’s necessary is not just different consumption, but less consumption. “The easiest thing to do, the greenest thing, is to simply use less of whatever we are using.” Innumerable products shouldn’t be made at all; others should be made to last. If we stop wasting 40% of all food that’s grown, agriculture will use less land and water. Reliable and cost-effective public transit will reduce the need for cars, fuel and highways. Making clothing that lasts will keep millions of tons of textile waste out of municipal landfills.

In refreshing contrast to most books on consumerism, Green Washed pins the blame for excess consumption on our economic system, not on individual psychology.

“If we were to make reducing our consumption to a level that was both materially satisfying and ecologically sustainable our central focus, our entire global economic system would collapse. This isn’t a hyperbole. Our economic system is based on the need for perpetual growth; we either grow our economy or it dies, taking us along with it.”

Unfortunately, Pierre-Louis’s analysis of causes stops with criticism of growth. She doesn’t ask why the global economic system is so irrational. Why is the only alternative to one polluting product so often another that pollutes as badly or worse? Many brilliant writers have criticized growth, and offered detailed proposals for steady-state economies – why have they been ignored by those in power? What about our existing social and economic order makes growth so essential and environmental destruction so universal?

“It’s about going to your neighborhood bars and getting them to band together to refuse to stock any beer sold by a publicly traded company, or getting your local bakeries to start using sustainably sourced flour, or getting people in your communities to stop frequenting the Wal-Marts and big box retailers and to work together to localize the economy.”

Buying local may be good in its own right, but it’s impossible to take seriously her claim that such actions amount to “dropping out of the normal economic system.” Even less believable is her view that local shopping will form the basis of a “shadow, or parallel economy” that will “tread lightly on the earth” and “cast a light into the dark corners of the normal economy.” 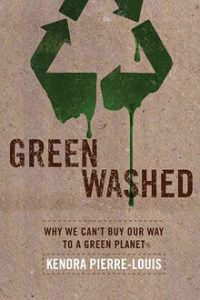 The handful of real world examples she cites are cooperatives, a type of economic institution that has co-existed with destructive capitalism in various forms for at least two centuries. As many past experiences have shown, the “normal economy” can easily tolerate such alternatives, so long as they don’t significantly challenge its constant drive for new sources of raw materials, cheap labor and profit. In rare cases when an alternative does grow beyond acceptable limits, the powers that be have more than enough power to absorb or crush it.

Pierre-Louis admits that “the people currently in power … have a vested interest in keeping things more or less the same,” but she offers no guidance for how we are to deal with their resistance to change.

Projects that improve the sustainability and resilience of local communities are important, but they are no substitute for political and social action against the global forces that are destroying our world. Unless we stop and reverse those forces, Pierre-Louis’s shadow economies will be small green islands in an ocean of environmental destruction – and water levels will continue rising.

Ian Angus is editor of Climate and Capitalism, and co-author of Too Many People? Population, Immigration, and the Environmental Crisis (Haymarket Books, 2011)