The Occupy movement considers the UNFCCC to be ‘United Nations Fools, Clowns and Carbon Criminals’ and it’s hard to argue against that based on 16 past performances.

Patrick Bond is Senior Professor of Development Studies and Director of the Centre for Civil Society at the University of KwaZulu-Natal. His latest book is “Politics of Climate Justice: Paralysis Above, Movement Below.” 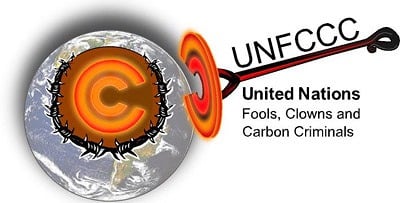 However, let’s be frank: in many cases the courageous push by the 99% against these 1% personalities only dislodged the venal creatures, not the system, so replacements crawled right back in.

Egyptian generals are just as vicious, as illustrated at Tahrir Square last week, and many Libyan ‘rebels’ are racist thugs worthy of CIA support. The new IMF managing director, French conservative Christine Lagarde, is being investigated by the Court of Justice of the Republic for abuse of authority as finance minister when she gave a $580 million payout to an Adidas shoes tycoon close to the ruling party. Greek’s new ruler, Loukas Papademos, was formerly vice-president of the European Central Bank, the institution that joins the IMF as tormentors of poor and working-class Europeans. In Italy the same job was given to Mario Monti, a former EU Commissioner with a brutal banker mentality.

On the other hand, Arab Spring political democrats and Occupy economic democrats won’t let up the pressure. I visited Occupy Dublin’s Dame Street next to the Irish central bank late last month; and Occupy Washington two weeks ago; and the next day, Occupy Wall Street at Zuccotti Park in Manhattan’s financial district, just prior to the New York police force’s illegal eviction of non-violent tent-residents.

In each case, the spirit reminded me of anti-apartheid movement determination, heart-felt principles and strategic clarity: no half-baked reforms like tricameral parliaments to polish apartheid’s chains will satisfy the Occupiers, who are demanding fundamental system change, and who enjoy huge popular support.

Surprisingly perhaps, the argument to extend Occupy to Durban is advanced by a former manager of the Davos World Economic Forum and president of Costa Rica, José María Figueres, who is the brother of Christiana, the executive secretary of the UN Framework Convention on Climate Change. He was asked by OneWorld tv last week at the Climate Vulnerable Forum in Bangladesh, “You’ve expressed your sympathies with the Occupy Wall Street Movement and called for an Occupy Durban. What would that look like and what could it achieve?”

Figueres replied,“The riots of London, and the indignados of Madrid and the now growing global Occupy Wall Street movement is a sign of the frustration felt by many given that we are not addressing their economic needs. So with respect to climate maybe we need an Occupy Durban.”

And outside Durban’s International Convention Centre, in the broader society, is there a potential for a Climate Spring like the Arab Spring? “The history of humanity shows us that it has always been a big crisis that has made us move,” he responded.

That crisis is surely upon us, with more than 300,000 people dying annually because of climate change, according to demographers. Might the UNFCCC live up to global-governance potential – last realised in the 1987 Montreal Protocol that banned CFCs to save the ozone hole – or instead will Durban be known as the Conference of Polluters, the place the Kyoto Protocol’s mechanism for binding emissions-cut commitments died, while carbon trading remained the vehicle the 1% chooses for its climate gambling?

Even though Zurich’s UBS bank last week predicted a total collapse of the European Union’s Emissions Trading Scheme in coming months, it looks like we will suffer the latter when COP17 closes on December 9.

So in order to save the planet and people, the 99% should challenge the UNFCCC’s for-profit mentality. An interesting email hit my inbox on November 10:

“The Occupy movement that is sweeping the globe shines a light on the unjust systems which benefit a small group of elite individuals and corporations, consolidating wealth and power for the few to the extreme detriment to the majority of the world’s inhabitants and the planet as a whole.”

The COP17 will, according to the email, “do nothing to address this imbalance of power and resources and instead would give those same people and institutions who have caused economic ruin control of our land, water and atmosphere to trade as nothing more than money-making commodities.”

One response, wrote the anonymous emailer, is to Occupy COP17, and a website, Facebook page, and Twitter feed (#occupycop17) are already operational. The Occupy movement considers the UNFCCC to be “United Nations Fools, Clowns and Carbon Criminals” and it’s hard to argue against that based on 16 past performances.

There are many South Africans with genuine grievances who will be part of the anti-COP17 protest scene, in part because of Eskom’s mismanagement of energy (more coal-fired power plants as Greenpeace dramatised by blocking Eskom construction at Kusile last week) and electricity (high-priced for the masses, low-priced for Anglo American and BHP Billiton).

Others will show up just to make a fuss: Business Day last week headlined on the front page, “Malema supporters to ‘disrupt climate conference’” in the wake of the thrashing the African National Congress disciplinary committee gave the Youth League leadership.

For those more serous about climate justice, some of the most interesting reflections of 99% thinking and practical alternatives will be at the People’s Space, which was recently moved to the University of KwaZulu-Natal’s Howard College campus, starting with the Conference of the Youth (no relation to Juju) on 25-27 November, and then open to the public from 28 November until 9 December. A nightly teach-in from 7:30pm at our Centre for Civil Society adds academic rigour to activist passions. Delegates include hundreds from the Pan African Climate Justice Alliance and the Rural Women’s Assembly

All it takes to join People’s Space, Occupy Durban and the Global Day of Action march on December 3 is a healthy degree of skepticism for what the 1% are cooking up inside the UNFCCC’s smoke-filled ICC rooms, and a genuine respect for the People’s Power that again and again rises in the least expected places.