The crisis in the world food system has its origin in the expansion of corporate capitalism, which has led to the eviction of millions of peasant families and is transforming the very way in which countries farm. 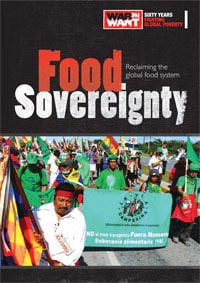 The following is the Executive Summary of Food Sovereignty: Reclaiming the Global Food System, published in October 2011 by War on Want, a UK-based group that was founded in 1952 to fight poverty in developing countries in partnership with people affected by globalisation.

The full report can be downloaded here. [PDF]

In 2009, for the first time in human history, over a billion people were officially classified as living in hunger. As the UN’s Food and Agriculture Organisation (FAO) confirmed, this record total was not a consequence of poor harvests or natural disasters. Hunger on this scale is the result of a global economy in which hundreds of millions of small farmers, fisherfolk, pastoralists and indigenous people have faced ruin through the hijacking of the food system by large agribusiness and food retailers.

The crisis in the world food system has its origin in the expansion of corporate capitalism. This expansion has not only led to the eviction of millions of peasant families from their land, but is also transforming the very way in which countries farm. Many national systems have been converted to export-oriented agriculture, at the same time as the countries have been forced to open their own markets to food imports, including imports dumped on them by US and EU companies at less than the cost of production. As a result, millions of small farmers have seen their livelihoods destroyed.

The main vehicle for achieving the transformation of agriculture in the global South was the Green Revolution, which brought huge profits to the multinational corporations involved. Yet levels of hunger actually rose during the Green Revolution, despite increased production. Per capita food production increased by 8% in South America and 9% in South Asia between 1970 and 1990, but the number of hungry people rose by 19% and 9% respectively in those regions, both key targets of the new technologies. The same story was replayed in countries across the world.

The root cause of the global food crisis is to be found in a system designed to sustain corporate profits rather than meeting people’s needs. Yet there is a positive alternative: the model of food sovereignty – “the right of peoples to healthy and culturally appropriate food produced through ecologically sound and sustainable methods, and their right to define their own food and agriculture systems”.

Food sovereignty requires agrarian reform in favour of small producers and the landless; the reorganisation of global food trade to prioritise local markets and self-sufficiency; much greater controls over corporations in the global food chain; and the democratisation of international financial institutions. It is a vision of a world in which the decisions on how food is cultivated, processed and traded are reclaimed from capital and handed back to the people.

The dominant framework through which the international community has chosen to address the scandal of global hunger is that of ‘food security’. This is a woefully inadequate response to the iniquities of the present food system, relegating the issue of hunger to a social welfare problem that can be resolved by simply handing out more food. It fails to recognise that hunger is essentially a political problem that must be resolved by changes in the balance of power. The food security approach is ultimately a defence of the status quo.

The UK’s Department for International Development (DFID) has long championed a model of food security that is based on free trade, corporate-owned technology and greater private sector control of food production and distribution. DFID’s 2009 White Paper sought to take those policies further by means of a new partnership with the Alliance for a Green Revolution in Africa, which would deepen farmers’ reliance on seed and agrochemicals controlled by a few powerful corporations. The UK government was also a central player in the G8 leaders’ response to the crisis of escalating food prices in 2008, which called for removal of export restrictions and strengthening of the role of free markets in the food system, despite the acknowledged damage this would cause.

In pursuit of the positive alternative of food sovereignty, peasant farmers across the world are developing their own forms of sustainable farming, or agroecology. These can be significantly more productive than industrial agriculture – as well as offering a ready solution to the mounting disaster of greenhouse gas emissions caused by intensive farming. In Brazil, Sri Lanka and Mozambique – as this report documents – War on Want partners are helping communities realise the principles of food sovereignty in their own food production so as to reclaim control over their livelihoods.

Yet food sovereignty involves far more than producing food. It entails a radical change in the way society is organised so that power is taken away from local elites, who are so often aligned with corporate capital, and restored to the people. It means peasant communities gaining control over their land and deciding what they will grow and how they will grow it. It means pushing through changes in macroeconomic policy so that national food production can be protected from competition from cheap food imported from abroad. In this way, food sovereignty is an integral part of the process of constructing participatory democracy, and of demonstrating that another world is possible.