The debate following our article in Grist reveals that many greens have a blindspot about class. Blaming the world’s problems on too many people makes little sense when one-half of one percent of the world’s population owns nearly 40% of all wealth and controls most of the rest

This week, the environmental website site Grist published an article by Simon Butler and me, Is the environmental crisis caused by the 7 billion or the 1%? This was a departure for Grist, which frequently carries articles warning of an impending overpopulation apocalypse. Kudos to editor Lysa Hymas for commissioning and publishing an article I’m sure she doesn’t agree with, in order to promote discussion of this important issue.

The article was posted on Wednesday, Oct. 26, and by Friday 820 people had “liked” it on Facebook, making it one of the three most liked articles in Grist‘s Population section this year. [Update, Nov. 1:  Now over 1,000 likes.]

But judging by the comments it received, some readers are less than keen about any discussion that focuses on issues of class, power, and inequality. One wrote:

“What a piece of leftist drivel.  I don’t need to say this because most of the other commentors already have, but this crap is another low point for Grist.”

The most frequent criticism from Grist commenters accuses us of failing to understand that consumer desires drive the economy, that corporations are just responding to our demands, expressed through the market. The system isn’t at fault, “we” are.

“Billionaires aren’t mining and pillaging for their own enjoyment – almost all of us in developed nations use those resources every day.”

“The 1% may own the companies and wealth, but that wealth comes from selling us all stuff, and it is hypocritical to say that all of us have not invested something in the global economic system. ”

“But BP could not have polluted the Gulf Coast if there was no demand for petroleum. The demands of those 7 billion are driving corporations to fulfill the demands of all the humans inhabiting this planet. After all, if we were at say 3 billion now BP would not have had to drill in the Gulf in the first place.”

I responded to these comments with a brief summary of arguments that Simon and I make in Chapter 12 of Too Many People?

That view, known to academic economists as “consumer sovereignty,” suffers from at least four fatal weaknesses.

“First, it ignores the immense market power of the wealthiest consumers. In the U.S., the richest one percent have greater wealth than the bottom 90 percent combined. The poorest 50% collectively own just 2.5% of all U.S. wealth. Analysts at Citibank have used the term ‘plutonomy” to describe the economies of the U.S., Canada, U.K., Australia, and others, which are dominated “rich consumers, few in number, but disproportionate in the gigantic slice of income and consumption they take.”

“Second, it ignores the fact that markets aren’t just unbalanced in favor of rich buyers, they are consciously manipulated by rich sellers. The 1% aren’t just richer, they have the power to engage in what John Kenneth Galbraith called “management of demand” – far from just responding to consumer demand, corporations actively create demand for the products they find most profitable to sell.

“Third, it ignores the fact the range of choices available to buyers is determined not by what is environmentally friendly, but by what can be sold profitably. As a result, we get microchoices such as Ford vs Hyundai — but not real choices such as automobiles vs reliable and affordable public transit.

“Fourth, it ignores the fact that buyers have little or no influence over how products are made or produced. BPs decision to ignore safe drilling practices in the Gulf, Shell’s decision to dump oil in the Niger –those decisions were made not by consumers but by corporate executives, to maximize the profits demanded by their shareholders. And remember – 1% of the population owns a majority of stocks.

The underlying problem with the discussion, I think, is that many Grist readers – certainly the ones that are unhappy with what we wrote – are blind to class. They know that the 1% do more environmental damage than the rest of us, but view it as just a matter of degree, not as a fundamental class divide.

In fact, to echo F. Scott Fitzgerald,  the very rich are different from you and me. As we wrote in Too Many People? they don’t just have more money:

“At some point near the top of the income ladder, quantitative increases in income lead to qualitative changes in social power, exercised not through consumption but through ownership and control of profit-making institutions.”

The Grist commenter who wrote that we all damage the environment, “the rich are just more destructive,” seems to be unaware of just how vast a gap there is between the very wealthy and the rest of us.

This Credit Suisse graphic gives some idea of how unequally global wealth is distributed. (Click for larger image) 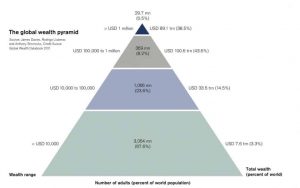 He could have added that most of the wealth held by the bottom 90% consists of family homes, while richest 1% own most corporate shares. The rich aren’t just richer — they own wealth that gives them control of our economic system, and they profit from environmental destruction.

Reducing human numbers might, over many decades, make a small difference to the global environment. Eliminating the wealth and power of the 1% is the only way to completely turn things around.

More on this subject