by Maryam Adrangi and Cameron Fenton 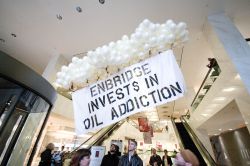 TORONTO – As Enbridge holds its investors meeting in Toronto’s financial district, Environmental Justice Toronto sent them a message about their dirty investments in fossil fuels. Grassroots organizers sent up a banner attached to helium balloons that read “Enbridge Invests in Oil Addiction.” The banner was visible through the glass front of the building, outside of which activists held up another banner that read “Community Resistance is the Cure.”

“When it comes to the tar sands, Enbridge is Canada’s pusher, pumping dirty oil through unreliable pipelines which are bound to spill,” said Taylor Flook, an organizer with Environmental Justice Toronto. “Averaging at 61 leaks per year for the past 10 years, Enbridge is celebrating over 600 leaks and breaks—and its investors need to know that. Enbridge pipelines are too risky.”

Enbridge is asking investors to support the expansion of tar sands oil pipelines across North America. Recent accidents and breaks, including one of the largest spills in US history when a pipeline leaked into the Kalamazoo River in Michigan this July, are showing that it is not a matter of “if” there is a spill, but “when” there is a spill.

Enbridge wants to expand its pipelines to send tar sands oil across the continent through projects like the Northern Gateway Pipeline. The pipeline stretches from the Tar Sands in Northern Alberta to Kitimat, B.C., polluting water and food sources and causing cancers and disease in local communities. The pipeline has been rejected by communities all along its route, including the Carrier Sekani Tribal Council and now the B.C. Union of Municipalities who voted to oppose the project last week.

Resistance to the expansion of the Enbridge and other tar sands pipelines is being lead by many First Nations communities along with climate justice activists. “Tar sands projects are one of the largest environmental injustices on earth and is Canada’s largest source of global warming pollution,” says Flook. “If Canada wants to uphold human rights and be a leader at the international stage, projects such as Enbridge pipelines cannot go through.”

Hundreds of people are mobilizing across Canada to stop the Gateway and other pipeline projects with demonstrations in Vancouver, Whistler, Kitimat, and Sarnia taking place over the past two weeks.