Almost all of the press coverage of protests against the Bush-Harper-Calderon summit in Quebec this week has focused on a tiny group of “rock throwing anarchists.” Here’s the real story … 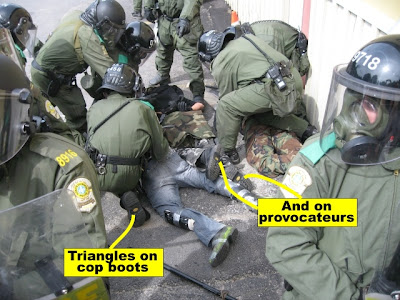 Photo from Canadian Union of Public Employees.
Captions added by Climate and Capitalism

UPDATE, August 24: After initially denying it, the Sûreté du Québec (SQ) has admitted that the three masked men were police officers. The SQ says the cops were there to prevent violence and were not acting as provocateurs, but doesn’t explain why they were carrying rocks when confronted by protest organizers.

Such accusations have been made before after similar demonstrations but this time the alleged “agents provocateurs” have been caught on camera.

A video, posted on YouTube, shows three young men, their faces masked by bandannas, mingling Monday with protesters in front of a line of police in riot gear. At least one of the masked men is holding a rock in his hand.

The three are confronted by protest organizer Dave Coles, president of the Communications, Energy and Paperworkers Union of Canada. Coles makes it clear the masked men are not welcome among his group of protesters, whom he describes as mainly grandparents. He urges them to leave and find their own protest location.

Coles also demands that they put down their rocks. Other protesters begin to chime in that the three are really police agents. Several try to snatch the bandanas from their faces.

Rather than leave, the three actually start edging closer to the police line, where they appear to engage in discussions. They eventually push their way past an officer, whereupon other police shove them to the ground and handcuff them.

Late Tuesday, photographs taken by another protester surfaced, showing the trio lying prone on the ground. The photos show the soles of their boots adorned by yellow triangles. A police officer kneeling beside the men has an identical yellow triangle on the sole of his boot.

Kevin Skerrett, a protester with the group Nowar-Paix, said the photos and video together present powerful evidence that the men were actually undercover police officers.

“I think the circumstantial evidence is very powerful,” he said.

The three do not appear to have been arrested or charged with any offence.

Police confirm that only four protesters were arrested during the summit – two men and two women. All have been charged with obstruction and resisting arrest.

Veteran protester Jaggi Singh, who is helping to circulate the video as widely as possible, said all four of those arrested are known to organizers and are genuine protesters.

“But we see very clearly in that video three (other) men being arrested . . . How do (police) account for these three people being taken in, being arrested? Where did they go?” Singh said.

“I have no hesitation in saying they were police agents . . . and they were caught red-handed.”

Singh, a member of the Montreal-based No One is Illegal, believes the agents were meant to provoke a confrontation and give the police an excuse to use some of their “toys,” such as tear gas and rubber bullets.

“To a certain extent it’s self-fulfilling logic. You provide police with this kind of equipment and they end up using it and one way to justify it is to plant some people that toss a rock or two.”

Neither the RCMP nor the Surete du Quebec would comment on the video or even discuss generally whether they ever use the tactic of employing agents provocateurs.

“I cannot answer your question because I don’t have the information,” said Const. Kane Kramer, a spokesman for the RCMP at the summit.