I came across this wonderful song on the website of the Alliance for Green Socialism. The artist, well-known British folksinger Roy Bailey, has very kindly granted permission to post it on Climate and Capitalism.
“Red and Green” was written by Robb Johnson. Roy Bailey recorded it on his CD “CODA” (Fuse Records CFCD 404) which can be purchased through his website. 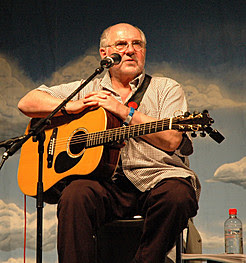 Roy Bailey began his singing career in a skiffle group in 1958. For nearly 50 years he has sung in folk clubs, concerts and festivals the length and breadth of England, Scotland and Wales and from Sydney to Vancouver, from Cape Town to Stockholm.

His career has been hailed as representing “the very soul of folk’s working class ideals… a triumphal homage to the grass roots folk scene as a radical alternative to the mainstream music industry.” (Colin Irwin, MOJO)

He has been described in the GUARDIAN as being the possessor of one of the finest voices in the folk world and has a large, widespread and very loyal following worldwide.

In 2003, Roy together with Tony Benn were awarded ‘Best Live Act’ at the BBC Radio 2 Folk Awards, for their hugely successful programme ‘Writing on the Wall.’

In 2000, Roy received an MBE award from the UK government for “services to folk music.” In 2006 he returned that award, and issued this statement:

As a life-long supporter of the Labour Party I am so appalled at the government’s foreign policy that I have decided to return the MBE I was awarded for “services to folk music.” I can think of no better way, lawfully, to express my horror and opposition to our failure to call for an immediate ceasefire in the Lebanon and to our complicity with the USA’s policy of supporting Israel’s actions in Palestine.Tony Blair’s support for these policies is for me a betrayal of all I took the labour party to stand for. The death and destruction on all sides and the chaos in both Iraq and Afghanistan is the result of such decisions. The parliamentary party and the constituency parties, by remaining supportive of these policies, are discredited as far as I am concerned.

I am not so foolish as to expect any government to be able to deliver all its manifesto promises. I understand and accept that compromises have to be made. However, when it comes to waging an illegal war in Iraq, the killing of innocent people in Afghanistan, Iraq and now, the Lebanon, I can no longer accept as an “Honour” a recommendation supported by the prime minister, that I be awarded the MBE.

I understand many people within the folk music community have applauded such awards as a welcomed recognition folk music makes to our common culture. I trust they will understand my reasons for now rejecting and returning that award.