New Research: 25% of the world’s people will face more heat wave days than all the rest combined 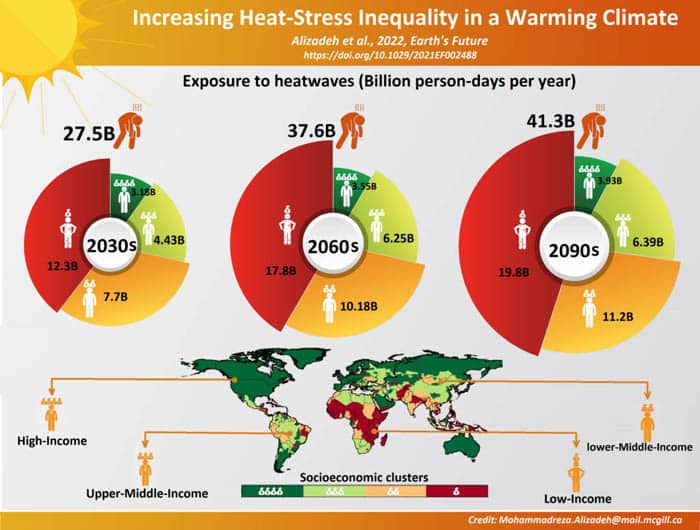 People with lower incomes are exposed to heat waves for longer periods of time compared to higher income people, due to a combination of location and access to heat adaptations like air conditioning. This inequality is expected to rise as temperatures increase, new research shows.

Lower income populations currently face a 40% higher exposure to heat waves than people with higher incomes. By the end of the century, the poorest 25% of the world’s population will be exposed to heat waves at a rate equivalent to the rest of the population combined.

Poorer populations may be hit with a one-two punch of more heat waves from climate change due to their location and an inability to keep up with it as a result of lack of heat adaptations like air conditioning.

The study analyzed historical income data, climate records and heat adaptations to quantify the level of heat wave exposure that people in different income levels face around the world. Exposure to heat waves was measured by the number of people exposed to heat waves times the number of heat wave days. Researchers paired those observations with climate models to predict how exposure will change over the next eight decades.

The study was published in the peer-reviewed journal Earth’s Future, on January 20. The researchers found the lowest-income quarter of the world’s population will face a pronounced increase in exposure to heat waves by 2100, even taking into account access to air conditioning, cool air shelters, safety regulations for outdoor workers and heat safety awareness campaigns. The highest-income quarter, comparatively, will experience little change in exposure as their ability to keep up with climate change is generally greater.

People in the lowest-income population quarter will face 23 more days of heat waves per year than those in the highest income quarters by 2100. Many populous, low-income regions are in the already-warm tropics, and their populations are expected to grow, contributing to the discrepancies in heat wave exposure.

The study adds to a growing body of evidence that populations who have contributed the least to anthropogenic climate change often bear the brunt of climate change impacts, said lead study author Mojtaba Sadegh, a climatologist at Boise State University. Historically, higher-income countries contribute a majority of greenhouse gases. “We expected to see a discrepancy, but seeing one quarter of the world facing as much exposure as the other three quarters combined… that was surprising.”

While higher-income regions often have greater access to adaptations, they will likely face rolling blackouts or brownouts as electricity demand swamps the grid. An increase in geographic area affected by heat waves, which the study found has already increased by 2.5 times since the 1980s, will limit our ability to “borrow” electricity from unaffected neighboring regions, like California importing electricity from the Pacific Northwest, Sadegh said.

“We know from far too much experience that issuing a heat wave forecast is insufficient to ensure that people know what appropriate actions they need to take during a heatwave and to do so,” said Kristie Ebi, a professor in the Center for Health and the Global Environment at the University of Washington who was not involved in the study. Collecting more data on heat wave frequency and responses in low-income countries, she said, is critical.