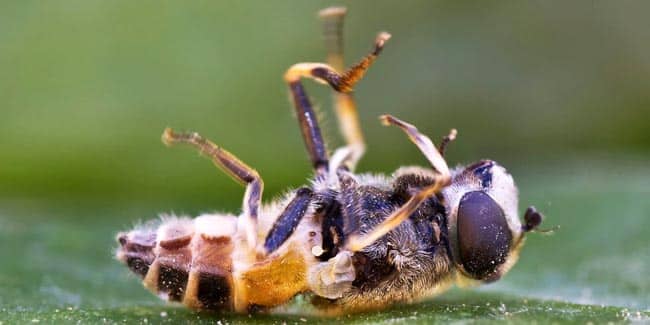 A book with a title referencing Rachel Carson’s seminal Silent Spring is a bold undertaking. But it had to be done. Despite the growth in awareness that Carson provoked, the actual destruction of the environment never stopped. DDT may have been mostly phased out, but now we have neonicotinoid insecticides which are continuing the relentless destruction of insect life and the food web that we all depend on.

It’s a bleak picture, and despite the increase in awareness since the 1960s, Goulson makes it pretty clear that its a vastly under-researched problem. I note that funding for ecological research has not fared well over recent decades, at the precise point when we needed it most. But there is enough data to be very concerned about plummeting insect numbers and probably many species going extinct without our even knowing it. Since insects are a vital foundation of ecosystems, as well as being fascinating, this is concerning on many levels. We rely entirely on healthy ecosystems for our own food, in the end. The first three parts of the book develop this case, in a calm but impassioned way. They summarize why insects are crucial (and very cool), the current state of scientific research, and ethical and policy arguments succinctly and accessibly. All manner of threats to insect survival and diversity are covered, including city light pollution, herbicides, fungicides, invasive species and more.

I particularly enjoyed the coverage of controversial issues like bans on the herbicide Roundup (he explains the debate around this better than anything else I have read). He canvasses (and rightly dismisses) some of the wackier ideas out there (chemtrails) while, rightly or wrongly, suggesting a more precautionary approach to others (5G technology).

More broadly, and partly because of the important role insects play in supporting the biodiversity of everything else, this book is a great description of the broader crisis of biodiversity that the world finds itself in — something maybe more or less frightening than climate change, but acting in concert with it to create a crisis for the foundations of our ecology, economy and culture.

This far, the book is a dire but essential intervention into public debate. Were it to end there, I would give it five stars, and everyone concerned should read this far at least. The remaining two parts of the book highlight what I think are two main limitations – one contextual and surmountable, the other profound and revealing of broader problems with the response to environmental problems.

The concluding sections of the book focus on the technical ways that we can stop destroying insect biodiversity — in our cities, and in agriculture. There are some good discussions of environmental policy (land sparing vs land land sharing, for example) and the way our current systems could be altered. There are many sensible suggestions that I and many others familiar with the problems all broadly agree with, and which taken together, would go a long way to solving the problems.

However, the very UK focused nature of Goulson’s examples and recommendations make it a bit laborious for people elsewhere. We have to extrapolate to which elements apply in our situation and try to work out if they apply directly, or perhaps with alteration.

More problematic, I think, is the slightly parochial sense in which his solutions mostly ignore issues of international trade, debt and development. It’s impossible to solve our biodiversity or climate crises in one country; the legacy of colonialism and third world underdevelopment really needs to be considered more. Which brings me to the bigger problem.

The fundamental problem with book, in relation to its aim of Averting the Insect Apocalypse, is that Goulson completely ignores and sidesteps issues of political power and power structure, at both national and international levels. His remedies for people to pursue range through such radical steps as voting for the parties with the best policy, writing to your politicians, and things like installing “bee hotels” in your backyard garden (assuming you have one).

The problem is, these are the kinds of actions that people who care have been doing since Silent Spring came out, and things have only gotten worse in that time.

Perhaps some of his final recommendations could have been to find like-minded others and form a revolutionary cell, which can then go on to:

I could go on. Of course building a bee hotel in your backyard, or even having a chat with your MP over tea and biscuits, is much easier and no doubt seems more direct. But where is the evidence for these things making an impact on the scale we need? Why have these efforts failed for so long? If the problem was a lack of reasoned argument finding its target, I suspect the problem would have been solved many decades ago.

Goulson isn’t a political theorist, I guess, so I should note that I don’t find the things he does suggest particularly unhelpful in and of themselves. But conservationists need to get beyond liberal thinking that takes the status quo for granted.

Silent Earth is essential reading, but mostly the first three parts. Perhaps readers should go on from this to something like Magdoff and Foster’s What Every Environmentalist Needs to Know about Capitalism (Monthly Review Press, 2011).

Ben Courtice is an ecosocialist activist in Australia.