‘The Red Deal: Indigenous Action to Save Our Earth’ 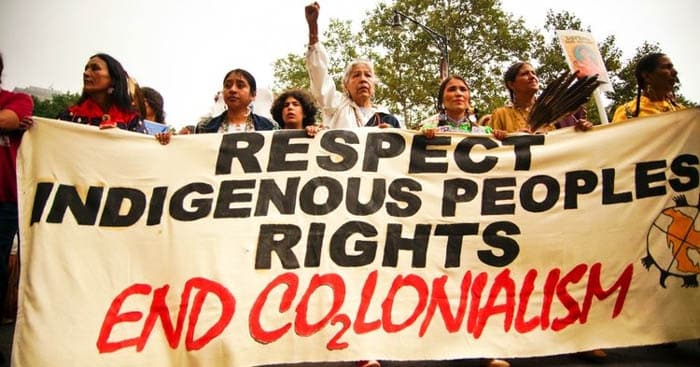 The Red Nation
THE RED DEAL
Indigenous Action to Save Our Earth
Common Notions, 2021

As heat and severe weather records are broken again and again, it should be clear by now that there is no limit for capital. There will be no scientific warning or dire catastrophe that leads to a political breakthrough. No huge wildfire, terrible drought or great flood will make governments and corporations change course. To carry on as they are means extinction. And yet they still carry on: more fossil fuels and fewer trees, more pollution and fewer species. 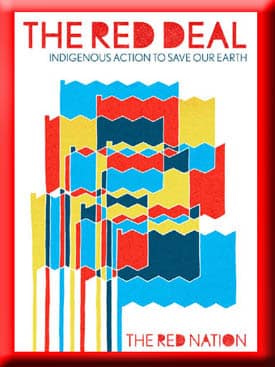 Recognition that there is no way out of this crisis without far-reaching, social upheaval animates the proposals put forward in The Red Deal: Indigenous Action to Save Our Earth. The short book was authored by activists from The Red Nation, a coalition devoted to Indigenous liberation and made up of Native and non-native revolutionaries based mainly in North America.

The authors make clear that they believe the campaign to halt climate change and repair ecological destruction is bound up with the fate of the world’s Indigenous peoples. They say bluntly that “there is no hope for restoring the planet’s fragile and dying ecosystems without Indigenous liberation” and that “it’s decolonization or extinction.”

This is not just a rhetorical flourish. The Red Deal points out that the approximately 370 million Indigenous people worldwide belong to traditional lands that cover 22-25% of the world’s surface. These territories overlap with areas that hold more than 80% of the planet’s biodiversity. Regaining control over their traditional lands is essential for Indigenous people’s ability to protect, restore and care for them, as they did sustainably for millennia prior to their dispossession. This makes decolonization – which “starts with land back” to Indigenous peoples – a critical part of The Red Nation’s proposals to avoid planetary extinction.

The authors of The Red Deal emphasize that their vision of decolonization “isn’t exclusively about the Indigenous” but is instead meant to bring together non-Indigenous and Indigenous activists in a common fight for the future.

They say: “What we seek is a world premised on Indigenous values of interspecies responsibility and balance. We seek to uplift knowledges, technologies, governance structures, and economic strategies that will make these values possible, in the immediate future and in the long term, and which always have the future health of the land at the center of their design and implementation, Indigenous or not. In this sense, decolonization is for, and benefits, everyone. It also needs our collective cooperation to succeed.”

Some recent Indigenous-led movements against ecologically destructive projects have won international support and attention, such as the Oceti Sakowin-led protests to halt the Dakota Access Pipeline at Standing Rock and the Wangan and Jagalingou people’s campaign to stop the huge Adani coalmine in Queensland’s Galilee Basin. But rather than focusing solely on what Indigenous movements oppose, The Red Deal aims to draw attention to “the revolutionary potency of what Indigenous resistance stands for: caretaking and creating just relations between human and other-than-human worlds on a planet thoroughly devastated by capitalism.”

The authors of The Red Deal advance a “plan of collective climate action” based on four general principles. The first of these is What Creates Crisis Cannot Solve It. This principle means that the destructive, polluting industries that profit from the plunder of nature cannot be reformed and have no future. But The Red Deal extends this principle to carceral institutions such as the military, police and prison systems, calling for their abolition. The Red Deal insists such violent, repressive institutions also stand in the way of a safe climate future.

The second principle is Change from Below and From the Left. This is both a commitment to practice grassroots democracy in the struggle, and also a longer-term ambition to replace capitalism with a system of true democracy. The document says: “We must throw the full weight of people power behind these demands for a dignified life. People power is the organized force of the masses – a movement to reclaim our humanity and rightful relations with the Earth.”

Politicians Can’t Do What Only Mass Movements Do is the document’s third principle, which underscores The Red Deal’s skepticism that reformist politics can make significant progress against fossil capital. Although the authors say that they “refuse to compromise” they acknowledge the mobilizing potential of “non-reformist reform” that “fundamentally challenges the existing structure of power.”

The final principle is From Theory to Action. This recognizes that the development of real social movements, in which people develop through struggle their own capacity to act and organize, is far more important than having “correct positions” on things. Rather, “correct ideas and theories of change that are worthy of reproduction only matter if they arise from, and directly nourish, our collective movements.”

Beyond the Green New Deal

The authors of The Red Deal do not see their proposals as a “counterprogram” to the Green New Deal, which they praise for its “potential to connect every social justice struggle – free housing, free health care, free education, green jobs – to climate change.” Rather, they see their ideas as a platform that builds upon and goes further than what the various Green New Deal proposals have yet offered.

However, the “primary inspiration” for The Red Deal was not the Green New Deal but the People’s Agreement of Cochabamba. The People’s Agreement was adopted by 30,000 attendees at the World People’s Conference on Climate Change and the Rights of Mother Earth in 2010. The conference, which promoted a suite of radical, people-centered policies on climate change, was hosted by the former President of Bolivia and leftist Indigenous leader Evo Morales.

This inspiration is clear in the way The Red Deal tackles the issues of technology transfer and climate debt owed to nations of the Global South – topics not addressed in some versions of the Green New Deal discussed in Europe or North America. It notes that the past high carbon emissions of the rich countries have in effect “colonized” the atmosphere, meaning nations in the Global South are blocked from pursuing the same path of industrialization due to climate change. This injustice means “any climate policy must also be anti-imperialist” and include “the payment of northern climate debt to the rest of the world.”

The Red Deal also includes criticism of “some Western socialists” who downplay the Global North’s responsibility to reduce its ecological impact rapidly to make room for the South but instead fixate on “technological pipe dreams like mining asteroids, gene editing, and synthetic meat.” Reshaping the wasteful economies of the Global North so they can play a role in healing the planet should instead take priority.

Towards the end of the document the authors note wryly that it’s evident other people have not listened enough to Indigenous people in the past. “Why else would we be on the precipice of mass extinction?” they ask. Those willing to listen today will gain a lot of insight and inspiration from the radical Indigenous activists showing leadership in this fight to save the Earth.