“Record-shattering” extremes – which break weather records by large margins – will become more likely as a result of climate change, a new study finds. The paper, published in Nature Climate Change, finds that the northern mid-latitudes are particularly vulnerable to record-shattering heat. This is exemplified by the recent heatwave over north-western US and Canada, in which many long-standing temperature records were broken by as much as 5C.

The study finds that record-shattering extreme events are likely to occur more frequently in the coming decades, but notes that they would be “nearly impossible” without climate change. It adds that the speed of warming is more important than the level of warming reached when determining the likelihood of these extremes.

The lead author tells Carbon Brief that “extremes in a changing climate [are] like an athlete on steroids – who suddenly breaks previous records in a step-change manner.”

“I think it is an extremely important paper that couldn’t be more timely,” a scientist who was not involved in the research tells Carbon Brief. She adds that, after the heatwave in the Pacific north-west, “many people have suggested our climate models are not able to simulate such events.” However, “this paper shows very nicely that they do. We just haven’t asked the question in quite this way before.”

As global temperatures rise, extreme heat events are becoming more frequent, more intense and longer-lasting. This has caused an uptick in the number of record-breaking extreme temperatures logged around the world in recent years.

The following summer, both France and the UK set all-time records, breaking their previous records by 1.5C and 0.2C respectively. And in the summer of 2020, a heatwave in Siberia broke the all-time record for the region by 0.7C – reaching 38C in the Russian town of Verkhoyansk.

And in June this year, a severe heatwave struck the US and Canada, shattering long-standing temperature records across the region by as much as 5C.

All of these events were “record-breaking”. However, the 2021 heatwave is an example of a “record-shattering” event. Speaking to Carbon Brief, Dr Erich Fischer – a lecturer from ETH Zurich and lead author of the study – explains:

“We define record-breaking events as events exceeding the previous record by any margin. That may often be just 0.1C warmer than the previous event, which is not relevant in terms of impacts. Where the records become really relevant is if they are shattered like in the case of the Pacific north-west heatwave.”

Dr Dim Comou, a climate researcher from the University of Amsterdam, who was not involved in the study, tells Carbon Brief that the research on record-shattering extremes is “very timely.” He adds: “The Canadian heatwave of just a few weeks ago was exactly such an event: There is no similar type of extreme in the historical data that comes even close to the temperatures that were measured in 2021.”

It is important to focus on record-shattering extremes because they have the biggest impacts on society, Fischer says:

“Impacts tend to be largest when an anomaly first occurs. If the same heatwave anomaly occurs again a couple of years later, society is better prepared and adapted – for example, with heat warning systems in place, public health plans, recommendations to the elderly, etc.”

In their analysis, the authors define three categories of extreme weather event, according to the difference between the extreme temperature reached and the annual maximum weekly temperature over 1961-90. These categories are calculated using a measure called “standard deviation,” which is denoted by the Greek lowercase letter, sigma (σ).

Prof Sonia Seneviratne, a climate scientist from ETH Zurich who was not involved in the research, tells Carbon Brief that 2σ extremes “break previous records by a margin of at least two standard deviations –  at least twice the extent of the typical year-to-year variability.” For context – the authors state that the 2003 European heatwave and 2010 Russian heatwave both fall into the 2σ category.

The authors use a collection, or “ensemble,” of climate model runs to project global temperature changes under the extremely high warming RCP8.5 scenario. They then calculate the probability of at least one 2σ event occurring anywhere in the world over 2051-80, using the metric of the hottest week of the year. This is shown in the map below. Red shading indicates areas with the highest probability, while white indicates areas with a low probability. 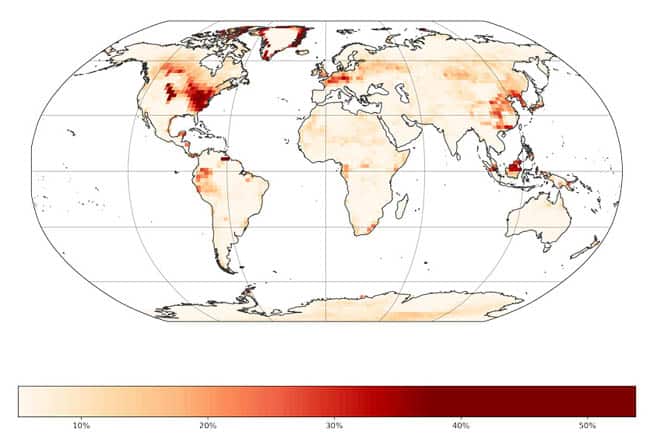 Dr Sarah Perkins-Kirkpatrick – a chief investigator with the ARC Centre of Excellence for Climate Extremes and researcher at the climate change research centre of the University of South Wales, who was not involved in the study, explains that land regions of the northern mid-latitudes are most at risk from record-shattering extremes because these regions have large land masses and land heats faster than water.

The authors find that record-shattering extremes are “nearly impossible” without global warming, but add that climate change makes them “likely to occur in the coming decades.” Fischer uses the analogy of “an athlete on steroids” to explain extremes in a warming climate:

“Athletics world records are rarely broken these days – for example long jumping or high jumping world records date back from the 1980s or early 1990s. This is simply because the longer these disciplines exist, the less likely it is to find a person that even jumps higher and longer. And if they break the record, they typically break it by a tiny margin. I argue that extremes in a changing climate are like an athlete on steroids, who suddenly breaks previous records in a step-change manner.”

As record-shattering extremes are more common in the northern mid-latitudes, the authors calculate the annual probability of at least one record-shattering event happening per year in large landmasses in the northern mid-latitudes. They determine these values for the recent past of 1991-2020 (dark blue), 2021-50 (red) and 2051-80 (light blue). The results are shown below. 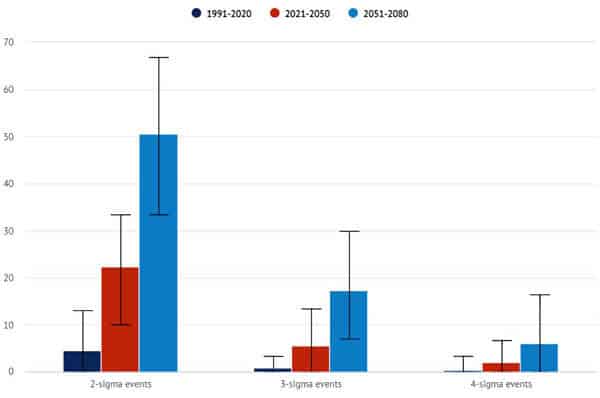 The annual probability of at least one record-shattering event happening per year in any part of the northern mid-latitudes with a land mass greater than 70,000km2, for the recent past of 1991-2020 (dark blue), 2021-50 (red) and 2051-80 (light blue). The extremely high warming scenario RCP8.5 is used for future climate projections. Data credit: Fischer et al (2021) Chart by Carbon Brief, using Highcharts.

The authors find that, in the high-emission scenario, week-long heat extremes that break records by three or more standard deviations are two-to-seven times more probable in 2021-50 and three-to-21 times more probable in 2051-80, compared to the last three decades. In 2051-80, such events are estimated to occur about every six-to-37 years somewhere in the northern mid-latitudes, the authors add.

They carry out the simulations using 16 models from the fifth and sixth Coupled Model Intercomparison Projects (CMIPs). The probability of at least one record-shattering event occurring per year anywhere over the northern mid-latitudes land regions for the different emission scenarios and CMIPs are shown below.

On average, the northern mid-latitudes are four times more likely to experience a 3σ event in the SSP5-8.5 scenario than in the SSP1-2.6 scenario, the authors find. They also conclude that the likelihood of record-shattering extremes “depends on warming rate, rather than global warming level.”

Dr Friederike Otto – associate director of Oxford University’s Environmental Change Institute and a co-author of the attribution study on the 2021 Pacific north-west heatwave, who was not involved in the study – tells Carbon Brief that this is an “extremely important paper,” which “couldn’t be more timely,” She adds:

“After the record-shattering heatwave in the Pacific north-western US and Canada, many people have suggested our climate models are not able to simulate such events. However, this paper shows very nicely that they do. We just haven’t asked the question in quite this way before. The paper further corroborates the rapid attribution study we did with World Weather Attribution as [this study has] shown that, under a strong warming trend, such events are possible to occur without any non-linear feedbacks, but from common heatwave drivers alone.”

Perkins-Kirkpatrick tells Carbon Brief that the record-shattering heat in the US surprised her:

“If I’m completely candid, I was shocked at the temperatures over in Canada. I knew heatwaves are getting worse and getting hotter, but not by that much so soon…we really need to strongly start considering these record-shattering events, because they’re not off the table.”

She adds that the paper is “fascinating”, noting that the method is “relatively simple” but “very effective”. She tells Carbon Brief that the use of multiple model ensembles makes this a “very robust result”:

“Something that I noticed – and I think they did an excellent job with this – is that they used many different a number of different model ensembles, instead of just relying on one climate model… result is very consistent regardless of which ensemble or which way you slice and dice the models, it just goes to show how pertinent it is.”

Comou tells Carbon Brief that the paper is “a very useful contribution to the literature”. And Dr Andrew King – a climate extremes research fellow at the University of Melbourne who was also not involved in the research – tells Carbon Brief the study demonstrates that there is “a lot of potential” for record-shattering events to occur in the current climate – adding that “​​it is worth developing resilient systems so that we can mitigate their impacts”.