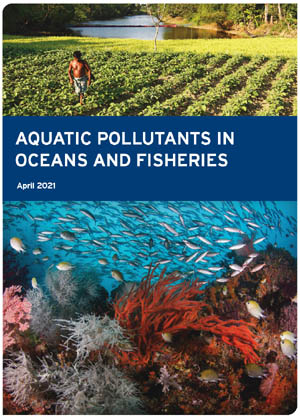 A report released today by the International Pollutants Elimination Network (IPEN) and the National Toxics Network (NTN) says that rising levels of chemical and plastic pollution are major contributors to declines in the world’s fish populations and other aquatic organisms.

Dr. Matt Landos, co-author of the report, says that many people erroneously believe that fish declines are caused only by overfishing. “In fact, the entire aquatic food web has been seriously compromised, with fewer and fewer fish at the top, losses of invertebrates in the sediments and water column, less healthy marine algae, coral, and other habitats, as well as a proliferation of bacteria and toxic algal blooms. Chemical pollution, along with climate change itself a pollution consequence, are the chief reasons for these losses.”

Aquatic Pollutants in Oceans and Fisheries documents the numerous ways in which chemicals compromise reproduction, development, and immune systems among aquatic and marine organisms. It warns that the impacts scientists have identified are only likely to grow in the coming years and will be exacerbated by a changing climate.

As co-author Dr. Mariann Lloyd-Smith points out, the production and use of chemicals have grown exponentially over the past couple of decades. “Many chemicals persist in the environment, making environments more toxic over time. If we do not address this problem, we will face permanent damage to the marine and aquatic environments that have nourished humans and every other life form since the beginning of time.”