Glaciers are disappearing up to twice as fast as previous studies estimated, with disastrous effects on many communities

Two new studies suggest that recent estimates of global ice melt are conservative. In other words, ice is melting much more rapidly than experts thought. As a result, sea levels are rising faster as well.

The first study combines various observations from satellites, on-the-ground measurements, and model-based estimates to create a clearer picture of the state of Earth’s ice between 1994 and 2017. Essentially, it captures a global tally of change in ice mass over that time period. The resulting measurements of ice loss and sea level rise fall in the upper range of scenarios forecast by the Intergovernmental Panel on Climate Change (IPCC), a body within the United Nations meant to provide objective science related to climate change. The IPCC’s scenarios were laid out in their 2019 special report on oceans and the cryosphere, itself a recent overview of assessment work.

Faster sea level rise means that more areas will experience devastating floods sooner, and we are already seeing more of such events.

The second study zooms in on a particular region, rather than compiling measurements at the global scale. Focusing on Greenland, this study investigates how warmer ocean water affects marine terminating glaciers — those that end at the ocean. The authors identified at least 74 glaciers with retreats strongly influenced by warmer ocean waters, which expedite mass loss by undercutting a glacier’s base. Thus, the rest of the glacier is weakened and can collapse. Importantly, glacial melt contributes to rising sea levels; icebergs calving as glaciers thin adds water to the oceans. 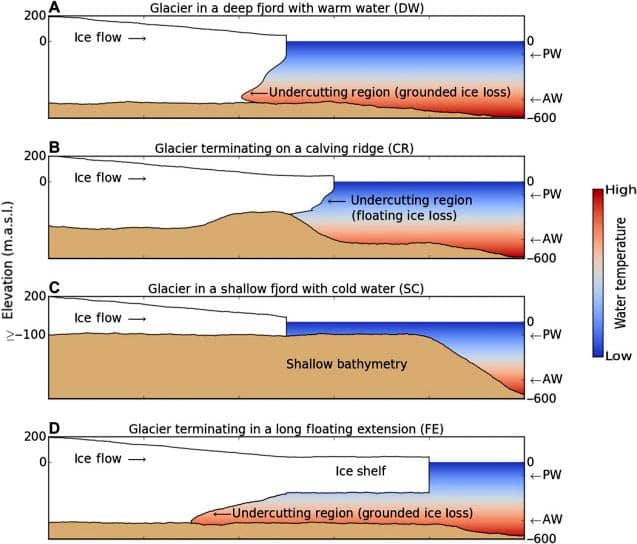 Top and bottom illustrations show how the water thins the ice from below, making it easier for pieces to break off. (Source: Michael Wood et. al./Ocean forcing)

The authors of the first study emphasized that there is little doubt that the majority of ice loss is due to climate warming. In an interview with GlacierHub, Michael Zemp, director of the World Glacier Monitoring Service and a professor of glaciology and geomorphodynamics at the University of Zurich who is not affiliated with the study, stated that “Overall, the data show that climate change is happening and impacts are only increasing.”

Zemp also highlighted the complexity of systems in the cryosphere, emphasizing an important dynamic between the two studies in question. Broadly, the driving force of increased ice melt is climate warming. However, within glaciated regions around the world, there are specific characteristics that need to be taken into consideration.

For example, as the Greenland study demonstrates, the region’s glaciers are losing mass much more quickly as the ocean waters melt them from below, making it more easy for pieces to break and fall off. As this regional phenomenon affects the glaciers so significantly, the study authors point out that “projections that exclude ocean-induced undercutting may underestimate mass loss by at least a factor of 2.”

From the different characteristics of each region to the various measurement types (satellite, on-the-ground, modeling) to the time periods in which measurements are observed, models of the cryosphere have much to incorporate. Zemp notes that reports by the IPCC, which attempt to pull data from many different studies, can suffer as a result of the challenges of incorporating wide-ranging factors.

When asked how to reduce ice melt, Walter Immerzeel, a professor at Utrecht University, answered, “the only real option is to reduce greenhouse gas emissions ASAP. The re-entry of the U.S. in the Paris climate agreement is a hopeful sign.”

Zemp’s conclusion echoed Immerzeel’s: “the response is not easy, but still very simple. We have to reduce greenhouse gas emissions, and the Paris Agreement will hopefully help with this.”

The Greenland study notes that from 2008-2017, there was a cooling period in the ocean near Greenland. Despite this cooling, grounded ice (ice on land) continued to retreat significantly. As a result of previous warming, the glaciers have already been removed from their state of equilibrium, meaning the balance between mass gain and loss is gone. Even if emissions stopped immediately, there would still be lingering effects and mass loss as a result of the damage that has already been done. If emissions stopped, global temperatures would still be high enough for ice to continue to melt.

“It [climate change] was already urgent, but these conclusions further emphasize this. We need to act now and invest in both mitigation (reducing emissions) and adaptation (being prepared for the impact),” Immerzeel told GlacierHub.

He also noted that increased ice melt has significant implications for communities which rely on glaciers as sources of fresh drinking water and water for irrigation. For example, villages in Peru rely heavily on the Cordillera Blanca mountain range. The mountains and glaciers provide a rich cultural history, economic benefits through tourism and water used for irrigation, tourist guesthouses and household consumption. As the glaciers melt, the traditions of the culture that rely on the glaciers disappear, and people’s livelihoods are threatened by the impacts on tourism and agriculture and the sudden appearance of floods.

While certain damages are unavoidable, there can absolutely be more harm to come if significant action is not taken now. Whether action is undertaken to protect current vulnerable communities or future generations, reducing emissions can shrink the burden people will inevitably have to bear. Communities are being affected as glaciers melt and sea levels rise, but the extent to which these damages will occur is still uncertain and can still be changed if the right measures are taken.

Principal studies referenced in this article: