Climate Leviathan warns that a worldwide imperial state is on the agenda, but provides no credible arguments or evidence. 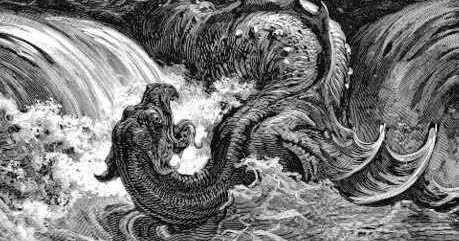 “Let those curse it who curse the day, who are ready to rouse up Leviathan.” (Job 3:8) 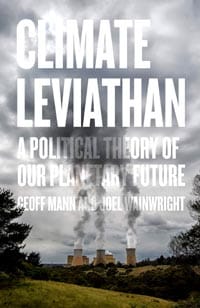 “Climate Leviathan will be the fundamental regulatory ideal motivating elites in the near future.”

Climate Leviathan is a jarring, dissatisfying read. Its best arguments are left undeveloped. What should have been tangential points are expanded upon in bland, circuitous detail. Its central proposition is not supported by strong evidence. It promises a new political theory, but its conclusions are vague, hesitant and almost painfully schematic.

The core argument of authors Geoff Mann and Joel Wainwright is that a liberal capitalist supra-national world state or “sovereignty” is a likely way that the capitalist system will adapt to runaway climate change and other ecological breakdowns. They call this outcome the Climate Leviathan.

Mann and Wainwright write about the Climate Leviathan as a warning. It poses a future “new imperial hegemony” where a single state or handful of powerful states attain global hegemony and “seize command, declare an emergency, and bring order to the Earth, all in the name of saving life.”

This new global state will be “a regulatory authority armed with democratic legitimacy, binding technical authority on scientific issues, and a panopticon-like capacity to monitor the vital granular elements of our emerging world.” “Climate Leviathan will be the fundamental regulatory ideal motivating elites in the near future.”

Why are the authors so sure that the capitalist elite consensus could develop in this way? Which political parties, organizations or powerful interests are campaigning for a world government of any description? In which media are the elites debating with one another why a planetary sovereign is needed? What sectors of capital are willing to sacrifice their position vis-à-vis their competitors in order to preserve the long term survival of their class?

None of these questions are addressed in the book. Instead, the authors point to the annual United Nations climate summits which, we are told, “represent the first institutional manifestation of this dream of planetary regulation, a process that the dominant capitalist nation-states will consolidate as climate-induced disruptions of accumulation and political stability become more urgent.”

The notion that the United Nations climate process could be a platform for creating some kind of world government is just not credible. This is a body with a three-decade long record of failure to curb carbon emissions, non-enforceable climate targets, a deep susceptibility to disruption by climate-denier led governments and corporations, and a  conservative approach to climate science in general. At the very least, Mann and Wainwright are wildly exaggerating this moribund institution’s potential.

Overdone rhetoric about the United Nations climate process is typically the preserve of far right conspiracy theorists, with their paranoid ideas about secret plans for a one-world government. Mann and Wainwright are on the left, but their Climate Leviathan is no more convincing.

Surely, if capitalist elites are soon to adopt a Climate Leviathan option as their “fundamental regulatory ideal,” there would be evidence of contemporary discussions, plans and debates about it. If these exist, they are not found in this book.

Instead, there are many detours that discuss merely how to think about the “Climate Leviathan,” drawing on Hobbes, Hegel, Keynes — and even Nazi political theorist Carl Schmitt.

Mann and Wainwright simply fail to show that a Climate Leviathan system of global governance is imminent in or might emerge from today’s class struggle. They just assert that the “three distinct logics” of modern weaponry, “capitalism’s tendency toward crisis,” and the ongoing ecological crisis point to this outcome.

The book poses its Climate Leviathan outcome of a liberal capitalist planetary sovereignty against three other possible futures.

Climate Behemoth is the authors’ unnecessarily obscure name for a nightmare future in which rival capitalist nation states respond to eco-disaster with increased repression, racism and war. “If Leviathan essentially reflects the dream of a sustainable capitalist status quo … Behemoth [is] a conservative reaction to it.”

Without revolutionary systemic change, this reactionary future seems all too plausible. It amounts to a continuation of the dominant capitalist responses to the climate crisis thus far. Not so for the authors who insist that “among the possible paths we can imagine, Climate Leviathan is presently leading”. But they offer little evidence for why that option is more likely.

Having exhausted Bible monsters (Leviathan, Behemoth) the authors make do with a secular monster for their third future dystopia. What they call Climate Mao is a caricature that presents state-led ecosocialist policies as inescapably authoritarian. They regret that “Climate Mao appeals so strongly to some anticapitalists. Refusing capitalism, they call no less energetically for a sovereign supreme to save us all – and punish those who have brought us to the precipice.” This would have been more useful if they had provided examples, but they don’t say who these authoritarians are.

However, their discussion of Climate X — what it might be like, how it might come about — is abstract and evasive. “We might expect [Climate X] to emerge as a ragtag collection of the many but we really cannot say anything definite.”

Not saying anything definite is a recurring problem with this book. After insisting at length that Climate Leviathan is the most likely outcome of today’s trends, the authors are suddenly less confident in their final chapter. “While our description of Leviathan as a definite social formation may therefore be a contingent abstraction and may prove to be wrong, the specter of Leviathan is no less real.”

What? If a prediction turns out to be wrong, as I suspect Mann and Wainwright’s will be, then its “specter” isn’t real either. Marx and Engels could metaphorically describe communism as a specter haunting Europe because they were discussing a real political trend, not an abstraction. Specters are not real, and abstract thought experiments are no substitute for concrete political analysis.

Simon Butler is co-author, with Ian Angus, of Too Many People: Population, Immigration, and the Environmental Crisis.