Can the world’s most important rain forest be saved? 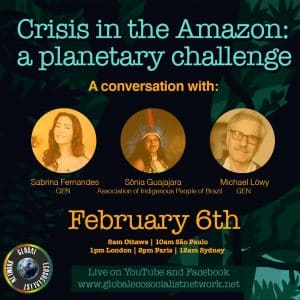 The continued monstrous burning of the Amazon rain forest under the Bolsonaro government is a threat not just to the Indigenous and other people who live there but to everyone around the world.  The Global Ecosocialist Network is pleased to present an important meeting on the desperate crisis in the Amazon, featuring three very distinguished speakers discussing what is happening and what must be done.

A CONVERSATION WITH: Michael Lowy, author of Ecosocialism: A Radical Alternative to Capitalist Catastrophe; Sabrina Fernandes, of Subverta – PSOL, creator and producer of Tese Onze; Sônia Guajajara, executive coordinator of the Association of Indigenous People of Brazil and former vice-presidential candidate.