A previous C&C article, Capitalism’s growing assault on the oceans, argued that the world is entering  “a new phase in humanity’s relationship with the biosphere, where the ocean is not only crucial but is being fundamentally changed.” It cited research that described and graphed capital’s growing drive to industrialize the oceans and sea beds — a process that some scientists have dubbed the Blue Acceleration.

A paper published this week in the Proceedings of the National Academy of Sciences adds more urgency, showing that deep-ocean mining poses significant risks to the vast mid-water ecosystems that lie far above the sea bed sites where mining is planned. The following summary is based on materials provided by the University of Hawaiʻi. 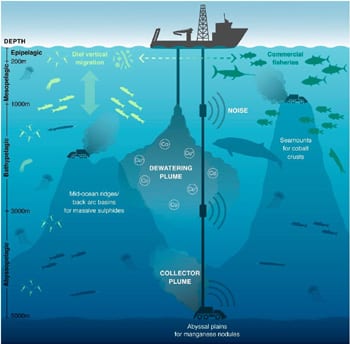 Interest in deep-sea mining for copper, cobalt, zinc, manganese and other valuable metals has grown substantially in the last decade and mining activities are anticipated to begin soon. Deep-sea mining poses significant risks, not only to the area immediately surrounding mining operations but also to the water hundreds to thousands of feet above the seafloor, threatening vast midwater ecosystems.

Currently 30 exploration licenses cover about 580,000 square miles of the seafloor on the high seas and some countries are exploring exploitation in their own water as well. Thus far, most research assessing the impacts of mining and environmental baseline survey work has focused on the seafloor.

However, large amounts of mud and dissolved chemicals are released during mining and large equipment produces extraordinary noise—all of which travel high and wide. Unfortunately, there has been almost no study of the potential effects of mining beyond the habitat immediately adjacent to extraction activities.

“This is a call to all stakeholders and managers,” said oceanography -professor Jeffrey Drazen, lead author of the article. “Mining is poised to move forward yet we lack scientific evidence to understand and manage the impacts on deep pelagic ecosystems, which constitute most of the biosphere. More research is needed very quickly.”

The deep midwaters of the world’s ocean represent more than 90 percent of the biosphere, contain 100 times more fish than the annual global catch, connect surface and seafloor ecosystems, and play key roles in climate regulation and nutrient cycles. These ecosystem services, as well as untold biodiversity, could be negatively affected by mining. The paper provides a first look at potential threats to this system.

“Hawaiʻi is situated in the middle of some of the most likely locations for deep-sea mining,” said Drazen. “The current study shows that mining and its environmental impacts may not be confined to the seafloor thousands of feet below the surface but could threaten the waters above the seafloor, too. Harm to midwater ecosystems could affect fisheries, release metals into food webs that could then enter our seafood supply, alter carbon sequestration to the deep ocean, and reduce biodiversity which is key to the healthy function of our surrounding oceans.”