New studies show global warming is raising the risk of sudden, near total collapse of the wild populations that sustain human society. 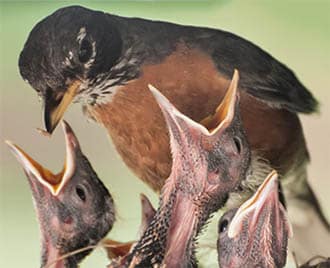 New studies show global warming is raising the risk of sudden, near total collapse of the wild populations that sustain human society.

Worldwide, entire ecosystems could collapse as the planetary thermometer soars: rising global heat could see the Earth’s average temperature rise by 4°C (right now the world is heading for a rise of more than three degrees).

And then one in six of the complex communities of plants and animals in wetlands, grasslands, forests or oceans could drastically alter or fail. That is because at such temperatures more than one in five of the creatures in that network of co-dependencies would in the same decade experience temperatures beyond their normal tolerance levels.

The prediction is based on data that pinpoint the geographical ranges of 30,652 birds, mammals, reptiles, amphibians, fish and plants, and climate data from 1850 to 2005. “We found that climate change risks to biodiversity don’t increase gradually,” said Alex Pigot of Imperial College London, in the UK, who led the research.

“Instead, as the climate warms, within a certain area most species will be able to cope for a while, before crossing a temperature threshold, when a large proportion of the species will suddenly face conditions they’ve never experienced before. It’s not a slippery slope, but a series of cliff edges, hitting different areas at different times.”

The finding – published in the journal Nature on April 8, – should come as no great surprise to the world’s zoologists, botanists, ecologists, foresters, marine scientists and conservationists.

They have repeatedly warned that as global temperatures rise, and climate patterns become increasingly unstable, in response to ever-higher greenhouse gas emissions from power stations and car exhausts, and forest destruction, both individual species and even whole habitats could be exposed to loss and species extinction.

Such threats can be prefigured even in subtle changes in species behavior. Within this month, Spanish ornithologists who have studied the nightingale Luscinia megarhynchos since 1995 report in the journal The Auk: Ornithological Advances that in two decades, as Spanish summers became hotter and more parched, the wings of each new generation of birds have become progressively shorter.

A shorter wingspan in proportion to body length creates potential survival problems for a species that breeds in Europe but prefers to fly to sub-Saharan Africa for the winter.

And across the Atlantic, another species, the American robin Turdus migratorius now takes wing 12 days earlier each spring in Mexico and the US to fly to its summer breeding grounds in Canada and Alaska.

The ornithologists report in the journal Environmental Research Letters that GPS tracking of 55 individual birds confirms that the bird may be timing its migration to the snow melt and the first arrival of insects in the high latitudes nearer the fast-warming Arctic.

So far, the planet on average has warmed around only 1°C above the long-term average for most of human history. But Dr Pigot and colleagues in the US and South Africa wanted to look at the big picture of potential change in species everywhere as global heating reaches 2°C – the upper limits that the world’s nations promised in a key international agreement reached in Paris in 2015 – and then goes on soaring.

So they took their species data, and mapped it onto a global grid divided into 100-km-square cells, and then fine-tuned the temperature predicted by climate scientists to see where species and their habitats would experience ever-rising heat beyond their comfort zone.

Any ecosystem is a network of interdependencies: insects pollinate flowers, animals disperse seed and prey upon pests and each other in an intricate set of arrangements that have evolved over tens of thousands of years in a particular pattern of temperature and precipitation. Any disturbance ripples through the entire habitat.

The scientists’ atlas of potential ecological disruption included isolated bits of the world such as the Cayman Islands in the Caribbean and the Gobi Desert in Mongolia as well as the Amazon basin and the forests and clearings in the Congo, and one of the world’s richest marine habitats, the so-called Coral Triangle bounded by the Philippines, Malaysia, Papua New Guinea and the islands of the Western Pacific.

They found that if warming could be contained to 2°C or less, only about one community in 50 would be faced with exposure to such disruption: they warn however that even this 2% includes some of the richest habitats on the planet.

They also warn that by 2030, the tropical oceans will start to experience temperature regimes that have no precedent in human history. The tropical forests could be at risk by 2050. Ominously, almost three-fourths of all the species to face unprecedented temperatures before the end of this century will all do so more or less at the same time.

“Our findings highlight the urgent need for climate change mitigation, by immediately and drastically reducing emissions, which could help save thousands of species from extinction,” Dr Pigot said.