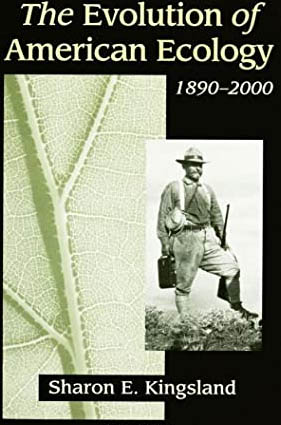 I used to use “ecology” as a synonym for “environmentalism”, a conflation probably common to much of the population. At some point during my years of political and environmental activism I became more actively interested in science, and eventually enrolled in a biology degree and learned a new, more narrow definition of ecology, viz. the scientific study of organisms in their interactions with each other and their environment.

Having a degree in botany focusing on plant ecology, I decided I wanted to learn more about the history of ecology. As a subject analyzing relationships it seems to bear some relation to social sciences, and occasionally earns the ridicule of the so-called “hard” sciences like physics and chemistry.

Of course the rejoinder is that ecology isn’t less scientific, just more complicated and harder to do well. But leaving interdisciplinary pissing contests aside, the concept of what ecology is, how it came into being, and how it developed from there is interesting because I think ecology is also an incredibly important science in the anthropocene.

So I looked for books on the history of ecology, and Dr Jeremy Fox of the blog Dynamic Ecology recommended this one. It’s only about American ecology, which seems a bit parochial (didn’t ecology come from people like Humboldt and Darwin in Europe? Didn’t it develop internationally?). But trying to write a world history of ecology sounds like a herculean task so that is probably not a fair criticism.

The book starts slowly (as I guess the discipline did) with the establishment of the New York Botanic Gardens and some of the field studies they initiated. This seems to take up a bit too much of the book, but appears to be deliberately included for reasons that become clear when you reach the end.

One thing that really struck me is the patrician, racist and eugenicist views that dominated the field in its early days. Kingsland suggests that the early push into ecology was driven by the desire to understand evolution in order to control it, something seen in modern times in ardent supporters of GMO crops and fads like “biohacking” more than in scientific ecology.

An early contest between a view of ecology as incorporating human ecology and one that focused on  the ecology of (relatively) undisturbed natural ecosystems was apparently won by the latter, with the famous ecologist Frederic Clements as the driving influence in the new field that opened up. This ecology seems to have been dominated by botanical and vegetation studies, and debates around them. Animal ecology was much less a focus, at least in Kingsland’s narrative.

Yet the debate over the place of humans in ecological studies never quite went away, as the history makes clear, with C.P. Snow’s 1959 warning about the “two cultures” of science and humanities playing an important role. Even so, Kingsland relates that much of scientific ecology became increasingly dominated by mathematical modelling of energy and resource flows.

A return to paying more attention to the human role in the environment occurred post-war, with Rachel Carson’s seminal book Silent Spring and other ecologists sounding environmental warnings. Kingsland mentions Garrett Hardin (author of the dubious 1968 “Tragedy of the Commons” theory) and Paul Ehrlich (who published The Population Bomb in the same year). While these latter two individuals were influential and worthy of mention, their theories (based in neo-Malthusian population theory) were contentious, and are largely discredited. Counterposed views that rejected crude extrapolations of biological processes to human social organisation are sadly left out (most notably, Barry Commoner).

Kingsland moves to complete her work (published 2005) with some of the urban ecology that was initiated in the 1970s and 1980s, that put humans back in the picture — not just in their impact on nature, but in their use and appreciation of it. At this point it becomes clear that Kingsland is not merely chronicling events, but has her own view on what ecology needs to focus on into the future. She promotes interdisciplinarity and anthropocentric sociological and ecological study to help integrate humans and nature once more.

“Unless one understands what people need from their environment and how to satisfy their desire for safe and healthy environments, it will be difficult to relate abstract and esoteric scientific arguments to ordinary lives and produce fundamental change in how we exploit our environment.”

In this argument, there is something of a return to the debates of the 1920s about how to situate humans in scientific ecology. And as far as the argument goes, it is a good one. It is bringing back together ecology and environmentalism, insofar as they are two different strands of praxis.

However, I have a feeling that in making this argument Kingsland has missed some actual developments in ecology. In particular, the rise of genetics out of biochemistry since the 1970s has revolutionized a lot of evolutionary study. While a few nutty and/or dangerous ideas about “de-extinction” and deliberate extinction of pests (gene drives) seem to revive the ideas of “controlling evolution” from the early days of ecology, more of ecological genetics is concerned with conservation by protecting the genetic diversity of species and of evolution, and the tools available to do so seem worth a mention — especially in light of the accelerating extinction event triggered with the advent of the anthropocene.

Perhaps it’s easier to point to these trends writing now than it was in 2005 when the book was published. Another (possibly also unfair) criticism I think I would make is that I think in trying to sketch what the author sees as the main developments and directions in ecology, the book skips a lot that followed on from each new direction and development.

For example, while the book focuses on things like trophic energy flows and mathematical ecology from the 1950s (or thereabouts), the earlier evolutionary ecology had not stopped. Ideas like the theory of island biogeography that were very important rate no mention. In the discussion of urban ecology and patch dynamics, modern landscape ecology as a sub-discipline is described in all but name (but perhaps it’s too new a concept to feature directly).

One key point that the book makes is treated too briefly. Studying humans may be important, but one needs to ground it by studying what is left of (relatively) unchanged nature, or else we lose the baseline and end up studying humans’ impact on humans’ environment in a circular fashion (subject to the vagaries of culturally shifting baselines). I think there is still an important place for patient field work and modelling of the relatively undisturbed natural ecosystems, in their basic functioning as well as the impact of humans.

The book wasn’t exactly what I expected or hoped for in a history of ecology, but it sure has plenty of food for thought, and perhaps that is better than a straight, dry chronicle of researchers and their most famous discoveries and theories.