Even if Paris goals are met, climate change could wipe out 20% of species by 2070. If warming is greater, far more will die. 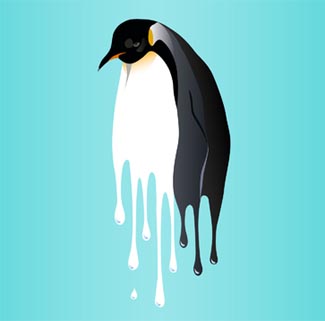 Within 50 years, a third of all plant and animal species could be caught up in a mass extinction, as a consequence of climate change driven by ever-rising temperatures. What is new about this warning is the method, the precision, the timetable and the identification of a cause.

And – entirely felicitously – support for the prediction is backed by a series of separate studies of individual species survival in a world rapidly warming because of human commitment to fossil fuels.

Tiny marsupial insect-hunters in Australia could, on the evidence of direct experiment, fail to adapt to ever-higher thermometer readings, and quietly disappear.

As frogs and other amphibians in Central America are wiped out by invasive fungal pathogens – perhaps assisted by climate change – a set of snake species that prey upon them have also become increasingly at risk.

And directly because the Arctic is warming faster than anywhere else on the planet, the polar bears of Baffin Bay in Canada are thinner than they were 30 years ago, and have fewer cubs. That’s because Ursus maritimus hunts its seal prey on the sea ice. And as the winter ice forms later and melts earlier each decade, the bears have begun to go hungry.

Biologists, ecologists and conservationists have been warning for four decades that planet Earth could be on the edge of a sixth Great Extinction, as a simple consequence of the growth of human numbers and human economies, and the parallel destruction of natural habitat.

They have also repeatedly warned that climate change driven by human-triggered planetary heating would inevitably accelerate the losses.

But researchers from the University of Arizona have now confirmed the climate connection by using another approach: they decided to look directly at the numbers. They report in the Proceedings of the National Academy of Sciences that they selected data from 538 species and 581 places around the globe: they chose these numbers and sites because they could be sure that specific animal and plant species had been repeatedly surveyed over intervals of at least a decade.

They also factored in the changes in local climate conditions at each site, and isolated 19 different variables in the climate machine to work out what it could be about global heating that would directly pose the most significant threats. They also considered the options open to their chosen species: could these, for instance, migrate easily, or tolerate longer periods of extreme heat?

And then they did the calculations. They found that 50% of the chosen species went extinct locally if temperatures rose by more than 0.5°C, and 95% if the mercury reached an additional 2.9°C.

In the last century, the planet has warmed by 1°C above the average for most of human history and prehistory. Right now, thanks to ever-increasing fossil fuel use and continued forest destruction, the planet could be more than 3°C warmer by 2100.

But the researchers also found that the climate factor most closely linked to the extinction of any population was simply the maximum annual count – the hottest daily highs in summer.

This also implies that extinction could be two or even four times as frequent in the tropics as in the temperate zones: it is in the tropics – the reefs, the rainforests, the wetlands and savannahs – that the world’s species are concentrated.

Antechinis flavipes, or yellow-footed antechinus, is a native Australian: it is not exactly a mole, or a mouse, or a shrew. It is a little marsupial carnivore with an unhappy love life: males mate in a frenzy and then tend to die from stress-related immune system breakdown.

It is also sensitive to temperature. When the mercury drops, the creature can go into a torpor and once comatose can even sleep through a bushfire.

Norwegian scientists report in the journal Frontiers in Physiology that they exposed 19 captive juveniles to spells of cold (17°C) and hot (25°C) temperatures, measured their growth and metabolic rate, and observed changes in behaviour. They conclude that, while individuals of the species can cope with short periods of high temperature, they may not have any way of surviving extended heat extremes.

Which is a problem for antechinus, because all the predictions for Australia – and indeed most of the planet – is that as the century proceeds and ever more greenhouse gases build up in the atmosphere, the hottest spells will become hotter, more frequent and more extended.

North American researchers have been tracking the polar bears who hunt seals and mate in Baffin Bay, between north-eastern Canada and Greenland, for almost three decades. They report in the journal Ecological Applications that when sea ice retreats, the bears wait on Baffin Island and live on their accumulated fat.

In the 1990s, the average stay on land – and away from the bears’ preferred prey – was 60 days. In the last decade, this rose to 90 days. Sampled females proved to be thinner than they had been, and were more likely to have one cub rather than two, all because unseasonally high temperatures in the Arctic mean that the hunting season on the ice is becoming ever shorter.

In 2004, the population of amphibians in a national park in Panama started to perish on a huge scale, and an estimated 30 species of frog and other creatures all but vanished in the wake of a pathogen fungus outbreak.

US scientists report in the journal Science that they set out to look at their wildlife observational data before and after the outbreak to measure the effect on the region’s snake species that prey on amphibians.

Even though the scientists logged 594 surveys in the seven years before the outbreak and 513 in the six years that followed, they had to use mathematical techniques to come up with probabilities of local snake extinction, because snakes are hard to observe at any time. Of the 36 snake species recorded there, 12 have been observed only once, and five only twice.

The bad news is there is an 85% probability that there are now fewer snake species than there had been, simply because of the disappearance of amphibian prey.

The study also highlights another worry for conservationists and ecologists: extinction of species is happening at an accelerating rate, but biologists still cannot put a number to the total of species at risk. Most of them have never been described or named. Like some of the snakes of Panama, they will have gone before scientists even knew they were there.

The climate connection with the worldwide loss of amphibian species is still uncertain. The certainty is that climate change will make life too hot for many species that – because what was once wilderness has now been cleared for cities, quarries, farms and commercial plantations – can no longer shift to cooler terrain.

John Wiens of the University of Arizona, one of the authors behind the research that predicts massive extinctions by 2070, thinks there is something that can be done.

“If we stick to the Paris Agreement to combat climate change, we may lose fewer than two out of every 10 plant and animal species on Earth by 2070. But if humans cause larger temperature increases, we could lose more than a third or even half of all animal and plant species, based on our results.”