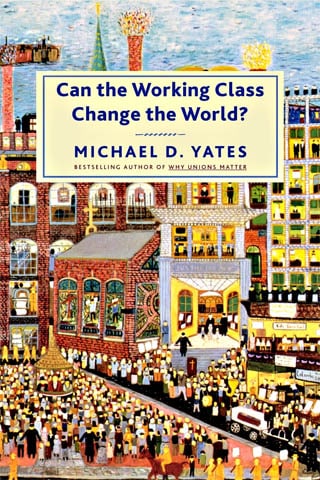 The title of Michael Yates’ new book asks a question that every socialist has heard many times. We hear it from liberals who think changes can only be made by working inside the system. We hear it from radicals who simply can’t imagine working people moving against the system. And if we are honest we will admit that when radical activity is in a lull and it is hard to get a hearing, we sometimes ask it of ourselves.

Is it really possible that people who voted for Trump or Clinton — two faces of global reaction — might one day overthrow capitalism?

If you are feeling that way, this book is the perfect antidote. In fewer than 200 clearly-written pages it shows how working people have already changed the world in profound ways, what remains to be done (a lot), and what must happen for the working class to fulfill its potential as a revolutionary force.

Yates presents his argument in six chapters, going from what the working class is, through why capitalism’s deadly reign must be ended, to how working people must organize to win radical change. At each step he illustrates his case with concrete examples of real struggles around the world.

Chapter One argues that the formal definition of the working class — everyone who works for a wage or salary — is useless for determining who can change the world. Police and prison guards work for wages, but they are not on our side. Nor are politicians, corporate executives, and “other highly paid shills and apologists for business.” On the other hand, there are millions of people who don’t get wages, but are part of the working class or potential allies —  those whose full-time responsibility is raising children, the unemployed, workers in the informal economy, small farmers who live permanently on the brink of hunger.

“At any given time there are several billion people working, in the reserve army of labor, or peasants. Should ways be found to organize and unify, say, even 20 percent of them, they could surely change the world.”

Chapter Two provides an analytical framework for understanding capitalism as “a hegemonic social system,” that is based on exploitation in the workplace, but that “seeks to dominate as many aspects of our lives as possible.” Yates shows that “working people are exploited and expropriated, making it impossible for them to achieve real freedom, autonomy, and unalienated lives in a capitalist society.”

Chapter Three looks at exploitation and oppression concretely, explaining why Marxists see workers as the agents of social change. It considers not only the forces that unite workers against the system, but the barriers — skill levels, nationality, race and gender, in particular — that pit them against each other and weaken the struggle.

Chapter Four addresses a subject that even experienced socialists often neglect, the victories and changes that working class struggles have already won, over the determined opposition of bosses and capitalist governments. In that important sense, workers not only can change the world, but have already done so.

Chapter Five demonstrates that despite those gains, the power of capital is still intact, and some important advances, including the successful revolutions in Russia and China, have been reversed. So long as capitalism remains globally dominant, no win for democracy and justice is permanent.

Like the book as a whole, Chapter Six is titled Can the working class change the world? The first word of that question is important — it is clear that working people can change the world, but will they? Getting from can to will isn’t going to be easy or quick.

“Only radical thinking and acting have any chance staving off accelerating levels of barbarism. Newer instruments must be forged: radically democratic labor unions and political parties, a scaling-up of collective self-help activities, massive levels of ‘occupy, resist, produce.’…  It will take time for a class riven with so many fundamental cleavages, by race. ethnicity, gender, and imperialism most importantly, to unify itself and destroy its class enemy.”

In this chapter, Yates discusses “multiple terrains of struggle” that will be central to building new organizations built on democracy and solidarity, that fight for immediate gains while never losing sight of the central objective.

“There is no reason for a working-class political project to exist unless its aim is the defeat of capital. Demands should be radical and principled, and they should be adhered to. Tactical compromise might sometimes be necessary, but this can never be a strategy.”

Michael Yates worked for many years as a labor educator, teaching working people in classrooms and union meetings across the U.S. Those years taught him something very important — how to express Marxist ideas in everyday English, without condescension, without false bravado or illusions, and without any hint of dogmatism. The result is a superb popular account of what’s wrong with capitalism and what working people must do to get rid of it. Even if you think you know all this, you should read it to learn, by shining example, how to explain socialist ideas in clear, concise and convincing terms.

Can the Working Class Change the World? should be on every ecosocialist’s bookshelf. More than that, it should be in every radical worker’s hands. It’s a book to be read and discussed and argued over and acted on. Michael Yates has made an important contribution to building movements that not only can change the world, but must.