Le Devoir, the francophone newspaper of record in Canada, reviews new French translation of Facing the Anthropocene, and interviews its author, Ian Angus

Le Devoir, the francophone newspaper of record in Canada, reviews new French translation of Facing the Anthropocene, and interviews its author, Ian Angus

Le Devoir, the only independent large-circulation newspaper in Québec, is widely considered to be the francophone newspaper of record in Canada. This review and interview were published in newspaper’s weekend supplement, Le D Magazine, on  March 10. The translations below are by Richard Fidler and Ian Angus. 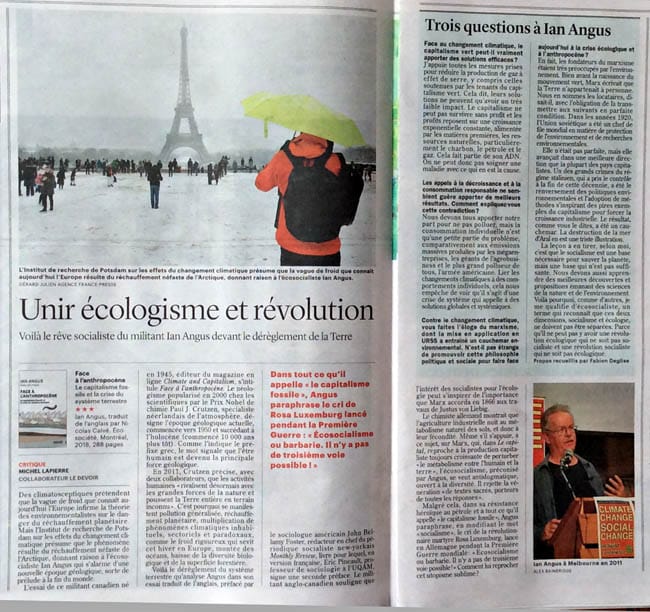 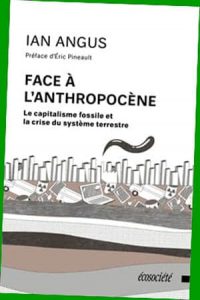 Some climate skeptics argue that the cold wave now being experienced in Europe contradicts the theory of the environmentalists concerning the danger of global warming. But the Potsdam Institute of Research on the Effects of Climate Change estimates that the phenomenon results from harmful warming in the Arctic, confirming the argument of ecosocialist Ian Angus, who  warns of a new geological epoch, a sort of prelude to the end of the world.

This Canadian activist, born in 1945, is editor of the on-line magazine Climate and Capitalism. His essay is titled Facing the Anthropocene. That neologism, popularized among scientists in 2000 by chemistry Nobel Prize winner Paul J. Crutzen, a Dutch atmospheric specialist, designates the present geological epoch, which began around 1950 and which followed the  10,000 year-old the Holocene. As the Greek prefix indicates, the word means that human beings have become the principal geological force.

In 2011 Crutzen, along with two collaborators, explained that human activities “rival the great forces of Nature and are pushing the Earth into planetary terra incognita.” That is why we are experiencing generalized pollution, global warming, a qualitative increase in unusual sectoral and paradoxical climate phenomena such as the severe cold afflicting Europe this winter, rising ocean levels, and a decline in biological diversity and forest cover.

This disruption of the Earth system is analyzed by Angus in his essay, translated from the English and prefaced by the American sociologist John Bellamy Foster, editor in chief of the New York-based socialist periodical Monthly Review. The French translation is also prefaced by Éric Pineault, a sociology professor at the Université du Québec à Montréal (UQAM). The English-Canadian activist notes the interest of socialists in ecology draws on the importance that Marx saw in 1866 in the works of Justus von Liebig.

The German chemist showed that industrial agriculture harmed the natural metabolism of soils and hence their fertility. Although it relies in this regard on Marx, who in Capital charged that ever-growing capitalist production was disrupting “the metabolism between people and nature,” the ecosocialism that Angus advocates seeks to avoid dogmatism and is open to a range of views. He rejects the worship of “a set of sacred texts that contain all the answers.”

Nevertheless, in his heroic resistance to petroleum and everything that he calls “fossil capitalism,” Angus paraphrases the cry of the revolutionary martyr Rosa Luxemburg in Germany during the First World War: “Ecosocialism or barbarism. There is no third way!”

How can we criticize such a sublimely utopian view?

IA: I will support any measure that actually reduces greenhouse gas emissions, including any proposed by advocates of “green capitalism.” But such measures will have little impact. Capitalism can’t survive without profit, and profit depends on constant exponential growth, using ever more raw materials and resources, especially energy sources such as coal, petroleum and gas. We might say that they are built into the system’s DNA  You can’t cure a problem using the methods that caused it.

ML: Calls for degrowth and responsible consumption don’t seem to do any better. How do you explain this?

IA: We should all do our best not to pollute, but individual consumption is only a small part of the problem, compared with the massive emissions produced by giant corporations, agribusiness, and the largest polluter of all, the U.S. military. Blaming climate change on individual behavior prevents us from seeing that it is a systemic crisis that calls for global and systemic solutions.

ML: Against climate change you endorse Marxism, but its application in the USSR was an environmental nightmare. Isn’t it inappropriate to promote that political and social philosophy today, to respond to the ecological crisis and the anthropocene?

IA: Actually, the founders of Marxism were deeply concerned with environmental issues. Long before the modern green movement was born, Marx wrote that no one owns the earth. We are simply its possessors, he said, and we have a duty to pass it on to future generations in good condition. And in the 1920s, the Soviet Union was a world leader in nature protection and ecological research. They weren’t perfect, but they were moving in the right direction, much more than any capitalist country.

One of the great crimes of the Stalin regime, which took control at the end of the decade, was its reversal of those environmental policies, and the adoption of methods copied from the worst capitalist examples, in order to push rapid industrial growth. The result, as you say, was a nightmare. The destruction of the Aral Sea is only one example of this.

The lesson, in my view is that socialism is a necessary basis for saving the planet, but it is not sufficient — we must also learn from and be committed to the best findings and proposals of ecology and earth system science. That’s why I and others call ourselves ecosocialists, recognizing that these two dimensions, socialism and ecology, must not be separated. There can be no true ecological revolution that is not socialist; no true socialist revolution that is not ecological.