The authors’ command of ecology is not limited to Marx’s concept of metabolic rift. They lay out the facts of the eco-crisis and potential cures, minus cant and jargon. 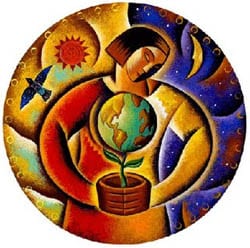 A book for a future society of buen vivir, or living well, with nature and other people? Yes.

How to achieve sustainability with humanity and the planet? Start with context and vision to transcend the status quo of bio-sphere destruction.

Reform is a part of the revolutionary process, according to the authors. It is not an either-or binary.

The vision thing matters when it comes to the false consciousness of blaming other people for the system’s baked-in flaws. Dividing the working class to weaken it is elites’ go-to tactic.

We see that now. Look no further than President Trump directing whites’ class resentment against Mexicans and Muslims.

Memo to the Democratic Party. Move progressively or empower neo-fascism, a product of neoliberalism.

In Magdoff and Williams’ view, “systemic environmental and social problems are caused by and are intrinsic to capitalism.” To this end, they review the science and history of horticultural societies and climactic changes.

Ideas matter. “If we can’t even imagine a different way of interacting with one another,” write Magdoff and Williams, “the economy, and the resources we use and depend upon, then the struggle for a just and ecologically sound world recedes into utopian fantasy.”

How? In the final of the book’s four parts, the authors see nascent revolutionary stirrings such as Black Lives and the Standing Rock resistance against the Dakota Access pipeline as a revolutionary way forward.

De-personalizing social relations in an era of identity politics run amuck is on our to-do list of how to get to a more ecologically balanced way of living and working. About 40% of the book unpacks the causes and outcomes of our socio-economic order.

Magdoff and Williams contribute to a growing body of eco-socialist books. Two of note are The Ecological Rift: Capitalism’s War on the Earth (2010) and Facing the Anthropocene: Fossil Capitalism and the Crisis of the Earth System (2016).

To buttress the case that post-capitalist alternatives are possible, the authors share examples from nature and history to help us to grasp competition and division are peculiar to capitalism. The authors’ command of the science of ecology is not limited to Marx’s concept of capitalism causing a rift in the human metabolism with the earth.

The book’s second part explores the obstacles to creating an eco-society. The authors examine the ideas underpinning the rule of capital over people, e.g., that oppression and exploitation along the color, ethnic and gender lines are hard-wired into human nature.

The authors’ voice is measured. They lay out the facts of the eco-crisis and potential cures, minus cant and jargon.

This is no mean feat, given the current bleakness and darkness of the present moment. If anything, Magdoff and Williams understate ruling elites’ capacity to co-opt and oppress systemic resistance.

They write: “Ultimately, we need to create a movement large and formidable enough to challenge the entire power structure of capitalism, one that is capable of winning the army and large portions of the population that up to that point had been passive, ambivalent, or even antagonistic.” Such a herculean task merits extended attention and discussion, to which Creating an Ecological Society contributes.

First published in The Progressive Populist and reposted with the author’s permission. Seth Sandronsky is a journalist and member of the Pacific Media Workers Guild.