For these politicians, it’s a matter of political principle: Earth’s ability to support life must be undermined as quickly and thoroughly as possible.

For these politicians, it’s a matter of political principle: Earth’s ability to support life must be undermined as quickly and thoroughly as possible. 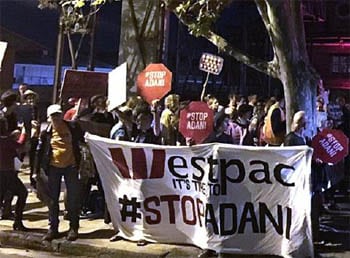 Say what you will about the members of the Coalition government, but they have principles and they stick to them. In particular, the principle of working to destroy this godforsaken Hellhole of a planet as rapidly as humanly possible.

And so when, amid a growing campaign against Adani’s proposed Carmichael coalmine in Queensland, Westpac ruled out funding the mega-mine project, federal resources minister Matt Canavan did not hold back.

“This stinks to high heaven,” Canavan railed, presumably in sheer horror at the prospect of a project to burn huge quantities of fossil fuels and worsen escalating climate change that is threatening humanity with total catastrophe in coming years. “It does beggar belief how they can continue to call themselves Australian,” Canavan insisted.

This suggests the new citizenship test on Australian values will include the question: “What is your attitude to Australia’s previous natural wonder, the Great Barrier Reef?”, with the correct answer being “KILL IT! KILL IT NOW! QUICK!”

It is not just the prospect of potentially putting the human race out of its misery before the century’s end that excites the government. Defenders of the project like to point to the potential 10,000 jobs the mega-mine could create.

Because if there is one thing the now-ended mining boom has taught us, it is the answer to sustainable growth in jobs is to just let large multinational corporations rip out your resources unhindered.

Of course words are cheap, but ultra-destructive coalmines aren’t. We know how serious the federal government is about killing off the ailing Great Barrier Reef once and for all by the fact it is willing to cough up $1 billion in taxpayer funds to subsidise the project. It is not easy to find that sort of cash, which is why it proposes gutting Medicare, cutting single parent payments and reducing university funding to levels so low the resulting fee hikes will leave only residents of Double Bay or Toorak able to attend.

But let no cynic suggest this is really about money. This is not simply about the profit margins of the large corporations the government serves. This is a moral issue.

Deputy Prime Minister Barnaby Joyce explained this clearly on ABC’s Q&A on May 1 in making the case for expanding coal mining: “We have to realize we have a moral responsibility to other people in other nations to keep their lights on.”

Because when you think about concern for the fate of “other people in other nations”, the first thing that comes to mind is this government. That is why it has so savagely slashed the foreign aid budget, made it harder for foreigners to become citizens and locks up desperate people who come here as refugees in isolated prison camps in horrific conditions causing widespread self-harm.

All hope is not lost on the prospect of building the mega-mine project that will escalate a growing ecoholocaust. The Commonwealth Bank is yet to rule out funding Adani.

All who support the principle of undermining the capacity of the planet to sustain life in return for higher corporate profits and fewer jobs than provided by the threatened tourism industry should take heed of Canavan’s call for a boycott of Westpac. Take a stand for the lack of a future.