‘Like latter-day wizardry, corporate risk calculations suggest that markets and capital can, not only control the natural world, but somehow anticipate it’

‘Like latter-day wizardry, corporate risk calculations suggest that markets and capital can, not only control the natural world, but somehow anticipate it’ 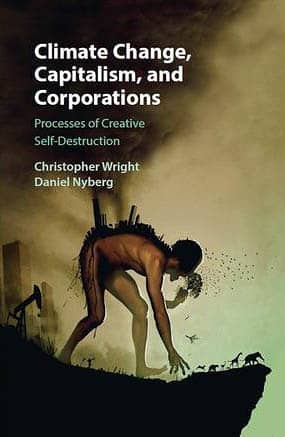 by Christopher Wright  and Daniel Nyberg

Climate change poses a major threat to the future of humanity. Extreme weather, rising seas, ocean acidification and biodiversity collapse will undermine many of the systems on which we depend. We’ve even seen a recent example of this, with South Australia’s storm and blackout illustrating the vulnerability of our society to extreme weather.

Risk has become a central construct for how businesses should respond to climate change. As Hank Paulson, former Secretary of the US Treasury has argued, “climate change is not only a risk to the environment but it is the single biggest risk that exists to the economy today”.

The G20 is currently investigating how companies are exposed to climate risk, and how they disclose that risk to consumers.

However, instead of dealing with the larger problem of rapid and systemic decarbonisation, most businesses construct climate risk solely through the lens of profitability and market opportunity.

As part of a broader study into corporations and the climate crisis, we recently published an article in the journal Organization exploring how corporations have responded to climate risks.

Risk management has become a central feature of corporate language. Risk was translated into management in the 1990s after catastrophes and scandals such as the collapse of Barings Bank and the Brent Spar controversy at Shell.

The core assumption here is that risk is somewhere outside the company: it just has to be found and captured. The perception is that corporations are exposed to a variety of objective risks that can be managed through rational decision-making. This might include cost–benefit analysis based on probabilities and consequences. The aim is to make uncertainty manageable.

How companies construct risk involves a number of processes. In relation to climate change, companies seek to break up a complex concept into smaller parts that can be addressed by specific corporate practices and policies. These include:

To address these risks, companies seek to minimize the threats and maximize the opportunities. These include practices such as scenario planning and retrofitting infrastructure for extreme weather events, engaging politically and lobbying for better regulation, scanning the market for competitive threats, investing in R&D for new “green” products, and actively marketing and branding themselves as “green” businesses.

However, for corporations to prosper from climate change, the risks associated with it have to be meaningful in a business sense. They have to be able to be valued in monetary terms. For instance, putting a price on carbon means emissions can be factored into business strategies, which then stimulate investments in “green” energy and technologies.

As one manager in a financial services organisation confided to us: “The easiest thing to do, is to go carbon trading. There’s a way to make money!”

These risk framings are then institutionalized through corporate roles and practices (such as pricing carbon internally, restructuring activities to identify new products and markets, and actively managing customer and employee perceptions of corporate activities).

As another sustainability manager outlined: “My job is to keep their risk as low as possible … from regulatory right through to perception and reputation.”

But risk is more complex than that

However, these risk constructions often fail to fully account for the physical and political complexities of climate change.

In insurance for example, the reliance on historical climate models often fails to account for new and extreme weather events. As one senior manager explained:

“I mean most people didn’t think it hailed in Melbourne until last year (2010). There was another one in Perth, you know it was classic. It was known in the industry as “unmodelled risk”, which means there isn’t a detailed model of the risk that you can use to price it. Perth – hail in Perth was unknown. I mean completely unknown.”

For instance, despite the claims by financial institutions that they are “sustainability” leaders by reducing their carbon emissions and encouraging corporate clients to adopt more climate friendly practices, NGOs and critics have emphasized how these statements conflict with continued investments in fossil-fuel based energy projects.

This has culminated in a global movement of fossil-fuel divestment which undermines the social legitimacy of these investments.

Corporate risk constructions also exclude non-market understandings which underpin personal and social identity. For example, energy companies which promote coal-seam gas as a cleaner energy source have been caught off guard by vehement political battles with agricultural landholders and communities objecting to fracking as a harmful activity. Here, community and environmental concerns collide with corporate risk calculations, which focus on profitability and the opportunity of increasing commodity prices.

By ignoring these factors, and constructing risk in a way that maximizes opportunities and profit, corporations emphasize a vision of human mastery over nature. Like latter-day wizardry, corporate risk calculations suggest that markets and capital can, not only control the natural world, but somehow anticipate it.

These risk calculations downplay the need for radical change and emphasize “business as usual”. Ironically, the devastating environmental change that is supposedly being anticipated and managed by corporate risk management is locked in to an ever more terrifying degree.