Renewable energy sources may have low CO2 emissions at the point of use, but the mines that make the technology possible are often environmentally destructive

Renewable energy sources may have low CO2 emissions at the point of use, but the mines that make the technology possible are often environmentally destructive 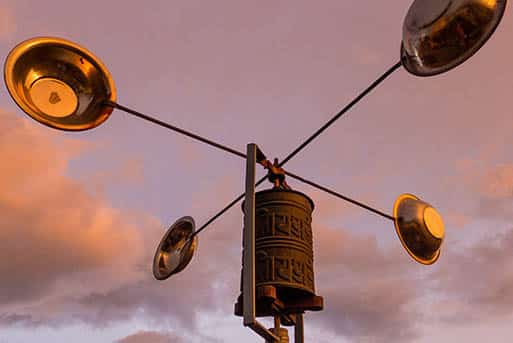 “Africa is at the sharp end of the consequences of climate change, despite only being responsible for 4% of global greenhouse gas emissions, for which developed countries have historically been responsible. The rest of the world must settle this ecological debt to the African continent.”

Surprising though it may seem, these are not the words of an environmental NGO, but rather those of French President François Hollande during the COP 21 climate change conference in Paris.

What is his proposal for reducing the ecological debt to Africa? Certainly not the cancellation of completely illegitimate government debt, nor halting Françafrique (France’s post-colonial approach to Africa) and its pillaging of the continent’s resources. His suggestion – funding for renewable energy – is nothing new.

Yet the issue is rarely raised that these renewable energies have a heavy environmental impact when the total production chain is taken into account – particularly, the stage of mining the metals needed in the production of these forms of energy. Renewable energy sources are often advocated for their low CO2 emissions at point of use, but the overall product lifecycle is often forgotten about completely. In addition, many chemical products are needed in mining operations, leading to severe long-term pollution. It is also worth noting that the process of extracting, transporting, and refining minerals accounts for 8 to 10% of global primary energy consumption. Furthermore, these steps rely on metals whose reserves – far from being infinite – are in decline and we should not forget that, for the most part, these reserves are mined in poor regions, with no regard for human rights and without making a fair contribution to the countries in which these resources are being exploited.

For example, 10% of global copper reserves, 25% of tantalum reserves, 30% of cobalt reserves, and 75% of coltan reserves are held in the Democratic Republic of Congo (DRC). It also has significant reserves of gold, diamonds, tungsten, and tin. The role that the exploitation of these mineral resources plays in the conflicts affecting the DRC – and the east of the country in particular – is now common knowledge. Bolivia has the largest concentration of lithium reserves in the world, a mineral which is particularly in demand for electric cars. In his article Dans l’ombre de la Pachamama (Manière de voir, December 2015), Renaud Lambert explains how the Bolivian government gave authorization to the Bolloré Group to exploit the country’s reserves, provided that they worked “in harmony with Pachamama..

As the era of scarce and expensive oil looms near, the same is now true for metals: finite resources which are increasingly expensive to extract. The unusually low price of oil and metals since the end of 2014 hides the fact that the extraction of these resources is becoming more and more restrictive. The calculation of energy produced versus energy invested – the energy returned on energy invested (EROEI) – highlights this irrefutable problem. A century ago, a single unit of energy was required to produce 100 units of energy; oil in the US had an EROEI of 100 to 1. In 1990, the EROEI was 35:1 and it is currently 11:1. The average EROEI for conventional oil production at a global level lies between 10:1 and 20:1. For shale oil, it is 5:1. With a benefit ratio between 1:1 and 1.6:1, the return for biofuels is almost zero.

As Pablo Servigne says, “All of these EROEIs are not only decline, but in accelerated decline.” The EROEI for energy invested in renewables is also known to be very low, with a ratio of 18:1 for wind but more importantly 1. 6:1 for concentrated solar power (large solar plants in the desert) and 2. 5:1 for photovoltaic power in Spain.

How does one explain such a low rate of energy return? Both metal and energy reserves are finite. Based on annual production rates, there are between 10 and 20 years’ worth remaining for certain elements such as antimony, zinc, tin, and indium. Most reserves have between 30 and 60 years left, but, as with oil, “the problems are arising earlier than the theoretical number of years left, as every finite resource is reaching peak production levels,” says Philippe Bihouix in his book Quel futur pour les métaux.

Complex infrastructures and metallic resources are essential for recovering metals and the energy needed for the production of renewable energy, not forgetting the fact that the rate of recycling remains low despite the promises of a circular economy. As William Sacher, co-author of Noir Canada and Paradis Sous Terre explains,

“The mining industry faces a huge paradox. On the one hand, the major mineral deposits are running out. On the other hand, the growth in demand is still getting stronger. This contradiction obliges the industry to adopt a modern mega-mining model, involving the use of enormous quantities of chemical reactants, some of which are highly toxic, and the generation of enormous amounts of waste. The pollution produced often poses a danger for decades and even centuries to come. The social, economic, political, and even cultural or psychological impacts are linked with the mega-mining model.”

There are numerous false alternatives based on an increased use of new technologies. It is misleading for these technologies to be over-emphasized excessively considered, as factors in the reduction of the environmental footprint in one sector or another. These alternatives are implemented in scenarios which involve changing the energy model by favoring renewable energy to the detriment of fossil fuels. However, these alternatives are based on the idea of deployment on an industrial scale, which, while involving renewable energy, have no connection with the real world and are not democratic, due to the huge scale of their operations. They involve the destruction of inhabited areas and the pollution of both water courses and large areas of land.

Extracting fossil fuels which are less and less accessible requires an increased need for metals and investment. The extraction of these metals, which are less and less concentrated, requires more and more fossil fuels. Exploiting renewable energies using photovoltaic panels or wind turbines requires greater use of rare metals such as neodymium, indium, selenium, or tellurium. The problem of “more energy required for less concentrated metals, more metals needed for less affordable energy” is an unprecedented challenge for a highly complex and interconnected system which will have to face up to these high levels of investment. Reserves of silver, antimony (used in electronic devices), and indium (used in photovoltaic cells and LCD screens) will run out in 20 years, as highlighted in a study by Philippe Bihouix.

Technologies which are often presented as solutions only serve to increase ecological debt and rates of extraction. The more “successful” these technologies are, the more demanding they are on rare and precious resources. Philippe Bihouix says that “new green technologies are generally based on new technologies and on less common metals, contributing to the complexity of products and so to recycling problems.”

What then are the viable alternatives? Bihouix talks about low tech and simple technology. Thus, it is possible to believe in the ability of renewable energy to localize energy production in the case of simple technologies (domestic solar energy or small wind turbines) but impossible in the case of large, modern, high-tech technologies. Other alternatives which take the problem of metal reserves into account could include de-automating services and favoring the use of renewable and recyclable materials, as well as objects that can be repaired. But first of all, we must establish what is needed and then consider what to produce, why, and how.

Translated by the Committee for the Abolition of Illegitimate Debt (CADTM) from the magazine Les Autres Voix de la Planète,