Before the word ‘ecosocialism’ existed, the co-editor of Monthly Review was discussing ecosocialist ideas. 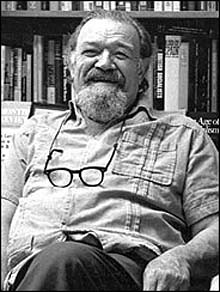 Before the word ‘ecosocialism’ existed, the co-editor of Monthly Review was discussing ecosocialist ideas.

Our friends at Monthly Review have discovered a previously unpublished paper by Harry Magdoff, former co-editor of MR and author of such important works of Marxist analysis as The Age of Imperialism and Imperialism without Colonies.

It appears to be the edited transcript of a talk Magdoff gave in 1971 or 1972. Readers of Climate & Capitalism will be particularly interested in Magdoff’s insightful comments on capitalism’s impact on the environment, long before most socialists and greens expressed such views.

For example, on automobiles:

“In any sort of rational society, call it capitalist, socialist, anarchist, feudal, whatever you want to call it, the notion of having one or two people consuming, using up several tons of steel is impossible. When I say several tons, it’s not only the steel or metal that is in the car itself but all of the metal that had to be scraped off in the process and not always recycled, that was used in order to be able to get from one block to ten blocks away or twenty blocks away or even twenty miles away. The amount of oil that’s consumed, what’s done to the air, what’s done to human beings, to their nerves—it’s just impossible, it’s incredible, it’s stupid, it’s irrational, and it cannot continue.

“Nor will other countries in the world be able to continue if they follow the American path, which they are bound to do without some drastic changes in their way of life and in their way of thinking. It is an impossible development in terms of utilization of resources. …

“Since the beginning of the twentieth century the economy has developed in such a way, with the price system, the wage system, the entire structure of a way of life in addition to housing, city structure has been such that you have to have the automobile. If you remain within the context of the bookkeeping of the market economy, the pricing system, the wage system that has been established over the years, then the only way to continue would be to continue building an automobile economy. In order to change it you have to overhaul everything about our economy. …

“You’ll have to redesign your cities. But you cannot redesign your cities without taking into account land values. Land values have no logical meaning other than business speculative purposes. You have to be able to reorder your housing, you have to be able to reconstruct your cities, you have to develop an industry, a new kind of industry that will supply mass transportation, that will solve many of the problems of transportation; you have to restructure your society from a purely technical standpoint, certainly not an easy thing to do and certainly not something that we could sit down and do overnight.

“If you are going to overcome the sickness of operating and developing along the lines that we have been developing, then just eliminating the profit motive doesn’t change it because it’s not merely the profit motive, it’s the accounting, it’s the bookkeeping, it’s the pricing system and the entire structure of housing and manufacturing that has developed. I’m using automobiles because it’s the classic illustration, the best, everything is contained in it, but you can go down the line to all sorts of other industries and find the same type of problem.”

Read the entire talk, including his answers to audience questions, on the Monthly Review website.