Forget the ‘tragedy of the commons.’ The real cause of environmental crises is a system that commodifies nature and values profit above life itself

by Stefano B. Longo and Brett Clark

We live in an era of ecological crisis, which is a direct result of human actions. Natural scientists have been debating whether the current historical epoch should be called the Anthropocene, in order to mark the period in which human activities became the primary driver of global ecological change.[1]

Initially, it was proposed that this new epoch, corresponding with the rise of modern capitalist and industrial development, began in the eighteenth century. The growth imperative of capitalism, as well as other socio-cultural changes, is a primary factor generating major environmental problems that culminate in ecological crisis.[2]

It has become increasingly clear that humans face an existential crisis. The environmental writer and activist Bill McKibben explains:

“Earth has changed in profound ways, ways that have already taken us out of the sweet spot where humans so long thrived…. The world hasn’t ended, but the world as we know it has—even if we don’t quite know it yet. We imagine we still live back on that old planet, that the disturbances we see around us are the old random and freakish kind. But they’re not. It’s a different place. A different planet…. This is one of those rare moments, the start of a change far larger and more thoroughgoing than anything we can read in the records of man, on a par with the biggest dangers we can read in the records of rock and ice.”[3] 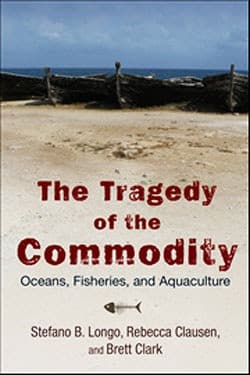 This essay is based on the new book The Tragedy of the Commodity: Oceans Fisheries and Aquaculture by Stefano B. Longo, Rebecca Clausen, and Brett Clark, (Rutgers University Press 2015).

Many modern ecological problems are referred to as a tragedy of the commons, a concept developed by Garrett Hardin in the 1960s to describe the overexploitation or despoliation of natural resources.[4] We contend that they are actually associated with the tragedy of the commodity. While an obvious play on Hardin’s concept, this approach offers, we argue, a much more comprehensive and historically appropriate analysis of the drivers of ecological degradation.

The classic illustration of the tragedy of the commons used by Hardin involved the dynamic of herders and their livestock. He claimed that each herder will act primarily in his or her own interest by adding additional livestock to common grazing land when it served to increase individual benefits. Therefore, Hardin argued, each herder would attempt to acquire the benefits offered by the commons, while socializing the costs to all. For example, by adding an extra animal to the pasture the herder reaps all the benefit, but pays only a fraction of the environmental costs, such as depletion of the grazing land. Each actor, motivated by individual maximization of benefits, increasingly introduces grazing animals into a finite system of resources, leading to the tragic destruction of the land. With this Hardin concludes “freedom in commons brings ruin to all.”[5] For Hardin, and many others who have adopted this perspective, expanding private property is offered as a leading policy solution for avoiding ecological tragedies.[6]

The tragedy of the commons theory explains the behaviors of individual actors in given social circumstances. However, it does not address how historical conditions and the socioeconomic system influence individual actors. In other words, the social context is simply taken for granted. The existing social conditions and relations are regarded as ever-present, universal, and permanent. The model neglects to recognize that human interactions and exchanges with ecological systems change through time and are regulated by particular institutional conditions.

Once examined from a sociological perspective, the tragedy of the commons theory is simplistic and one-sided in that it attempts to explain human social behavior, or human agency, without a thorough understanding of the historical social organization.[7] This simplification results in a mystification of the modern systems of production and consumption and the historically specific ecosystem effects.

In contrast, the tragedy of the commodity approach emphasizes the role of the growth imperative of capitalism and commodification in producing the institutional rules by which nature and, for example, the commons are governed and historically transformed. Ecological systems are never altogether free of social influences. Rather, they are shaped by social conditions including norms, traditions, economic rules, the organization of labor, politico-legal arrangements, etc.[8] The social actions that have emerged with capitalist development are dominated by what Adam Smith called “the propensity to truck, barter, and exchange,” matched with a crude utilitarianism, where individuals follow pure self-interest without social constraint. Unfortunately, these actions are often incorrectly ascribed to innate human behavior.[9]

Thus, what might appear to the casual observer to be a system governed by base greed and human instinct is in fact largely directed by the drive for capital accumulation and what Immanuel Wallerstein called the progressive “commodification of everything.”[10] Among other outcomes, the commodification process results in a social metabolic order — socio-ecological interchanges and interrelationships — that produces unsustainable social and ecological consequences.

In a society organized around the logic of capital, human activities tend to be directed toward the production of commodities. That is, capitalism can be understood in a broad sense as a system of generalized commodity production. The institutional arrangements result in particular social arrangements and generate distinct types of human social action. The commodity serves as a basic unit to understand the larger culture-nature relations and capitalism itself. It is a base element of capitalist market processes.

Nature is an essential source of use value, or the qualitative usefulness of things. For example, Earth’s biogeochemical systems provide the conditions and means that allow for the production of food. Karl Marx emphasized that under capitalist relations, nature was seen as a free gift; it was not considered as part of wealth.[11] He famously explained this in terms of a “general formula for capital”—whereby capital is understood as the “continuous transformation of capital-as-money into capital-as-commodities, followed by a retransformation of capital-as-commodities into capital-as-more-money.”[12] Even though use value expresses the useful properties of an item or service, it is exchange value, or market value, which knows only quantitative increase and drives capitalist economic activity.

Money is put into circulation in order to return money, a quantity for a quantity, “its driving and motivating force is therefore exchange-value.”[13] Thus, capital constantly expands into more capital, motivated by surplus value or profits, the generation of which is “the absolute law of this mode of production.”[14] Under this logic, money dominates the organization of social and natural relationships. Addressing the pervasiveness of this logic, Karl Polanyi explained, “All transactions are turned into money transactions.”[15] The emergence of an all-encompassing, self-regulating, market disembedded human practical activity from its foundation in the broader sociocultural and environmental conditions. Market activity directed by commodity production for the endless accumulation of capital acquired the irresistible impetus of a “process of nature.”[16]

Accordingly, the organization of production and consumption activities is fundamentally transformed from the exchange of qualities into the exchange of quantities. Alienation from each other and nature increases, as qualitative relations of production and the universal metabolism of nature are subsumed under the quantitative growth imperative of capital and a culture of quantity.[17] This fundamental tension between the necessity of quantitative expansion to sustain the economic relations and the qualitatively unsustainable ecological consequences marks the defining characteristic of the modern ecological crisis and the tragedy of the commodity.

Capital tends to simplify natural processes and ecosystems, imposing a division of nature to increase economic efficiency. It directs the life cycles of plants and animals to the economic cycle of exchange. Qualitative social relations — such as subsistence use within an ecosystem — are not part of the capitalist accounting system and can suffer various forms of destruction as a result. Use values, as the qualitative means for meeting the needs of life, are limited given biophysical properties. In contrast, there are no limits to quantitative measures of wealth. In other words, growing returns on investment have no end, but real human needs are confined to definite and knowable material limits.

The ceaseless drive for accumulation inherent in capitalist commodity production speeds up the social metabolism. It results in a faster depletion of resources, stemming from increasing demands for materials and throughput, and the generation of ever-more waste. It degrades the conditions that support resilient ecosystems. The capitalist system creates numerous contradictions between nature and commodities; it progressively deepens and creates ecological rifts.[18]

The way forward, toward a more sustainable world, requires radical changes in the social conditions that have historically shaped the productive and consumption system of capitalism. Collective action must take back public commons and put them in control of the people who most closely interact with them and depend on them for community well-being. In order to be successful, these actions must (in effect) de-commodify nature.

Commons must be decentralized and democratized, rather than, in the standard neoliberal view, privatized. Farmland and fisheries must be socially organized to advance nourishment and health. Forests must be valued as reserves of biodiversity, clean water, and culture. Economic activities must be embedded within society as a whole and the universal metabolism of the biophysical world, allowing for the continuation of reproductive processes, nutrient cycles, and energy flows that support all life.

Human society must transcend the logic of capital, creating a new social metabolic order that increases the quality of life and enhances the potential for ecological flourishing and universal human freedom.

Recently, Pope Francis highlighted what we have been calling the tragedy of the commodity. In his highly publicized Encyclical on the environment, he mentions the “tragic effects of environmental degradation.” He goes on to say:

“Where profits alone count, there can be no thinking about the rhythms of nature, its phases of decay and regeneration, or the complexity of ecosystems which may be gravely upset by human intervention. Moreover, biodiversity is considered at most a deposit of economic resources available for exploitation, with no serious thought for the real value of things, their significance for persons and cultures, or the concerns and needs of the poor.”[19]

He contends that a “cultural revolution” is required to address ecological crisis.

Interestingly, Pope Francis limited his suggested response to a cultural revolution when it is clear throughout the document that he is describing a political-economic problem. We agree that a revolutionary approach is necessary for addressing the ecological crisis. Nothing short will be adequate for challenging the tragedy of the commodity.

Republished from Counterpunch,  with permission from the authors.

[6]. Theorists of the tragedy of the commons also acknowledge the potential for state action and management as alternative arrangements for promoting resource conservation. See Elinor Ostrom et al., The Drama of the Commons (Washington, DC: National Academies Press, 2002).