John Bellamy Foster reviews Johan Rockström’s call for a ‘Great Transition’ that combines the goal of prosperity for all with a stable and resilient planet, based on nine critical planetary boundaries. 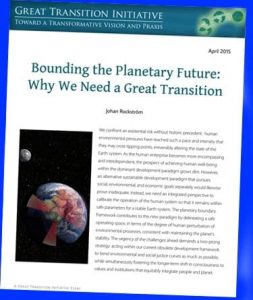 This week, the Great Transition Initiative published an important new essay by the Executive  Director of the Stockholm Resilience Centre. In Bounding the Planetary Future: Why We Need a Great Transition, Johan Rockström proposes a radical strategy to avoid catastrophic environmental change.  “Our grand challenge in the Anthropocene,” he writes, is to combine the goal of prosperity for all with a stable and resilient planet.”

His approach, based on the Planetary Boundaries approach introduced in 2009 and updated earlier this year, posits a two-track approach: a short-term effort to “nudge our dangerous trajectory away from the most immediate risks,” and a longer-term effort to “reconnect world development with a resilient earth.”

John Bellamy Foster, editor of Monthly Review and author of many books on Marxist ecology, was asked to comment on the paper before publication. His review has been posted on the GTI website alongside Johan Rockström’s essay, and he has kindly given us permission to repost it here.

Commentary on
BOUNDING THE PLANETARY FUTURE:
WHY WE NEED A GREAT TRANSITION

In the face of today’s planetary emergency, Johan Rockström’s Bounding the Planetary Future: Why We Need a Great Transition represents an extraordinary attempt at synthesis, seeking to bridge the gap between natural science and social science in this area, while setting the stage for needed social transformations. He brings together the planetary boundaries, Anthropocene, Great Acceleration, and Great Transition discussions, establishing a common ground upon which to develop a unified social response.

Two things stand out for me in reading Rockström’s article. The first is his sheer courage in forthrightly connecting the new, more developed planetary boundaries model to the question of a Great Transition. The second is just how compelling his argument is in this respect. It was not until I was two-thirds through his paper that I found anything to disagree with, and even then, the area of disagreement was slight when compared with that of agreement.

The planetary boundaries analysis, when it first appeared as a formal model in 2009, was already linked to the notions of the Anthropocene and the Great Acceleration. But each of these ideas arose independently over a long period with many contributors, which helps explain the speed with which the formal model, developed primarily by Rockström, was widely accepted. Here, I will simply relate some of the interconnections with my own work in this regard, as a way of approaching the historic significance of Rockström’s present analysis, as well as the critical questions it raises.

Immediately recognizing the importance of the planetary boundaries framework on its first appearance in 2009, my co-authors, Brett Clark and Richard York, and I incorporated a systematic treatment of it into the opening pages of our 2010 book The Ecological Rift. There, we sought to connect the idea of planetary boundaries to that of “planetary rifts,” or a theory of ecological crisis.

Planetary rifts, we suggested, could be associated with the crossing of the main boundaries or thresholds of the Earth system and the rupturing of critical biogeochemical cycles. They also represented disjunctures between (alienated) socio-productive systems and natural conditions. In terms of the updated planetary boundaries framework, planetary rifts involve leaving the green zone associated with Holocene conditions and entering the yellow zone of dangerous uncertainty, with the growing threat of crossing over into the red zone of very dangerous or catastrophic change, characterized by planetary tipping points.

The notion of a rift in the “social metabolism” connecting nature and society is one that goes back to the nineteenth century in the work Justus von Liebig and Karl Marx (in what is known as his theory of metabolic rift), embodying a logic consistent with later ecological systems theory. Marina Fischer-Kowalski draws on Marx’s notion of social metabolism in her analysis of metabolic flows, on which Rockström relies in his paper.

In my book The Vulnerable Planet, the second edition of which appeared in 1999, I referred to the “acceleration of history” after 1945, following the first atomic test and the beginning of the “synthetic age.” This periodization also extended back to the Industrial Revolution and the beginning of the burning of fossil fuels for industrial purposes.

Hence, the two crucial developments in the transformation of the human relation to the environment in modern times were 1760 and 1945. The human relation to nature had changed fundamentally. Humanity was now able through the growing scale of its actions to “increasingly rival nature itself with respect to the fundamental ecological cycles of the planet,” with all sorts of potentially dire, long-term consequences.

Neither the basic concept of the Anthropocene nor the Great Acceleration was therefore entirely new in 2009. They related to the kinds of historical periodization many of us were developing. But the analysis that Rockström did so much to develop presented such ideas in a stronger, more definitive way, with the imprimatur of science.

On the other side of the Rockström dialectic, I concluded in 2005 that the Global Scenario Group project (later to become the Great Transition Initiative) represented the most significant attempt thus far to chart out our possible futures in the face of the growing planetary crisis and the climate crisis in particular. My analysis of the Great Transition scenarios and what they taught us about potential futures was later incorporated into my 2009 book The Ecological Revolution.

All of this enabled me better to appreciate the historic, even epoch-making, significance of Rockström’s work, first with respect to the planetary boundaries framework (including the historical conceptions that lay behind it), and then, in this latest paper, in connecting that to the Great Transition discussion.

What I was not altogether prepared for, however, was just how deep his socioeconomic analysis would go. This is evident in his insistence on the need to move to a “steady-state economy,” à la Herman Daly (while also leaving room for poor countries to continue to develop — a concept not to be confused with that of crude economic growth [GDP] calculations).

There cannot be a global solution to the climate change problem, Rockström rightly insists, without first facing up to current global inequality, whereby some of the richer countries, like the United States, emit five times as much carbon into the atmosphere per capita as the poor countries.

Rockström goes on to insist (as Fred Magdoff and I did in our 2011 book, What Every Environmentalist Needs to Know About Capitalism) that the necessary changes — given the speed with which they must occur — require an explicit “two-track” approach:

It is only in relation to some of the concrete specifics of Rockström’s analysis, then, and not the framework as a whole, that I find myself in partial disagreement. He explains, following the IPCC, that the global carbon budget requires that we stay below a trillion metric tons of total carbon emitted into the atmosphere, and that at the present rate of emissions under business as usual this gives us only about a quarter-century before we will hit the trillion-ton mark — with the very real possibility then of irreversible, out-of-control, climate change.

Nevertheless, in proposing his “fast track pathway” of decarbonization, he states that we need to aim at reaching zero carbon by 2050 to 2070 — as if we had the luxury of this amount of time. It is true that by slowing down the rate of emissions now we can gain more space in which to operate, but, given the unprecedented risks that humanity is now facing, to target 2070 (or even 2050) is clearly not enough. It hardly captures the seriousness of our current global emergency, which requires that we seek a faster fast track than he envisages here.

The rub here of course is that a faster “fast track” to a zero carbon world economy than the one he proposes could not be driven entirely by new technology and the shift to alternative energy, i.e., ecological modernization, but would need to place greater emphasis on conservation, lifestyle change, the rapid shift to a steady-state economy (degrowth), and the massive reduction of waste. In fact, it would raise the question of social relations.

Put in a nutshell, even a two-track strategy would require quite radical changes in the direction of world sustainability in the first track, if were to have a reasonable hope of success.

Indeed, the enormity of the planetary boundaries emergency is partly disguised in the social or Great Transition part of Rockström’s argument since he considers only one of the nine planetary boundaries. Yet a number of the others (declining biodiversity, the disruption of the nitrogen and phosphorus cycles, and land cover change — not to mention the growing problems of freshwater shortages and ocean acidification) present dangers scarcely less ominous. What we need to do is address them all simultaneously and the system that constitutes their common cause. But to do so raises the ante considerably.

Other conundrums in Rockström’s analysis arise from his attempt to build on the status quo, and his reluctance to engage directly with issue of capitalism. There are more positive references to business and to markets in his proposed fast-track change than there are to people, movements, the state, and planning. Likewise, there is more emphasis on “ecological modernization” than ecological mobilization of the population.

Completely missing is any discussion of the role of the current structure of production and consumption in generating economic and ecological waste. (The United States today spends a trillion dollars each year on the military and well over a trillion dollars a year on marketing, simply urging people to buy more — and this is only the very beginning where ecological, economic, and social waste are concerned). The material potential for what Howard Odum called “a prosperous way down” is already to be found embedded in the irrationalities of the present system.

Still, all of these disagreements with Rockström’s argument, though vitally important, are secondary, in my view, because the real contribution of his paper is that of demonstrating that there is now before us a clear common ground to which we can and must move — taking into account both the natural-scientific and social-scientific realities.

That is, there are broad areas on which we should all be able to agree with the force of science, since the consequences otherwise are so dire. Moreover, the long-term reality tells us that we have to move towards more collective, more sustainable, more egalitarian societies.

Rockström himself takes us as far as he believes he can in this new initiative, outlining the need for a Great Transition, while stopping short of concrete proposals. Yet, if we can agree on the basic outlines that he has provided, a rational way forward for the world begins to emerge.

Reposted from GTI under a Creative Commons (CC BY-NC-ND 4.0) license.