Book Review: Peter Linebaugh documents the struggle for the commons, from medieval times to today, replete with tales of heroic resistance and murderous repression 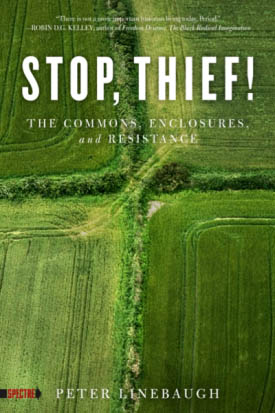 In 1968, the article “The Tragedy of the Commons” was published in Science magazine. The author of the article, Garret Hardin, whom critic Beryl Crowe called a “psychologically brave, but professionally foolhardy soul” in his response to Hardin’s piece the following year (also in Science), essentially argued that the commons could only be maintained in today’s world if it was privatized. He based his argument on an understanding of humanity that was Malthusian in its approach and assumed that the “rational” human is essentially a selfish human. Historian Peter Linebaugh published an essay titled “Enclosures from the Bottom Up” in which he labels Hardin’s argument “a brutal argument with an inhuman conclusion.”

That essay is but one of several that appears in Linebaugh’s 2014 book Stop, Thief!: The Commons, Enclosures, and Resistance. The essays are, when considered as a whole, a history of the struggle over the commons, from medieval times up to today. That struggle is a struggle between the rich and the commoner, the corporation and worker, the state and the people. It is a struggle replete with tales of heroic resistance and murderous repression. It is also a struggle which has probably never been sharper than today. Linebaugh examines this history, mixing stories of Luddite resistance with critical analysis of Karl Marx’s Das Kapital.

The book opens with a mention of the Occupy movement of 2011. Recalling that popular upsurge involving people collectively occupying space in cities across the globe (especially in the United States and Europe), Linebaugh suggests that the movement was a contradiction. The city, he writes, is a place of consumption, whereas the countryside is where food and other materials required for life are produced. It is in the latter where the commons have been historically maintained and fought over. Yet, the Occupy movement existed and flourished in urban spaces. He counters this perception by providing a history that shows the city to be originally the result of the enclosure of the commons. From this point on, Stop Thief! takes the reader on a ride through revolutions and reactions, colonialism and imperialism, Karl Marx and Tom Paine.

Over the course of that ride, the reader is presented with a reasoned and reasonable look at the phenomena that encroach on one’s life and liberty. He first introduces these culprits in an essay titled “The City and the Commons: A Story for Our Times.” The culprits are not only named by their mode of operation—land privatization, population control, criminalization of custom, and imprisonment—they are also named by those their parents gave them. This gang of four’s names are Jeremy Bentham, Arthur Young, Thomas Malthus, and Patrick Colquhoun and their mark on history and humanity remains. It is the story of this reality that fills the rest of Linebaugh’s text.

Summoning Marx’s discussion of what the landowners called the “theft of wood” from the forests they had their armies enclose; Linebaugh begins a fascinating discussion of capitalist accumulation and its ongoing role in today’s mechanics of neoliberalism. In his essay on the fictional hero Ned Ludd, the Luddites and Percy Bysshe Shelley, one is reminded that class suicide existed well before Amilcar Cabral or the Weather Underground.

In later chapters that include the French revolution and the American War for Independence, Linebaugh challenges the official narrative and asks why the Native Americans and African slaves are not included. In one chapter, the resistance to the enclosure of the Otmoor commons in Oxfordshire is described. This enclosure involved the privatization of the moors and the exclusion of sheep and cattle from grazing there. Peasants resisted with force and creative takeovers of the lands.

Incorporating feminist thought and Marxism, the role played by the division of labor that occurred in the wake of the industrial revolution is examined. According to Linebaugh, when women were relegated to the home they were, in essence, being enclosed away from the commons. If they did work, their job was likely to be performing one small task as part of the creation of a whole product. This alienation from the final product is in itself an enclosing of the mind, spirit and even the person. Of course, this alienation was felt by men in the factory, too. In shutting down the relationship to the completed product, the human being is/was being cut off from the commons.

Karl Marx expresses this aspect of modern labor more precisely than anyone before or since in his section on estranged labor in the Economic and Philosophical Manuscripts of 1844:

“What, then, constitutes the alienation of labor? First, the fact that labor is external to the worker, i.e., it does not belong to his intrinsic nature; that in his work, therefore, he does not affirm himself but denies himself, does not feel content but unhappy, does not develop freely his physical and mental energy but mortifies his body and ruins his mind. The worker therefore only feels himself outside his work, and in his work feels outside himself. He feels at home when he is not working, and when he is working he does not feel at home.”

Like Marx, Linebaugh draws the connection between the privatization of property and the estrangement of labor; the enclosure of the commons/common good and the alienation of humans from their work and from each other. Stop Thief! is simultaneously a look at the history of this process through a series of essays discussing people and events important to it and a discussion of its meaning for the present. Linebaugh blends the tales of the common man and woman, the poet and artist, and the economist and political scientist into prose that is poetic in approach and a delight to digest. One cannot help but learn from the lessons herein.

Ron Jacobs is the author of a series of crime novels called The Seventies Series.  All the Sinners, Saints, is the third novel in the series. He is also the author of  The Way the Wind Blew: a History of the Weather Underground.  This review is reposted from Counterpunch, with his permission.