The so-called ‘pause’ in the rate of global warming is false and distracting. It is a politically engineered excuse to avoid taking action on climate change.

Dana Nuccitelli is an environmental scientist and climate blogger for Skeptical Science and The Guardian. He is author of the recent book Climatology versus Pseudoscience: Exposing the Failed Predictions of Global Warming Skeptics.

Michael E. Mann is Distinguished Professor of Meteorology at Penn State University. He is author of the book The Hockey Stick and the Climate Wars. 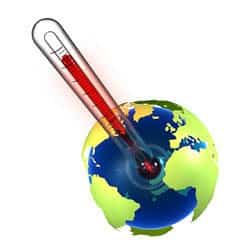 by Dana Nuccitelli and Michael Mann

Over the past 17 years, the Earth has warmed rapidly, accumulating energy at a rate equivalent to more than four atomic bomb detonations per second. That’s over 2 billion atomic bombs worth of heat built up on our planet since 1998.

As discussed in a new book by one of us (Dana Nuccitelli) Climatology versus Pseudoscience, research has shown that much of the heat buildup during that time was deposited in the deep layers of the Earth’s oceans, temporarily keeping it from the surface.

A new article co-authored by the other of us (Michael Mann), shows that natural ocean oscillations have recently acted to temporarily slow the warming of the Earth’s surface temperatures, in combination with a relatively quiet sun, and active volcanoes.

Despite this temporary masking of some of the surface warming, 2005, 2010, and 2014 each set records for global surface temperature, and 2015 is thus far on pace to break the record once again. Such is the profound nature of human-caused global warming, that it has overcome these many short-term natural cooling influences.

Yet a purported global warming ‘pause’ (more aptly named the ‘faux pause’) is often used as an excuse by those who oppose taking action to curb climate change. For example, Republican Senator and US presidential candidate Ted Cruz recently said on American TV:

“Many of the alarmists on global warming, they’ve got a problem because the science doesn’t back them up. In particular, satellite data demonstrate for the last 17 years, there’s been zero warming.”

This assertion is problematic for several reasons. First of all, it is wrong: the satellite data clearly show ongoing warming over the past two decades.

Secondly, the satellite data in question only estimate the temperature of the atmosphere above Earth’s surface. We, and most other living things, reside on Earth’s surface, and the data tell us that surface warming continues unabated.

Finally, warming of the atmosphere accounts for only about two per cent of overall global warming; more than 90 per cent goes into heating of the surface and the oceans. That heating contributes to the melting of the ice sheets, and the acceleration of global sea level rise.

The faux pause has nonetheless been used by political partisans like Senator Cruz to cast doubt on the overwhelming scientific consensus that humans are causing rapid global warming, simply because they find the political implications of that scientific reality inconvenient — to their ideological views and the views of the special interests who fund their campaigns.

This is especially troubling given that climate change poses a variety of significant risks to Earth’s species, including humans, and the best way to mitigate those risks is to reduce our reliance on the fossil fuels that are causing them. However, there are powerful vested interests pressuring governments to instead maintain the fossil fuel status quo.

For example, in the short-term, Australia and its coal industry benefit economically by exporting coal to developing nations. While the US, UK, and France have tried to cut export subsidies for coal stations in third world countries and instead shift support toward low-carbon energy sources, the Abbott government has opposed those moves. It has has also asked Bjorn Lomborg to help launch the Australian Department of Foreign Affairs and Trade’s development innovation hub, which is intended to “find better ways to help poorer countries.”

Lomborg has argued that the faux pause implies “that the real challenge of global warming has been exaggerated.” He is expected to suggest that developing nations should view climate change as a low priority.

The unfortunate reality is that third world countries tend to be the most vulnerable to the impacts of climate change. Lomborg’s rosy outlook on climate change, which is largely based on the faux pause, conveniently supports the Australian government’s preference for maintaining its coal export status quo.

While explaining the various potential causes of the slowdown in surface warming has been an interesting academic exercise, there has in fact been no pause in the overall warming of our planet. Indeed, as one of us (Michael Mann) has noted recently, the ‘false pause’ has likely contributed to false complacency, for it may have lulled some into thinking that climate change has somehow lessened as the threat, when the reality is that many of the most detrimental impacts of climate change — melting of ice, rising of sea level, and potentially the slowdown of the critical North Atlantic ocean ‘conveyor belt’ — have, if anything, proceeded even faster than climate models had predicted.

We must not allow ideologically-driven political partisans to continue to use the faux pause as justification for their faux pas when it comes to talking about (and dealing with) the existential threat of human-caused climate change.

From the ABC [Australia] Opinion blog