Climate is defined as the 30-year weather average. The past 3 decades show that the new normal is systematically rising temperatures, not the stability of the past

If you’re younger than 30, you’ve never experienced a month in which the average surface temperature of the Earth was below average.

Each month, the US National Climatic Data Center calculates Earth’s average surface temperature using temperature measurements that cover the Earth’s surface. Then, another average is calculated for each month of the year for the twentieth century, 1901-2000. For each month, this gives one number representative of the entire century. Subtract this overall 1900s monthly average – which for February is 53.9F (12.1C) – from each individual month’s temperature and you’ve got the anomaly: that is, the difference from the average.

The last month that was at or below that 1900s average was February 1985. Ronald Reagan had just started his second presidential term and Foreigner had the number one single with “I want to know what love is.”

These temperature observations make it clear the new normal will be systematically rising temperatures, not the stability of the last 100 years. The traditional definition of climate is the 30-year average of weather. The fact that – once the official records are in for February 2015 – it will have been 30 years since a month was below average is an important measure that the climate has changed. 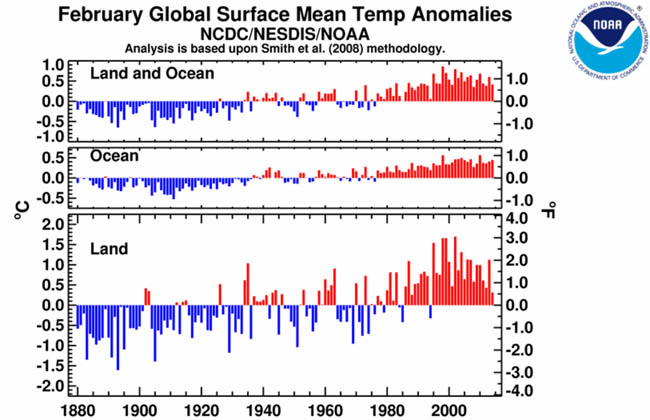 Temperature history for all Februaries from 1880-2014

How the Earth warms
As you can see in the graphic above, ocean temperature doesn’t vary as much as land temperature. This fact is intuitive to many people because they understand that coastal regions don’t experience as extreme highs and lows as the interiors of continents. Since oceans cover the majority of the Earth’s surface, the combined land and ocean graph strongly resembles the graph just for the ocean. Looking at only the ocean plots, you have to go all the way back to February 1976 to find a month below average. (That would be under President Gerald Ford’s watch.)

You can interpret variability over land as the driver of the ups and downs seen in the global graph. There are four years from 1976 onwards when the land was below average; the last time the land temperature was cool enough for the globe to be at or below average was February 1985. The flirtation with below-average temps was tiny – primarily worth noting in the spirit of accurate record keeping. Looking at any of these graphs, it’s obvious that earlier times were cooler and more recent times are warmer. None of the fluctuations over land since 1976 provide evidence contrary to the observation that the Earth is warming.

Some of the most convincing evidence that the Earth is warming is actually found in measures of the heat stored in the oceans and the melting of ice. However, we often focus on the surface air temperature. One reason for that is that we feel the surface air temperature; therefore, we have intuition about the importance of hot and cold surface temperatures. Another reason is historical; we have often thought of climate as the average of weather. We’ve been taking temperature observations for weather for a long time; it is a robust and essential observation. 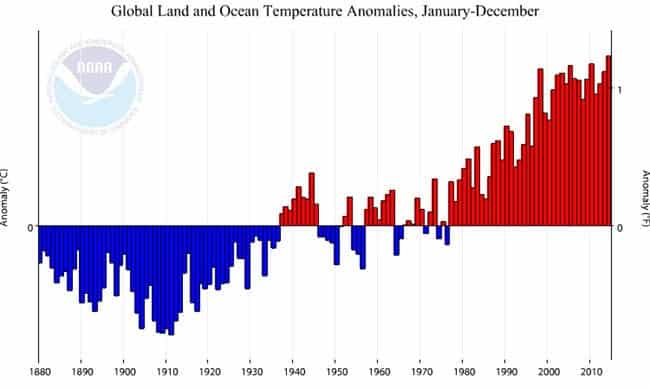 Despite variability, a stable signal
Choosing one month, February in this instance, perhaps overemphasizes that time in 1985 when we had a below average month. We can get a single yearly average for all the months in an entire year, January-December. If we look at these annual averages, then the ups and downs are reduced. In this case, 1976 emerges as the last year in which the global-average temperature was below the 20th century average of 57.0F (13.9C) – that’s 38 years ago, the year that Nadia Comaneci scored her seven perfect 10s at the Montreal Olympics.

I am not a fan of tracking month-by-month or even year-by-year averages and arguing over the statistical minutia of possible records. We live at a time when the Earth is definitively warming. And we know why: predominately, the increase of greenhouse gas warming due to increasing carbon dioxide in the atmosphere. Under current conditions, we should expect the planet to be warming. What would be more important news would be if we had a year, even a month, that was below average.

The variability we observe in surface temperature comes primarily from understood patterns of weather. Many have heard of El Niño, when the eastern Pacific Ocean is warmer than average. The eastern Pacific is so large that when it is warmer than average, the entire planet is likely to be warmer than average. As we look at averages, 30 years, 10 years, or even one year, these patterns, some years warmer, some cooler, become less prominent. The trend of warming is large enough to mask the variability. The fact that there have been 30 years with no month below the 20th century average is a definitive statement that climate has changed.

The 30-year horizon
There are other reasons that this 30-year span of time is important. Thirty years is a length of time in which people plan. This includes personal choices – where to live, what job to take, how to plan for retirement. There are institutional choices – building bridges, building factories and power plants, urban flood management. There are resource management questions – assuring water supply for people, ecosystems, energy production and agriculture. There are many questions concerning how to build the fortifications and plan the migrations that sea-level rise will demand. Thirty years is long enough to be convincing that the climate is changing, and short enough that we can conceive, both individually and collectively, what the future might hold.

Finally, 30 years is long enough to educate us. We have 30 years during which we can see what challenges a changing climate brings us. Thirty years that are informing us about the next 30 years, which will be warmer still. This is a temperature record that makes it clear that the new normal will be systematically rising temperatures, not the ups and downs of the last 100 years.

Those who are under 30 years old have not experienced the climate I grew up with. In thirty more years, those born today will also be living in a climate that, by fundamental measures, will be different than the climate of their birth. Future success will rely on understanding that the climate in which we are all now living is changing and will continue to change with accumulating consequences.

Richard Rood is Professor of Atmospheric, Oceanic and Space Sciences at University of Michigan. He writes a climate-change blog for Wunderground.com. This article is published courtesy of The Conversation under a Creative Commons-Attribution/No derivatives license.