Historians have offered various explanations, none of which really work. Ian Angus traces an important socialist slogan to its unexpected source. 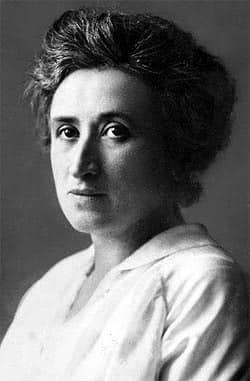 UPDATE, Nov. 22, 2014: Following up on Luxemburg and ‘Socialism or Barbarism’

I think I have solved a small puzzle in socialist history.

Climate & Capitalism’s tagline, “Ecosocialism or barbarism: There is no third way,” is based on the slogan, “Socialism or Barbarism,” which Rosa Luxemburg raised to such great effect during World War I and the subsequent German revolution, and which has been adopted by many socialists since then.

The puzzle is: where did the concept come from? Luxemburg’s own account doesn’t hold water, and neither do the attempts of left-wing scholars to explain (or explain away) the confusion in her explanation.

Luxemburg first raised the idea that humanity faced a choice between the victory of socialism and the end of civilization in a powerful antiwar pamphlet she wrote in prison in 1915. The Crisis in German Social Democracy – better known as The Junius Pamphlet, after the pen name she used to avoid prosecution – played a key role in educating and organizing a revolutionary left opposition to the pro-war leadership of the German Social Democratic Party.

Luxemburg attributed the concept to one of the founders of modern socialism:

“Friedrich Engels once said: ‘Bourgeois society stands at the crossroads, either transition to socialism or regression into barbarism.’ … Until now, we have all probably read and repeated these words thoughtlessly, without suspecting their fearsome seriousness. … Today, we face the choice exactly as Friedrich Engels foresaw it a generation ago: either the triumph of imperialism and the collapse of all civilization as in ancient Rome, depopulation, desolation, degeneration – a great cemetery. Or the victory of socialism, that means the conscious active struggle of the international proletariat against imperialism and its method of war.”

Here’s the problem: Despite many careful searches through his published and unpublished works, no one has found the words that Friedrich Engels supposedly said. So what’s going on?

First, we should note that the English translation incorrectly puts quotation marks around the sentence Luxemburg attributed to Engels. Those marks do not appear in her German text, which indicates that she wasn’t offering a direct quote, and we shouldn’t expect to find those exact words in Engels. That’s even more the case because she was writing in prison, with limited access to socialist books, so we must make allowances for memory errors.

With that in mind, let’s look at the suggestions three scholars have made for passages that Luxemburg might have had in mind when she attributed the sentence “Bourgeois society stands at the crossroads, either transition to socialism or regression into barbarism,” to Engels. 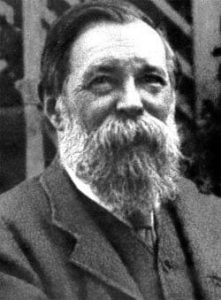 In The Rosa Luxemburg Reader, editors Peter Hudis and Kevin B. Anderson write: “Luxemburg probably has in mind a passage in the Communist Manifesto where Marx and Engels speak of class struggles resulting in ‘either a revolutionary constitution of society at large or the common ruin of the contending classes.’”

Although that passage expresses a related idea, there are three serious objections to it as Luxemburg’s source. First, her wording is so different from the Manifesto’s that it’s hard to imagine her getting it so wrong, even quoting from memory. Second, it’s unlikely that she would attribute a passage from Marx & Engels’ best-known collaboration to Engels alone. And third, the standard English translation I’ve quoted above, which Hudis and Anderson also use, omits three important words that appear after “as Friedrich Engels foresaw it a generation ago” in the original German: vor vierzig Jahren. Surely no one writing in 1915 would refer to 1848, when the Manifesto was published, as forty years ago.

Forty years would go back to the mid-1870s, which directs our attention to Anti-Dühring, which Engels published in serial form in 1877-78, and as a book in 1879. Since it was the most comprehensive statement of the Marxist worldview written by either of the movement’s founders, it’s a reasonable place to look for quotes similar to the one Luxemburg attributed to Engels – and two scholars have done just that.

In The Legacy of Rosa Luxemburg, Norman Geras suggests that she was “probably” referring to a passage in which Engels disputes Dühring’s claim that force, not economic development, is the dominant factor in history. Engels argues that attempts to use force to turn back economic progress have almost always failed, except in a few “isolated cases of conquest, in which the more barbarian conquerors exterminated or drove out the population of a country and laid waste or allowed to go to ruin productive forces which they did not know how to use.” As an example, he cites the Christian invaders who let advanced irrigation systems decay after they overthrew Muslim rule in Spain.

That passage does discuss a disastrous conflict between civilization (Muslims) and barbarians (Christians) which the latter won, but it says nothing about capitalism or socialism, nor did Engels draw the general conclusion Luxemburg attributes to him. Nice try, but it doesn’t work.

In a recent essay, Michael Löwy suggests that Luxemburg may have been referring to this passage in Anti-Dühring:

Again, this  expresses a related concept, but as Löwy firmly points out, the passage is “quite different,” in both words and meaning, from the quote Luxemburg attributes to Engels. Löwy concludes that the search for a source for Luxemburg’s slogan is bound to fail, because:

“In fact, it is Rosa Luxemburg who invented, in the strong sense of the word, the expression ‘socialism or barbarism,’ which was to have such a great impact in the course of the twentieth century. If she refers to Engels, it is perhaps to try to give more legitimacy to a fairly heterodox thesis.”

That’s a reasonable conclusion, but I think it’s wrong. For one thing, the idea that Luxemburg invented the expression in 1915 is contradicted by her assertion that “we have all probably read and repeated these words thoughtlessly.” It is clear that she expected her readers to be familiar with the phrase: it wasn’t something new and strange. And that means there was a third-party source. 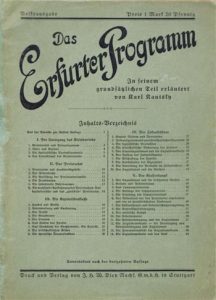 The search for Luxemburg’s quotation in Engels’ works is bound to fail, because he didn’t say it. The problem isn’t misquotation, it is misattribution.

The author of the sentence Luxemburg quotes, and of the “socialism or barbarism” concept more generally, was not Engels, but the man who was widely viewed as the most authoritative Marxist theoretician after Marx and Engels – Karl Kautsky.

The German Social Democratic Party (SPD) was founded in 1875 as a merger between Marxists and followers of Ferdinand Lasalle, with a program that was broadly socialist but not Marxist. In 1891 Karl Kautsky and Eduard Bernstein drafted a Marxist program that Kautsky rewrote after public discussion: it was adopted at a party congress in Erfurt that year. The Erfurt Program, as it was known, remained the SPD’s official program until after World War I, and was widely used by socialist parties in other countries as a model: Lenin, for example, based his 1896 draft program for Russian socialists on it.

The program itself was deliberately brief – just over 1300 words in English translation – with little in the way of explanation or argument, so Kautsky then wrote a book-length popular commentary on it, explaining the program and arguing the case for socialism. Das Erfurter Programm in seinem grundsätzlichen Teil erläutert (The Erfurt Program: A Discussion of Fundamentals) was published in 1892. Historian Donald Sassoon writes that the program “became one of the most widely read texts of socialist activists throughout Europe” and Kautsky’s commentary “was translated into sixteen languages before 1914 and became the accepted popular summa of Marxism” around the world.

Rosa Luxemburg, who became active in the Polish and German socialist movements in the 1880s, undoubtedly read Kautsky’s book, and would have heard its ideas discussed many times. Chapter 4 includes this passage:

“If indeed the socialist commonwealth were an impossibility, then mankind would be cut off from all further economic development. In that event modern society would decay, as did the Roman empire nearly two thousand years ago, and finally relapse into barbarism.

“As things stand today capitalist civilization cannot continue; we must either move forward into socialism or fall back into barbarism.”

The similarities between this passage and the one quoted above from The Junius Pamphlet are obvious. The crucial final clause in Kautsky is virtually identical to its counterpart in Luxemburg’s “Engels quote” –

Luxemburg has used nouns instead of verbs, but otherwise the two are the same.

Further confirmation that Luxemburg’s words had their origins in Kautsky’s book is found in the fact that both refer to the fall of the Roman Empire as an example of a society that regressed because it failed to move forward, a subject Löwy unfortunately dismisses as “not very relevant.”

So why did Rosa attribute the “socialism or barbarism” idea to Engels instead of Kautsky? It’s impossible to know for sure, but it seems likely that after two decades of wide use as the popular explanation of socialism, many of the concepts and forms of expression in Kautsky’s book had become common currency in socialist circles, to the point where the words were detached from their specific origin. Think of the many quotations that are wrongly attributed to Albert Einstein, and you’ll have an idea of how Kautsky’s phrase could be credited to Engels. When she quoted it from memory in prison in 1915, Rosa Luxemburg made an informed (but wrong) guess that the most likely place to find it would be Anti-Dühring, so she added the “40 years ago” reference. Her pamphlet then had to be printed in Switzerland and circulated illegally in Germany, so detailed source-checking wasn’t on the agenda.

Kautsky’s authorship of “socialism or barbarism” wasn’t identified before this, I suspect, because after he condemned the Bolshevik revolution, socialists stopped reading Kautsky. As someone has joked, thanks to Lenin’s polemic many people think that Kautsky’s given name was Renegade. Most of his works are now out of print or available only in German in expensive academic editions. As this case shows, that neglect has made it more difficult to understand Luxemburg.

If I’m correct, then Michael Löwy is wrong to suggest that Luxemburg “invented, in the strong sense of the word, the expression ‘socialism or barbarism.’” Rather, she wrote “we have all probably read and repeated these words” because that was the simple truth – as a result of Kautsky’s widely-read book, the idea that humanity must move forward into socialism or fall back to barbarism was already well-known among socialists in Germany.

Her great contribution was to give “socialism or barbarism” a more immediate and profound revolutionary meaning than the original author intended. The words came from Karl Kautsky, but Rosa Luxemburg gave them wings.

This article was first published in John Riddell’s Marxist Essays and Commentary.