Indigenous communities in Chiapas, Mexico, oppose government plans to drive a tourism highway through their lands 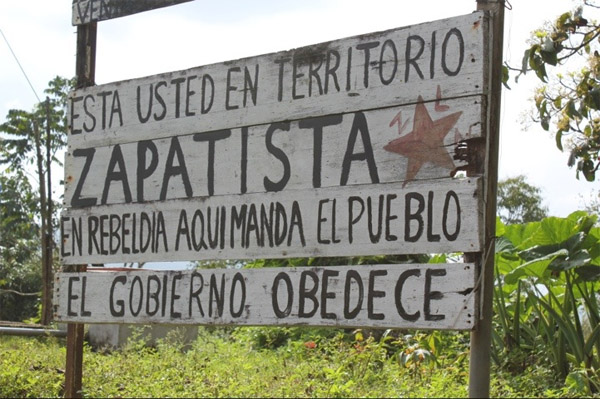 Signs such as these stand in many towns along the existing road from San Cristóbal to Palenque. “You are in Zapatista rebel territory. Here the people command and the government obeys.”

Earlier this year, I travelled from San Cristóbal de las Casas to Palenque on the existing road through the mountains, which is slow, twisting, and beautiful. When I heard about this highway project, I could only think of Joni Mitchell’s lyric:

“They paved paradise and put up a parking lot …”

San Cristobal de Las Casas, Chiapas.  Residents of five communities, in the municipalities of San Cristóbal, San Juan Chamula and Huixtán warned they will not allow the highway to link Palenque with San Cristóbal to pass through their lands because “it will not benefit them at all.”

“We, men, women, children, and old people, will not allow this project of death, we will fight to the end to prevent them from taking our mother earth,” said the villagers of La Candelaria, San Antonio Las Roas and Predio Santiago, from San Cristóbal; Nichnamtic, from Chamula and  Monte Bonito, from Huixtán.

With an investment of about ten million pesos, the federal government is planning to build a free highway to link San Cristóbal with Palenque, the two tourist areas in Chiapas which are most visited by Mexicans and foreigners.

In a document the protesters said: “The government has planned that the highway will pass through part of our land, which will affect our food supply, crops, the springs which are the source of the holy water for our life and the piped water supply.”

They said that the project “will not benefit us at all and although the bad government says it will pay us for the affected land, the money will run out, and then how will we live? And besides, a mother is not for sale.”

They stated that “to defend life, we ​​are willing to give life,” while asking the authorities to “not to continue robbing the indigenous peoples of our resources, because we are human beings with the right to live and to own our springs and lands.”

The indigenous protesters against the project said that the government “only acts for the interests of big business and for this reason is making many reforms, not for the benefit of Mexicans but for the big people who are ambitious for the wealth of our country.”

They added: “With great sadness we see that our mother earth is threatened because the neoliberal policies which have been implemented in recent years make it easier for large national and foreign capitalists to take over the country’s resources: land, oil, minerals, water, wood and archaeological sites, among others.”

They said that “the government promotes the interests of big business and therefore promotes laws and changes in the Constitution, in order to benefit them through taking over resources.”