I’m a regular reader of the radical web journal CounterPunch. I don’t always agree with the articles it publishes, but even those I question are usually thoughtful and well-researched. But every once in a while, CounterPunch’s editorial filter fails, and it inexplicably publishes articles by people whose views are, shall we say, bizarre.

A recent case in point is a rant by libertarian John V. Walsh, attacking V.J. Prashad’s review of A Colossal Wreck by the late Alexander Cockburn.

Prashad’s review was generally favorable, but he noted that Cockburn’s “cantankerous politics” included contrarian positions that had more in common with the far right than the left, including climate change denial.

“[Cockburn]  quite rightly pointed out the decade long pause in warming, grown to 15 years by the time of his death.  The pause was not predicted by the models used to justify the ill-defined ‘Catastrophe,’ and it means that the direst predictions of the CAGW crowd are, let us say, a fantasy.”

He goes on to compare those who accept the best conclusions of climate science to Jehovah’s Witnesses who oppose blood transfusions.

The claim that global warming has “paused” has become a staple of climate change denialism. No one ever said that global warming will be a constant, year-after-year process with new records set every year. There will always be fluctuations, but the long-term trend is absolutely clear. 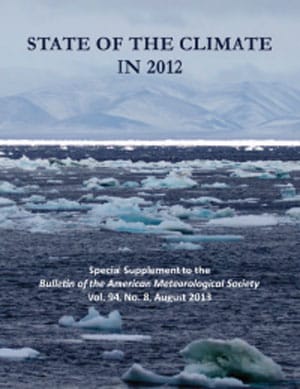 As an antidote to Walsh’s nonsense, I recommend the peer-reviewed  report State of the Climate in 2012, released on August 6 by the American Meteorological Society. It shows that for the United States and Argentina 2012 was the warmest year ever, and worldwide 2012 was one of the top 10 hottest years.

The Arctic, in particular, experienced unprecedented change: sea ice shrank to its smallest extent since satellite records began 34 years ago, and melting in the Greenland ice sheet was four times greater than the 1981–2010 average.

Heat content in the upper 700 meters of the oceans remained near record high levels in 2012.

Sea levels reached record highs in 2012. Globally, sea level has been increasing at an average rate of 3.2 ± 0.4 mm per year for two decades.

Greenhouse gas concentrations, including carbon dioxide, methane, and nitrous oxide, continued to rise during 2012. Global CO2 emissions from fossil fuel combustion and cement production reached a record high in 2011, and a new record is estimated for 2012. Atmospheric CO2 concentrations increased by 2.1 ppm in 2012, reaching a global average of 392.6 ppm for the year. For the first time, the atmospheric CO2 concentration exceeded 400 ppm at several Arctic observational sites.

Once again, science trumps ideology. Global warming isn’t a fantasy: it’s a serious threat to every aspect of life as we know it. Walsh’s whistling in the dark won’t make it go away.

State of the Climate in 2012, which Walsh obviously didn’t read, is available online.