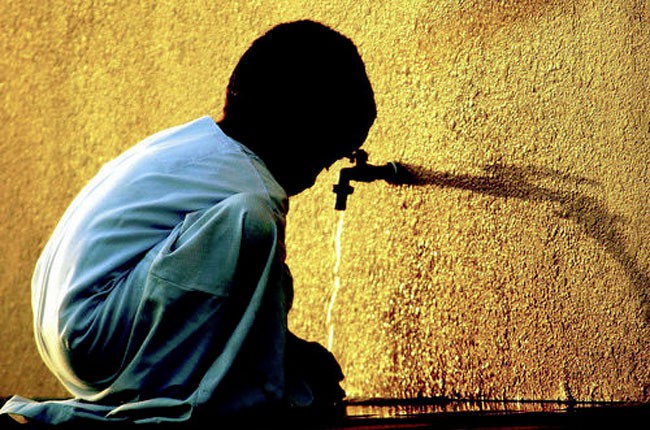 Some 1.2 billion people—almost one fifth of the world—live in areas of physical water scarcity, while another 1.6 billion face what can be called economic water shortage. The situation is only expected to worsen as population growth, climate change, investment and management shortfalls, and inefficient use of existing resources restrict the amount of water available to people. It is estimated that by 2025 fully 1.8 billion people will live in countries or regions with absolute water scarcity, with almost half of the world living in conditions of water stress.

Water scarcity has several definitions. Physical scarcity occurs when there is not enough water to meet demand; its symptoms include severe environmental degradation, declining groundwater, and unequal water distribution. Economic water scarcity occurs when there is a lack of investment and proper management to meet the demand of people who do not have the financial means to use existing water sources; the symptoms in this case normally include poor infrastructure. Large parts of Africa suffer from economic water scarcity.

Regionally, nearly all Arab countries are considered water-scarce, with consumption of water significantly exceeding total renewable supplies. The region has less than 500 cubic meters of renewable water resources available per person annually. About 66 percent of Africa is arid or semiarid, and more than 300 million people in sub-Saharan Africa live on less than 1,000 cubic meters of water resources each.

Although the Asia-Pacific region is home to almost 60 percent of the world’s population, it only has 36 percent of global water resources. In 2009, the region had 2,970 cubic meters of water resources per person. Although this is not a sign of water scarcity, it is still less than half of the world’s average of 6,236 annual cubic meters. Parts of northern China, India, and Pakistan suffer from both physical and economic scarcity. In comparison, the average amount of water available per person in Latin America is about 7,200 cubic meters, although it is only 2,466 cubic meters in the Caribbean.

Water resources face many pressures, including population growth, increased urbanization and overconsumption, lack of proper management, and the looming threat of climate change. According to the U.N. Food and Agriculture Organization (FAO) and UN Water, global water use has been growing at more than twice the rate of population increase in the last century. World population is predicted to grow from 7 billion to 9.1 billion by 2050, putting a strain on water resources to meet increased food, energy, and industrial demands.

At the global level, 70 percent of water withdrawals are for the agricultural sector, 11 percent are to meet municipal demands, and 19 percent are for industrial needs. These numbers, however, are distorted by the few countries that have very high water withdrawals, such as China, India, and the United States.

Water use in agriculture is often inefficient, which has led to the overexploitation of groundwater resources as well as the depletion of the natural flow of major rivers, such as the Ganges in India and the Yellow River in China. Around 54 percent of the total area available for irrigation is irrigated with surface water, 5 percent with groundwater, and 41 percent with a combination of both sources. But when both sources are used together, less than 15 percent of it is surface water, which has led to a doubling of the global depletion of groundwater resources in the last 50 years. The Ganges, Indus, and Yellow River basins in Asia have already reached high levels of water crowding and suffer from sever water shortage due to overuse.

Policymakers must introduce a variety of measures to address global water scarcity. One important initiative is to support small-scale farmers. Much of the public investment in agricultural water management has focused on large-scale irrigation systems. But supporting smallholder farmers, who in general operate without large infrastructure such as dams, canals, and distribution devices, can decrease the amount of water used in the agricultural sector. This support must be accompanied by smart subsidies. In India, for example, many farmers who receive free electricity all day are experiencing groundwater depletion due to overpumping. To address this issue, policymakers in the state of Gujarat reduced the amount of time that farmers could pump water to eight hours on a pre-announced schedule that meets peak demand but also reduces total water usage.

Farmers can also use water more efficiently by taking a number of steps, including growing a diverse array of crops suited to local conditions, especially in drought-prone regions; practicing agroforestry to build strong root systems and reduce soil erosion; maintaining healthy soils, either by applying organic fertilizer or growing cover crops to retain soil moisture; and adopting irrigation systems like “drip” lines that deliver water directly to plants’ roots. Rice farmers, for example, can adopt the System of Rice Intensification (SRI), which not only increases crop yields but uses 20–50 percent less water than conventional rice production. SRI is an innovative method of increasing the productivity of irrigated rice with very simple adjustments to traditional techniques. It involves transplanting younger seedlings into a field with wider spacing in a square pattern, irrigating to keep the roots moist and aerated instead of flooding fields, and increasing organic matter in the soil with compost and manure.

While the growing world population is increasing the pressure on land and water resources, economic growth and individual wealth are shifting people from predominantly starch-based diets to meat and dairy, which require more water. Producing 1 kilogram of rice, for example, requires about 3,500 liters of water, while 1 kilogram of beef needs some 15,000 liters. This dietary shift has had the greatest impact on water consumption over the past 30 years and is likely to continue well into the middle of this century, according to FAO.

Water challenges are compounded by the fact that agriculture competes with other uses, including hydropower. All forms of energy require water at some stage of their life cycle, which includes production, conversion, distribution, and use. Energy and electricity consumption are likely to increase over the next 25 years in all regions, with the majority of this increase occurring in non-OECD countries. This will have direct implications for the water resources needed to supply this energy. It is anticipated that water requirements for energy production will increase by 11.2 percent by 2050 if the current mix of energy sources is maintained. Under a scenario that assumes increasing energy efficiency of consumption modes, the World Energy Council estimates that water requirements for energy production could decrease by 2.9 percent by 2050.

Luckily, there are also technical solutions to more-efficient water use in the energy sector. For example, brackish water, mine pool water, or domestic wastewater and dry cooling techniques have been used for cooling power plants. Research is also ongoing into the water efficiency of biofuels, the energy efficiency of desalination, and the reduction of evaporation from reservoirs.

Climate change will also affect global water resources at varying levels. Reductions in river runoff and aquifer recharge are expected in the Mediterranean basin and in the semiarid areas of the Americas, Australia, and southern Africa, affecting water availability in regions that are already water-stressed. In Asia—in particular, in countries such as Pakistan—the large areas of irrigated land that rely on snowmelt and high mountain glaciers for water will be affected by changes in runoff patterns, while highly populated deltas are at risk from a combination of reduced inflows, increased salinity, and rising sea levels. And rising temperatures will translate into increased crop water demand everywhere.

To combat the effects of climate change, efforts must be made to follow an integrated water resource management approach on a global scale. This involves water management that recognizes the holistic nature of the water cycle and the importance of managing trade-offs within it, that emphasizes the importance of effective institutions, and that is inherently adaptive.

(Tables, diagrams and reference notes for this report are online at Vital Signs)