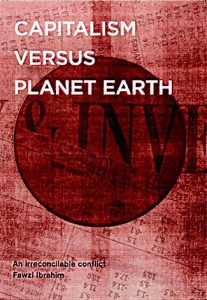 Is it just a coincidence that the environment is heading towards a tipping point at the same time as capitalism faces a crisis of equally serious dimensions?

Has the significance of the intersection of economic and environmental crises been missed?

Is planet Earth is safe with capitalism?

In Capitalism versus Planet Earth – An Irreconcilable Conflict, Fawzi Ibrahim gives serious consideration to these vital questions. He has kindly given us permission to publish the following excerpts.

The anthropocene and the credit crunch

While the actions of mankind over the past thousand years have had a detrimental effect on the environment, it wasn’t until the Industrial Revolution that such effect became geologically significant – so much so that two eminent scientists, Paul Crutzen and Eugene Stoermer, proposed in a paper published in 2000 that this age be called the “Anthropocene,” “the recent age of man,” on the grounds that human activities have brought about profound and fundamental changes to the planet.

It is no coincidence that environmental degradation should have reached the crisis level it is at today at the same time as capitalism experiences one of the worst crises in its history. As CO2 pollution rose to its highest level, Lehman Brothers filed for bankruptcy and the crisis that has been dubbed the Credit Crunch took hold. But the Credit Crunch (and the subsequent economic and sovereign debt crises) is no ordinary crisis.

While the outward symptoms of the Great Crash and the 2008 meltdown are similar – bank failures, economic downturn, unemployment, hardship and near-collapse of the system – the underlying terrains are anything but. In fact they are polar opposites. The 1930s’ depression was one of abundance, abundance of capital; that of 2008 is one of deficiency, capital deficiency. Galbraith in his celebrated book The Great Crash wrote “The causes of the Depression are still far from certain.”

That may or may not be true, but its terrain is well known. It is what Keynes and others refer to as “over-investment,” or under-consumption and what Marx, a century earlier, called “over-production,” a condition which Keynes described as “a shortage of houses, but where nonetheless no one can afford to live in the houses that there are.”

A crisis too far

The much neglected and maligned theory of the tendency of the rate of profit to fall (mainly associated with Marx), has its roots with Adam Smith and Ricardo, and is now beginning to come into its own …. If the rate of profit has a tendency to fall, then, coupled with increasing high levels of capital accumulation, a threshold is reached, which, if crossed, makes production-for-profit unviable. At this stage, capital enters a “critical zone,” poised at the edge of a vortex, one wrong move and it is the end. This is twenty first century capitalism.

In highly developed economies such as those of the US and the UK, in which the baseline capital investment is measured in trillions, even a modest drop in the rate of profit would necessitate additional investment in billions if profits were to be maintained …. Eventually a tipping point will be reached at which the necessary increase in investment to counterbalance a drop in the rate of profit will be prohibitively high – greater than the market can provide. Welcome to the Credit Crunch.

The fallacy of ‘natural capitalism’

So, what is “natural capitalism”? It’s certainly not natural in the sense that it’s God-given like the natural water we drink or the air we breathe. What the authors have in mind is a pristine capitalism, capitalism before it was corrupted by capitalists, an innocent capitalism, that has been abused. They believe that capitalism has no innate set of economic laws that govern its operation and that it was man who made the rules which have shaped capitalism, and had these sets of economic laws been different, capitalism could have developed and behaved differently. “What if our economy were organised not around lifeless abstractions of neoclassical economics and accountancy but around the biological realities of nature?”

According to this theory, the “lifeless abstractions” of supply and demand and marginal cost were imposed on the market by Adam Smith in the first case and Marshall in the second.

The effect of designating natural resources as capital is that common public resources that are free today are given value. By giving free natural resources value – something that can only be expressed in terms of price, or what Adam Smith calls “exchangeable value” – they become commodities. Solar energy, forests, air, water, green spaces, living organisms, the ecological system itself turn into commodities. And, like any other commodity, they can be bought and sold, traded on the commodity market and speculated upon.

In his book Growth Fetish (2004), Clive Hamilton blames growth for practically everything that is wrong in the world: skewed priorities of individuals, materialism overtaking society, greediness, sick society, business exercising enormous political power, depression, crime and drug abuse, youth suicide, and poverty – not to mention environmental decline in all its aspects from global warming and climate change to deforestation and pollution. The only thing that growth is not responsible for seems to be earthquakes and tsunamis.

By emphasising the limits to growth and how we must lower the expectations of people in both the developed and developing economies, the anti-growth environmentalists pave the way for lower standards of living, lower pay and worsening conditions – in a word, austerity; precisely what the financiers are demanding in the aftermath of the financial meltdown of 2008.

In the economic and political turmoil that is gripping the globe, the last thing on the minds of world leaders is concern for the increasing atmospheric CO2 concentration, the depletion of the polar ice cap or the acidification of the oceans. Capitalism is on a roller coaster with peaks and troughs, bends and loops of unpredictable severity; and the ride has just begun. Among all the uncertainties, one thing is certain; planet Earth is not safe in capitalist hands.