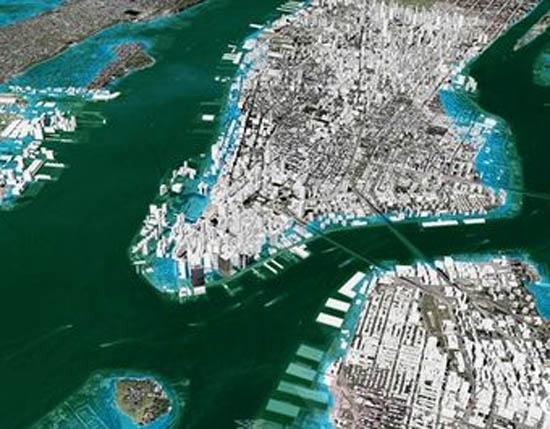 Map of New York City if sea levels rise 3 meters (areas underwater are in light blue). The map was published in 2007 in a report warning about the dangers of unabated climate change and sea level rise. The picture resembles superstorm Sandy’s impact on Lower Manhattan.
© 2007 2030, Inc. and © 2007 Google. Image courtesy of Architecture 2030, www.architecture2030.org

Five years ago, a report called “Nation Under Siege” illustrated the vulnerability of 31 U.S. coastal cities to flooding. But not just to any kind of flooding—to the flooding of a permanent kind from sea level rise.

What will happen to these cities, the report asked, as sea levels continue to increase from global warming?

The study provided answers in a series of 3-D maps constructed using data from federal science agencies and the United Nations’ climate panel. The maps provide an uncanny prediction of what transpired Monday night when superstorm Sandy engulfed 1,000 miles of Atlantic coastline.

Most striking is the 3-D map of New York (pictured above), which shows what could happen to the city with a 3-meter (9.8-foot) rise in sea level: Lower Manhattan, the East Village neighborhood and the FDR Drive underwater. That’s exactly what Sandy’s 3-meter storm surge delivered.

As Naomi Klein wrote in the same year, in The Shock Doctrine,

“It’s easy to imagine a future in which growing numbers of cities have their frail and long-neglected infrastructures knocked out by disasters and then are left to rot, their core services never repaired or rehabilitated. The well-off, meanwhile, will withdraw into gated communities, their needs met by privatized providers. ”

In short, now we all live in New Orleans.