A devastating indictment of the oil and drilling industry, and of the politicians and political appointees who failed to protect the people and environment of the Gulf. An invaluable resource for activists challenging the pro-oil policies of both major U.S. political parties.

Two years ago, the 40th anniversary of Earth Day was turned into an environmental nightmare when what would turn out to be the largest oil spill in U.S. history began to unfold in the Gulf of Mexico. 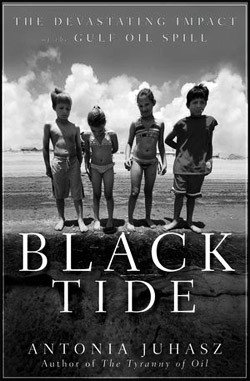 On April 20, 2010, a BP oil rig exploded off the Louisiana coast, unleashing millions of gallons of oil into the waters of the Gulf of Mexico. As the spill continued unabated for three months, some 25,000 barrels (some estimates ranged as high as 80,000 barrels) gushed into the sea floor each day–promising to destroy the fragile ecosystem and wreck the lives and livelihoods of the people who live on the Gulf Coast for many years to come.

Like the Exxon Valdez disaster in which an oil tanker spilled some 11 million gallons of oil in Alaska’s Prince William Sound more than two decades earlier, the BP spill focused attention on the threat of ecological destruction – and oil companies’ thirst for profits that were behind this nightmare.

Antonia Juhasz’s book Black Tide is a devastating indictment of the oil and drilling industry that was responsible. But she doesn’t stop there. She’s also included damning evidence of the role of U.S. politicians, government agencies and regulations that all failed to protect the people and environment of the Gulf.

The result of that failure is well known – 11 dead oil rig workers and the second-largest oil spill in world history (outranked only by the intentional dumping of oil in the Persian Gulf by Saddam Hussein during the first U.S. war on Iraq).

Black Tide is an exhaustive study of what happened on the Deepwater Horizon from before the explosion through the following year. For those looking to understand the disaster, this book is a brilliant recounting. Though it’s full of all the important details and timelines, Juhasz, for the most part, avoids dry statistics and tells a compelling story full of the lives of those impacted.

The book’s opening chapter feels like a screenplay of an action movie. It begins the night of the explosion with the shadowy figures of BP and Transocean executives at the helm of the Deepwater Horizon oil rig.

The rig was set to the simulation mode so that the executives could have a chance to play captain. The new vice president for drilling and completions for the entire Gulf of Mexico had never been on an offshore rig before, and so doubtless wanted a turn at the big wheel.

The executives were taking a break from their exhausting work of berating the crew to work faster at getting to the oil. The well was 50 days behind schedule and $90 million dollars over budget.

This picture literally explodes around 9:50 p.m., and we are taken on a minute-by-minute tour through the rig. Juhasz has compiled harrowing survivors’ stories and the tragic deaths of friends and coworkers that they witnessed.

She went into the homes of the families of those who died and reconstructed their lives through heartbreaking interviews. The opening chapter is a tragic testament to a group of people who were literally killed for profit.

If you’re not furious by the end of the first chapter, Juhasz supplies more galling stories of those people impacted by the oil that would soon start lapping up on beaches across the Gulf states. In addition, we learn of the fate of the wildlife that were drowned, burned and smothered in oil.

We do however also find heroes in this story. We are treated to portraits of families coming together to build community support and organization in order to eke out a living in the worst economy since the great depression. We learn about immigrant, Native American and religious communities organizing for social and environmental justice.

One of the few heroes to emerge from the rig itself is Andrea Fleytas, who was 23 at the time of the explosion. Fleytas was on the bridge of the Deepwater Horizon when it blew. Juhasz writes:

“It was Fleytas, one of three women on the crew, who manually set off the ship’s general alarm at 9:47 p.m. when the automatic alarms failed to signal that combustible gas had entered parts of the rig where crews were working…

“It was Fleytas who…four minutes after the explosions–with power out, communication out, engines down, fires throughout the rig, and men throwing themselves overboard–noticed that no one had sent a distress signal to the outside world.”

For activating that distress signal, Fleytas was reprimanded by the captain of the rig.

The rig, which sunk two days later, was taller than the Brooklyn Bridge and larger than an NFL football field. It operated 24 hours a day, 365 days a year to keep profits flowing. It was for the sake of those profits that Transocean, owner of the rig, hadn’t bothered to recertify the blowout protector in 10 years, though it was required every five.

And it was those same profits that lead BP not to report this breach of security. As Keith Jones, the father of one of the 11 men to die in the explosion at the Macondo well, said, “They murdered my boy … Greed murdered my boy.”

Johahz pays particular attention to BP’s attempts to downplay the size of the oil gushing from the blow out. She follows independent teams of scientists into Gulf waters, laboratories, universities and communities impacted by the spill to show how this data can and should be collected if accurate results are the objective – which of course for BP it is not. For every verified gallon of oil spilled, the potential money BP will owe in recompense increases.

In the face of opposition from many scientists at the Environmental Protection Agency, the Coast Guard and the EPA authorized the use of toxic dispersants on the oil spill. The hundreds of thousands of gallons of toxic dispersants that were dumped into the water didn’t remove the oil–they merely spread it around and made it harder to track how much was spilled.

Juhasz describes how BP policed the oil-covered beaches to keep journalists, scientists and citizens away. While it’s estimated that only 4 percent of the spilled oil was collected by skimmers–removing it from the water in a safe way–and an estimated 6 percent was burned off the surface, 90 percent of the oil spilled was washed up on shore or was “dispersed” and remains in the ocean.

Black Tide explores the way that BP, politicians and the media severely downplayed public health concerns. Even as the oil flowed and tourist season started on the Gulf Coast beaches, the governor of Alabama declared the beaches clean and the media.

Juhasz recounts hot June days with people strolling on beaches and children playing in water that appeared normal and without oil or petroleum, but upon chemical sampling was found to be toxic. Samples that should not contain more than five parts per million (ppm) of oil were testing at 16-221 ppm. One sample exploded in the lab.

The chemist running the tests claimed, “I’ve never seen anything like it in 30 years. It is either due to the methanol or methane gas or the presence of the dispersant Corexit.” People were lied to about this potential exposure to harmful toxins. The repercussions from such exposure will likely make themselves known in the decades ahead.

With the Obama administration expanding offshore oil drilling before and after this disaster, it’s unclear why Juhasz would choose to title her last chapter, “Obama Steps Up.” Throughout the book and this particular chapter she chronicles the history of bipartisan support for oil drilling and policy that favors the industry.

She documents how the Obama administration let BP call so many of the shots during the four months that oil gushed into the Gulf. She exposes Obama’s former National Security Advisor, James Jones – a former Chevron board member–who was given a role in the cleanup.

She ends the book by condemning the administration’s hastiness to declare the “oil gone” from the Gulf waters only days after the well was officially capped and oil was clearly still present in Gulf waters.

The Macondo well, in “hibernation” for now, is still seen as a potential site for future drilling, while estimates are that at least six new wells will be drilled in the Gulf this year. With the Obama administration’s approval, Shell Oil will start exploratory drilling for new offshore oil wells along the Alaskan coastal waters of the Chukchi Sea this coming June.

This administration has clearly not absorbed the impact of the Deepwater Horizon disaster. Those looking to build opposition to the “drill, baby, drill” mantra, now pervasive in both major U.S. political parties, will find Juhasz’s book an invaluable place to start.