The Durban agreement doesn’t do what it should. And what it it does do, it shouldn’t

From 2009 to 2011 Nele Marien was a negotiator for Bolivia to the UNFCCC. She helped organize the Cochabamba World People’s Conference on Climate Change and the Rights of Mother Earth,  specifically responsible for the working group on climate debt. She posted this article on her blog, For whom the bell tolls, on Decembner 13.

The official package deal of Durban consisted of 4 main documents, apart of several other decisions, most of them less critical, that have been adopted:

The package was officially sold to the world as a success, but having a closer look, it’s easy to see it doesn’t do what it is suposed to do, and it does what it shouldn’t do.

Rather then having a look decision by decision, let’s have an overall look on what the “package”implies.

Climate scientists are advising us insistently: the world just has a few years to start acting on climate change, if not we may enter in an irreversible spiral of climate disaster. So the most urgent issue is to start acting NOW on real mitigation.

Unfortunately, the Durban package doesn’t attend this at all. During the whole Durban negotiation, there hasn’t even been a real discussion on the issue.

The reduction pledges by developed countries that are on the table, are still the same, totally insufficient, 13-17% reduction rates (from 1990 levels) since Copenhagen. Increasing the ambition is again postponed indefinitely. Inscribing those pledges in a legally binding Kyoto Protocol doesn’t change anything to the fact that those pledges will cook the world.

But, the Durban package – despite announcing the contrary – didn’t even adopt the second commitment period of the Kyoto Protocol. It just ‘took note” of the “proposed amendments” to do so. The actual decision is postponed until next year. (More extensive analysis on this here)

Even developing countries pledged to do more than developed, but lack the financial and technological means to go beyond what they promised already.

The other issue that is postponed since Copenhagen, and once again forwarded to discussions for next year, is the global goal. That is to say, how much should the world reduce its emissions by 2050? This longer term targets are essential if we want to stabilize the climate. Planning for it now is indispensable. But the numbers aren’t even being discussed.

Of course, it is a very difficult discussion. Several important aspects determine it:

So, without criteria for division of the burden, nobody actually wants to talk on the mitigation necessity. But, we can’t negotiate the carbon budget with Mother Earth: if we trespass it, she will act on us!

Again, the world is left waiting for the real answers, while the questions at stake become more urgent year after year.

Throwing away the valuable 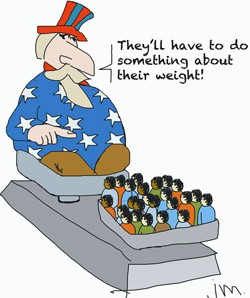 Two basic principles, most valuable, embedded in the climate change convention, have always led the work up till know: the Science Principle, and the Equity Principle, which is known in negotiators jargon as “Common But Differentiated Responsabilities”. Both are being thrown away.

Of course, nobody says the science principle will be disregarded. Indeed, there are several references to science and to the work of the IPCC, in the different texts. But was is the use of stating “keeping in mind science, I will do just the opposite science is requiering”? And that’s exactly what this decisions are doing. There no link between the mitigation targets and the scientific requirements. But worse, we are now openly accepting that during the whole decade, this link won’t be made. It is the reign of the “voluntary pledges”, at least up till 2020.

Also equity is totally being undermined. An agreement to start negotiating an “agreed outcome with legal force” (probably a new Protocol), is forced upon developing countries, with the clear addition that it will be “applicable to all”. This contrasts strongly with all the previous decisions about climate change, which were always placed in the context of the ‘Common But Differentiated Responsabilities’. The agreement to negotiate a new legal outcome not only omits all references to it, it has been consciously taken out. Someone tweeted from the final plenary that the principle US negotiator reportedly said: “if equity is in, then the US is out”. It seems the US’ wishes are being considered as the future of the new climate regime.

Up till the moment, existing carbon markets have proven to be the worse idea for environment and equity. Just some elements out of long list fairly long list of why carbon markets don’t work: the essentially trespass emission rights from poorer countries (with low emissions per capita and needs to grow in order to lift population out of poverty) to richer countries (with high per capita emissions and desires of not diminishing their unsustainable lifestyle). By doing so, the originally projected emission growth in developing countries is locked in: or the emissions will take place in the developing country, or through offsets, in the developed.

Worse is that there are so many problems with baselines, with projects that count for offsets but are not additional, with other environmental or human rights impacts, that carbon markets are regarded the biggest non-solution for the climate, and a collective lie to the public which is being told that in this way something is done.

But, the bad plans always seem to have priority, and the carbon markets are high on the agenda of most governments. Before the conference, one could hear a lot more worry from the governments and corporations side on “positive signals for the carbon markets”, than on “improving the level of ambition.” One of the main reasons the Kyoto Protocol hasn’t been killed completely, is precisely that this was necessary for the stability of carbon markets, especially the European system.

So, despite the abundant critiques on existing carbon markets, they have been strengthened a lot through the Durban decisions. There has been a strong impulse for them in four areas:

1) In the “proposed amendment” on the KP, carbon markets are opened up for all parties, even for those that will not be a member of the second commitment period. Furthermore, the door is opened for “any new kind of market mechanism to be established under the convention” to be valid under the Kyoto scheme.

2) A separate discussion was made to include Carbon Capture and Storage (CCS) in the Clean Development Mechanisms. This technique provides the illusion that we can keep emitting, as the gases will be stored later on, while in fact their storage is at high danger to escape again to the atmosphere at some point of time. At the same time, the market units based on CCS will give more emission rights to those buying the offsets.

3) In the text on LCA, markets are now definitely approved as an answer to deforestation and degradation of forests. (art 66). This is problematic in several ways:

4) There is a specific chapter (1bv) that now “defines a new market-based mechanism”, and establishes a work program to further implement them. This is a ball, that once it starts rolling, is very difficult to stop. The direction is a proliferation of all kinds of new market mechanisms.