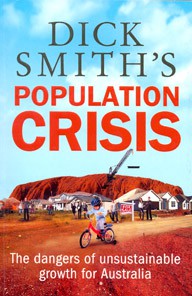 Those who say today’s big social and ecological problems stem from there being too many people on the planet face a special difficulty.

As the Australian ecologist Alan Roberts once said, populationist authors need “to persuade their readers that the main thing wrong with the world was the existence of those readers themselves.” But the “too many people” argument keeps cropping up partly because it gives a neat, simple solution to our environmental problems.

It has often been used to shift the blame for ecological destruction to the poorest parts of the world where the human population is growing the fastest. Once you accept that “too many people” cause our environmental problems, the next question is, which people are surplus to requirements? Which people pose the most threat to the planet?

Invariably, the answer given is “somebody else.”

Millionaire businessperson Dick Smith’s new book on population, Dick Smith’s Population Crisis never escapes this framework. It claims to be a book about making the world a more sustainable and healthy place. But it’s really an extended argument for slashing immigration to Australia to protect living standards and the environment.

Smith is genuinely worried about climate change and the broader ecological crisis, and wants to find solutions. He says population growth is at the root of the most serious environmental problems. For Smith, more people will equal less food, more pollution and more pressure on frail ecosystems.

His explanation for the cause of the climate crisis is typical:

“If the answer to accelerating climate change is a reduction in carbon emissions, then it is absolutely ridiculous not to consider who is causing most of those emissions in the first place.

But the argument does not bear up to scrutiny.

Clearly, a focus on human numbers does not explain very much at all.

Smith also repeats a falsehood often made by other populationist writers: that the world’s population is growing at an exponential (ever-increasing) rate. The mistake is hard to fathom. The world population growth rate is slowing down, not growing exponentially. The United Nations says global population will likely peak mid-century at somewhere between 9 and 10 billion people and fall thereafter.

Smith’s arguments illustrate what the US ecologist Alan Schnaiberg called “thinking in nonsocial ways about social systems of production and consumption.”

That is, if we are to find solutions to the climate emergency, the food crisis and other environmental ills, we have to explore and act upon the causes. These lie in the unequal relationships that exist between different groups in society. We have to look at the huge differences in power between the super-rich and poor, the First World and the global South and, crucially for understanding population growth, the relationships between men and women.

Of course, endless population growth is not sustainable or desirable on a finite planet. But the answer to this also lies in fundamental social change, as the US population writer Betsy Hartmann has pointed out.

“The best population policy is to concentrate on improving human welfare in all its many facets,” said Hartmann. “Take care of the population and population growth will go down.

“In fact, the greatest irony is that in most cases population growth comes down faster the less you focus on it as a policy priority, and the more you focus on women’s rights and basic human needs.”

Smith does not neglect this argument entirely in his book. He says the quickest way to address population growth is to address poverty, admits “the rich westernised countries created the [ecological] problem,” and argues “the god of capitalist economic growth is a false god,” that puts ecosystems in peril.

So how should we tackle capitalist economic growth? Smith says:

“It’s estimated that fewer than 1000 corporations are responsible for about 80% of economic activity … they will object to change and do their best to prevent it, but ultimately they will come to accept that a sustainable economy is in their own best interests too.”

Again, we are confronted with a double standard. Chinese bricklayers, Filipino nurses and Fijian shopkeepers searching for a better life must be turned away from Australia’s borders because they will supposedly cause too much environmental damage.

But the world’s biggest corporate polluters that make billions by driving greenhouse gases up, bulldozing forests and worsening social inequality — they “will come to accept” that they should voluntarily relinquish their power and privilege for the greater good.

Smith’s brand of “border-control ecology” may be well intentioned, but that doesn’t make it any less dangerous or naive. It suggests the main threat to natural ecosystems and social welfare lies in the relatively powerless people outside Australia’s borders who may migrate here sometime in the future. This obscures the real problem, which remains the tiny “home-grown” minority that hold political and economic power and are resisting sustainable change.

Like most populationist explanations of the environmental crisis, Smith’s book urges us to worry most about the world’s least powerful people — the so-called over-breeding poor. Because of this, his “too many people” argument is likely to weaken environmental movements and presents a barrier to finding real solutions.

[Simon Butler is the co-author, with Ian Angus, of Too Many People? Population, Immigration and the Environmental Crisis. The book will be launched at the Climate Change Social Change conference.)