In The Flooded Earth, paleontologist Peter D. Ward repeats a pattern found in a number of other works published in recent years that examine climate change and the environmental crisis. He provides an important account of the deadly implications that climate change could have for the Earth’s polar ice caps — and then undermines his own narrative with highly reactionary social and political conclusions. 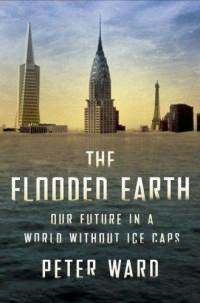 If the dissident German psychoanalyst Wilhelm Reich is correct to note that the “consequences” of “serious scientific insight” can be “very often revolutionary”[1] — if it is the case that the responsibility which accompanies knowledge of impending climate catastrophe “weighs,” in Marx’s words, “like a nightmare on the brains of the living”[2] — it is Ward’s review of climatology rather than his political analysis that make this book worth reading.

Ward opens The Flooded Earth by noting that the highest estimated sea-level rise expected to take place this century by the Intergovernmental Panel on Climate Change’s (IPCC) 2007 Fourth Annual Report — less than 1 meter — is based on conservative predictions regarding the possible future rise in greenhouse gas emissions.. Ward revises the IPCC’s estimate to 2100 by bringing to light the likely 1-3m global rise in sea levels that would accompany a 1m rise in sea levels by means of devastating storm surges, themselves accelerated by warmer oceans and a generally warmer atmosphere.

Ward criticizes reliance on projections of sea-level rise that stop at 2100, given that sea-levels could well continue to rise beyond then. In his view, it is entirely possible that Earth’s atmospheric carbon concentration could reach 800 or even 1000 parts per million by the end of this century— and concentrations would undoubtedly cause the ice sheets of both Greenland and Antarctica to melt. Examining the Earth’s geological record, Ward says sea levels could well rise some 5m this century, and up to 80m over centuries if both ice caps disappear entirely.

Clearly, a 4-5m rise in prevailing sea levels in the near term would be disastrous for much of humanity. Besides directly removing vast swathes of land from agricultural production through inundation — one thinks of the Brahmaputra-Ganges river basin and the Mekong and Nile deltas — such catastrophic sea-level rises would further cripple the human prospect by provoking mass-intrusion of salt-water into aquifers that could otherwise provide for agriculture. Ward grimly adds that the severity of climate change that would provoke mass-inundation the world over would itself be catastrophic in other regards: atmospheric carbon concentrations of 1000 ppm would also have desertified vast swathes of Earth and likely rendered the oceans largely anoxic producers of hydrogen sulfide.

Such a climate catastrophe would surely imply unprecedented human suffering, mass-death, and a precipitous decline in global human population. Ward may indeed be being too limited when he asserts that such changes would amount to a death sentence for “some proportion of humanity.” An imagined future-scenario he describes has India’s military employ nuclear weapons against dispossessed Bangladeshis who flood into the country: that’s a possibility that can not be discounted.

Whatever the value of Ward’s review of scientific findings regarding potential future sea-level rise and the climate crisis writ large, it must be said that the consideration of horror which drives The Flooded Earth in no way leads Ward to propose reasonable or worthwhile solutions for the climate predicament. He argues that there are “no conceivable political means” by which the global South can avoid producing energy through coal in the near term, and he extends the disastrous patterns of Western capitalism into the imagined future by asserting that private-automobile use will necessarily increase astronomically among Southerners in the coming decades.

In his final chapter, Ward follows James Lovelock in calling for a Platonic technocracy to forcibly impose the “necessary changes” that he claims can be employed toward preventing climate destabilization — none of them, it should be noted, involve the abolition of capitalism.

Ward’s platform of unreason includes heavy reliance on geo-engineering schemes and blames human population growth to be the single most important factor that will determine the severity of future climate change. Unsurprisingly, he argues that perhaps the “only way” of effectively averting climate catastrophe is to “lower human population.”

Ward’s populationism and his blindness to systemic considerations are one with the racism he exhibits in much of the text. In an imagined future-scenario Ward provides in a chapter entitled “The Flood of Humans” he provides the reflections of an aging geologist (Ward himself, most likely) regarding a visit to conduct research in the deserts of Tunisia in the year 2060. The man notes that “hunger” is “almost visible” on the faces of impoverished locals, who despite their plight have been spared the “check on overpopulation” by the HIV/AIDS plague.

He certainly doesn’t imagine that the Tunisian children that he describes as “skinny sacks of bones, with little energy” could intervene in history and overthrow tyrants. Fortunately for Tunisians and humanity at large, the mass-popular mobilizations which ousted long-time dictator Zine el-Abidine Ben Ali just weeks ago offer a different, more hopeful prospect.

Instead of provoking catastrophic climate change that would destroy much of life itself, humanity can “do something else”[3] — it can, in the words of Ernst Bloch, “become other.”[4]

Javier Sethness is a libertarian socialist and rights-advocate. He maintains the blog Notes toward an International Libertarian Eco-Socialism.