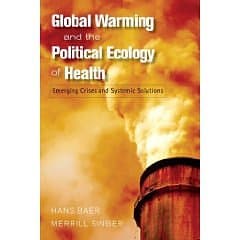 reviewed by Ben Courtice
(Ben Courtice is an Australian ecosocialist. This review is from his blog, BCC:Words)

The looming threat of global warming is both ominous and vague in public discussion. Just what is the threat? Is it just drought and possible loss of the Great Barrier Reef? The public perception, shaped by too-brief media soundbites and disinformation from denialists has made it hard to paint a comprehensive and clear picture for the general public. Yet those who have studied the subject in detail are rightly scared by what they find. This book goes a long way to explaining why, and proposes radical solutions that attack the root cause of the crisis.

Baer and Singer are anthropologists, and the book focuses on the medical anthropology of global warming – not just as it is predicted to occur, but as it is already happening. Heatwaves in Canada and Europe, Dengue fever in northern Australia, Cyclone Percy that devastated Tokelau in the Pacific – contemporary examples fill the book. Writing this review from Melbourne, after the driest six months on record, and the record-shattering, life-taking heatwave and bushfires in February, it is easy to understand that climate change is already here. While single incidents are hard to pin on climate change itself, the overall pattern becomes clear when they are viewed in relation to each other.

The future examined in this book is one where these unfortunately familiar disastrous events not only become more frequent, but feed off each other. For example, at higher temperatures, ozone formation is increased. This might be good in the upper atmosphere, but at ground level ozone damages lung tissue and increases the incidence and severity of diseases such as asthma and emphysema. The authors document how this seems to have increased the deaths in the 2003 heatwave in France. Combined with an increase in dust and pollen, it is no wonder then that the incidence of asthma is on the rise.

Baer and Singer introduce the concept of ecosyndemics to explain how multiple disease and other factors combine to multiply their effects in a climate change scenario. To explain syndemics, they write that diseases “as well as other health conditions that are not always labeled as disease per se (e.g., malnutrition, drug abuse, violence, victimization), do not exist in nature in isolation… An example is the contemporary interconnection of AIDS and famine in many of the nations of southern Africa.” In this example, deaths of adults from AIDS has created a new vulnerability to communities that now have to care for ill AIDS sufferers and the children and old left behind, with increased difficulty providing food and basic necessities.

A case study of Hurricane Katrina rounds out the explanation of ecosyndemics. The toxic pollutants and bacteria in the floodwaters; the spread of mosquitoes bearing diseases like West Nile virus; the growth of the rat population (another disease carrier); asthma from breathing in mold spores; and the damage done to hospitals by the storm. “it occurred in one of the wealthiest, resource-rich nations in the world, and while the emergence of a devastating syndemic fortunately was averted – as much by luck as by public health response – the grave potential was evident as was the specter of what such a disease event might spell in a resource-poor setting.”

The book is rounded out with a more political evaluation entitled “Adaptation Versus Mitigation”, presenting a thorough critique of many and various approaches to combating climate change, neatly categorised by political method and the various international and national regimes. All are criticised for, in the authors’ view, failing to transcend global capitalism. They call for the creation of a “Democratic Ecosocialist World System” for a healthier planet.

The book is written in an academic style, but this non-specialist reviewer found it easily understandable. It is remarkable in its combination: a thorough survey of an aspect of global warming that causes a lot of fear, plus a thought-provoking discussion of the political response needed. While the former is poorly disseminated to the general public, the latter remains under-discussed among the many new activists that make up the movement to stop climate change, and on both counts this is a useful book to read.