From Morning Star and Another Green World

The Age Of Stupid is a film that every one of you should watch – it’s powerful stuff.

It is set in 2055 with Peter Postlethwaite playing the last human on the planet, living in a gigantic metallic base 60 miles north of the Norwegian coast. 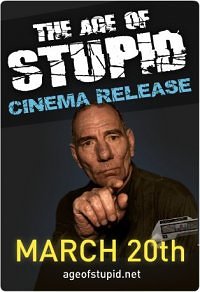 It is an archive for the whole of a now-extinct human civilisation. Postlethwaite sits among servers that contain the entire digital remains of human culture from episodes of Big Brother to Einstein’s speech on relativity. The remains of the world’s greatest art collections are scattered around in crates.

This is docudrama at its very best – a powerful warning of the stupidity of ignoring climate change and pretending that it is not happening. Postlethwaite reviews video archives of refugees in Jordan forced out of Iraq by a war for oil, Nigerian women who have to wash their fish with detergent to get rid of the oil spilt by the petroleum industry and a New Orleans oil company worker made homeless by Hurricane Katrina.

The film places climate change firmly in the context of corporate corruption, wars for oil, colonialism and capitalist excess.

The clarity with which it explains the reality of human life on Earth in the third millennium makes it essential viewing. The message that capitalism is a system that must be transcended is crystal clear.

It draws on a powerful heritage of radical film-making from The Battle Of Algiers to director Franny Armstrong’s McLibel film. It’s informative, politically engaged but engaging.

One criticism is that many of the solutions to climate change put forward are “stupid.” Carbon trading, biofuels based on rainforest destruction and nuclear power are not going to save humanity.

The danger is that viewers will watch this amazing film which calls for the transformation of our economy, society and culture and simply sign a petition or write to an uninterested MP. However, if it inspires even a minority to take more radical action, it will have achieved something very special.

The Age Of Stupid is on general release this weekend and I would urge Morning Star readers to buy tickets and take some friends – in a system dominated by Hollywood, independent film-makers need all the friends they can get.

Visit www.ageofstupid.net/screening/uk_cinema_release to see where the film is being screened.